Playing as I do, I took small left over cropped pieces from larger abstracted photgraphic images and rolled acrylic paint over them selectively with a narrow paint roller (brayer). As I was finishing, I rolled the remains of the colour onto strips of an old white cotton bedsheet from my mother's house - this was all about using up left overs, after all! I then experimented.

I stitched a small square from the pile of painted croppings onto the cotton sheeting and added some other rows of stitching to add extra texture. It was interesting how much the parallel stripes of rolled ink suggested the high rise buildings from which the small photographic image had come. They seemed to have come full-circle. 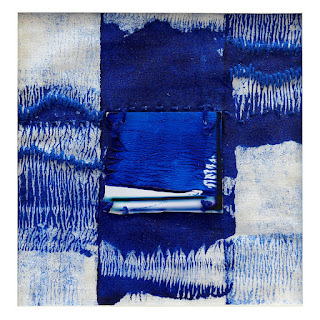 Then, I assembled small croppings from the abstracted photographs. 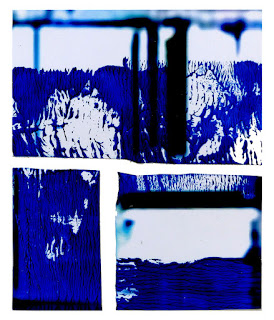 In this, it was interesting how strongly the black elements in the photos came through the ink creating depth a quite different and less static effect which I may explore further.

It's always encouraging when idle experiments and 'what ifs' generate thoughts for what may come next.

Posted by Charlton Stitcher at 17:04 No comments:

I found this card in my stash of images yesterday afternoon when I was searching for intriguing images by other artists to include in my current sketchbook.

It is called The Quilt, which seemed appropriate, and is an original wood engraving by Fiona Hope. Further examples of her work and that by other members of the Society of Wood Engravers are to be found here. I think I bought the card when I was in Scotland and paid several visits to the studios of artists in Aberdeenshire who were exhibiting in North East Open Studios a few years ago - but that may not be the case as I'm not organised enough to annotate my cards when I buy them! 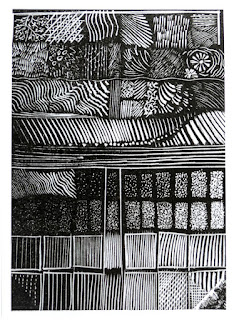 The card has a decidedly textile feel to it and I was fascinated by the range of marks so I set about recreating them with a black Uniball Signo roller ballpen on white paper (thereby inverting the images). I dotted, cross hatched and created thick and thin vertical and diagonal lines and arcs within a hand-drawn grid. 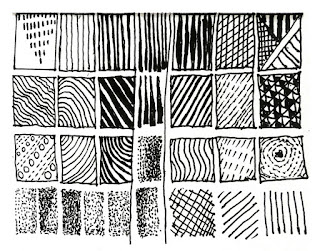 An excellent, idle occupation for a rather chilly afternoon in Coronavirus lockdown.

Posted by Charlton Stitcher at 19:54 4 comments:

I'm working on a larger piece of work combining images of modern high rise buildings with suggestions of what existed before. There is explanation in the last post of what is in my mind. 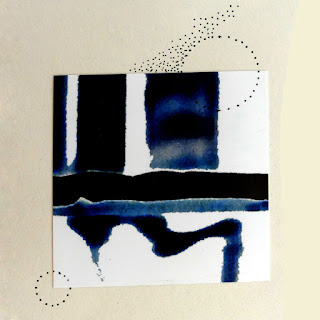 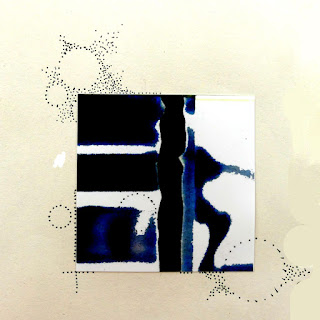 Here, I've used heavily abstracted and very much enlarged croppings from photos of high rise buildings in Sydney, Australia, taken on a trip a few years ago. I've made marks over and around these images with a fine black Uni marker pen using circles and dots.

These marks suggest possible stitching once the main images are printed onto cloth. Alternatively, I may want to incorporate images printed onto photographic paper into the final piece as this better suggests the shiny surface of plate glass.

I know from past experience that this will give me problems if I want to stitch. It is extremely hard work to stitch through good quality photographic paper and stitches have to be quite far apart so that they don't create perforations or merge into one another and create undesirable holes!

Much to think about then.

Posted by Charlton Stitcher at 19:37 5 comments:

Circles (usually signifying meeting place, campsite or water hole) and dots (indicating the presence of sacred information not to be shared) are extremely common in the art of Australia's Aborigines as they explore their heritage in a modern context. The simple symbols such as dots and circles, were originally used for sand paintings, to explain things, and in cave paintings or on tools. Often these symbols have different meanings depending on context and local tradition.

I've been exploring and then experimenting to find ways that these symbols can be represented in stitch for work I am developing. I've included here a sample of the pieces. In each case, I've grouped and interpreted them to suit my own purpose. 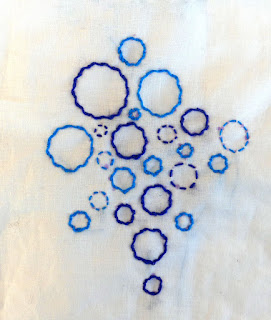 Below, this whole grouping of circles means star. Again, I've interpreted the image to suit my own ends. 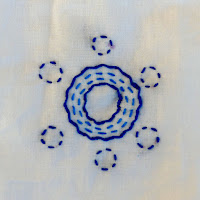 Before the arrival of Europeans, Australia's Aboriginal languages were purely spoken and there was no cultural history of writing. Instead, there was huge reliance on complex oral histories and rich 'dreamtime' recountings to pass on their culture. Now their modern artwork, often on a large scale and using acrylics, uses these symbols to represent their rich spiritual life and their beliefs, their ways of living, their surroundings and the animals and birds that live in their lands. 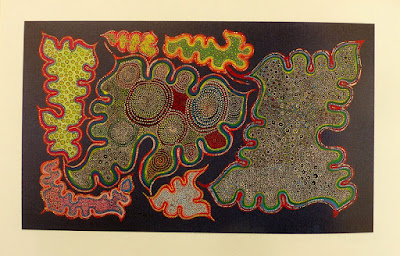 I find their work fascinating and dramatic - and like nothing else I have ever seen.

We had a trip to west Cornwall last week, before we learnt first hand the full implications of social distancing and isolation and the frightening need for it.

We visited Tate St Ives - something we had been wanting to do for some time. The gallery is not large but there was so much to admire. For someone who enjoys modern abstract art as I do, it was fascinating. 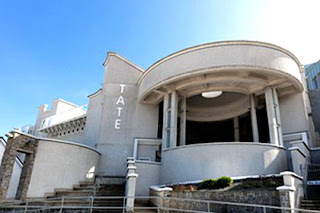 What made this collection particularly interesting for me was the strong connection between the place of St Ives and its artists and their work. Most had close direct connections to the town and to West Cornwall and either worked with or were friends of Ben and Winifred Nicholson and Barbara Hepworth.

The work in the gallery is drawn from the Tate's own collection and highlights the national and international significance of the historic artist community that continues to thrive in and around the town. There was work to be seen by many well-known 20th century names - Terry Frost, Henry Moore, Piet Mondrian, Mark Rothko, Bridget Riley, Naum Gabo (more of him in another post) and, of course Barbara Hepworth and Ben Nicholson. There were also a pleasing number of new-to-me names whose works were also shown.

I've chosen a slightly random selection of works of both kinds that caught my attention and appealed to me for one reason or another. For some pieces, I enjoyed the pleasure of coming close to previously unseen work by favourite well-known artists. For others I've posted, I was attracted from across the room to work by an artist I couldn't give a name to but yet felt a strong impulse to consider more closely. 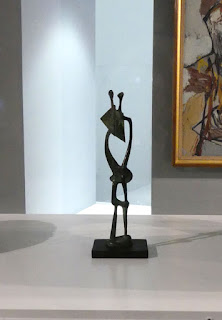 This lovely, delicate little maquette by Henry Moore was made in 1950. It was a model for a much larger bronze sculpture made for Glen Kiln Sculpture Park in Dumfries and Galloway till its theft in 2013. This has very special memories for me as I visited this lovely place with my mother as a teenager in the early 1960s and we saw this and other impressive sculptures. It is a very vivid memory for me and I was delighted to relive the visit through this maquette. 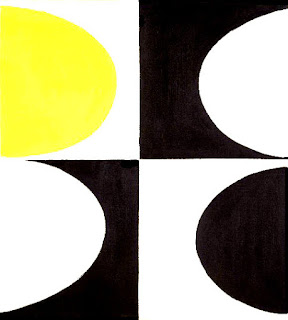 
Sir Terry Frost's abstracts always appeal to me. It's so often the black and white and the simplicity of the images that call me in and this one was no exception. 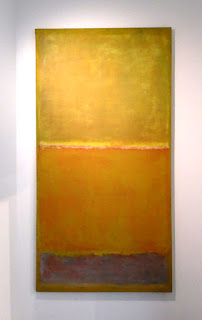 Here, an early work by Mark Rothco. His use of luminous layers of colour always fascinates me,

And now, a pair of works by Dame Barbara Hepworth and Ben Nicholson who worked together for almost 20 years, and were married for 13 years. It seemed appropriate to post their work side by side.

And lastly, a small selection of works by new-to-me artists or those whose work I knew of but had rarely seen. Each of these called to me from a distance as I walked around the galleries.

It seems we just managed our visit to Tate St Ives in time. The gallery closed yesterday because of  the Coronavirus.

Such crazy and worrying times! I hope these images will bring you some cheer in a very small way.

Posted by Charlton Stitcher at 17:04 4 comments:

Very careful stitching involving counting threads and keeping to straight lines along the weave of the cloth are all most unusual for me. 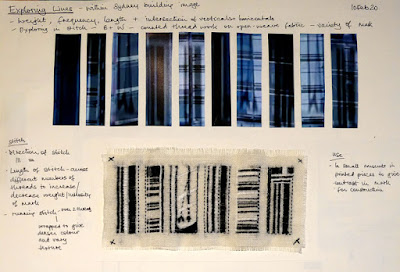 But it seemed a good way through stitch to explore the geometry of modern high rise buildings.

This page from my art journal explores elements of the strips shown above the stitching. These strips were found in photos of office blocks taken in Sydney and Vancouver which were manipulated and cropped to bring out line and shape in the reflections.

This time, I was most interested to exploit what I saw using black and white thread.

Posted by Charlton Stitcher at 22:49 5 comments: