I've experimented for the last few days laying down tracings of a tree outline in various sizes over one another and then cutting round the outlines and between the trees to create lines within the shapes and draw attention to the outlines ...

to work with shadows ...

and to cut out look-throughs ...

Last of all, I began to abstract further, colouring in some of the shapes within using graphite sticks and a paper blending stick.

This is very much work on-going and I hope the strange lighting conditions I seemed to need to produce shadows I could photograph allow the work to be seen adequately!

Posted by Charlton Stitcher at 20:03 6 comments:

I've been playing this afternoon with the colour potential of my new A3 printer ... just a little bit so far.

Two photographs of a stream bed, each slightly different but stuck back to back and enhanced, with marks added and overprinted, folded and partially cut, gave this: 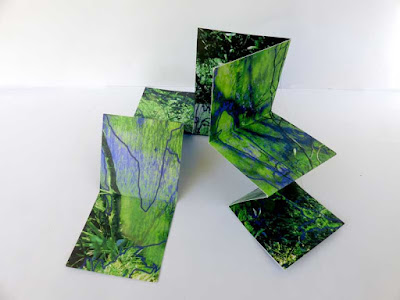 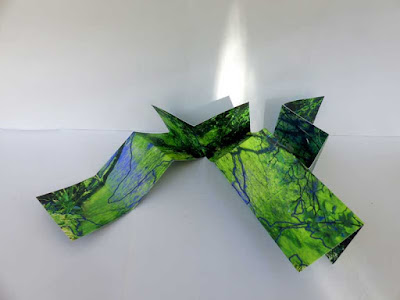 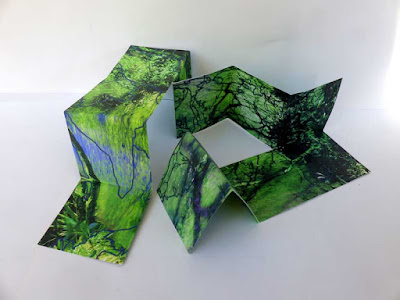 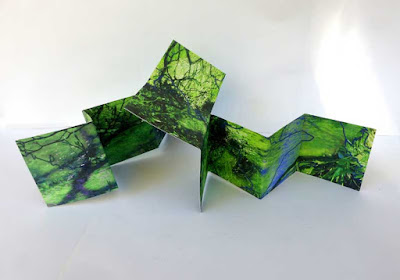 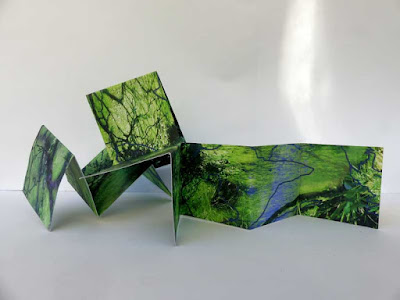 A book of pictures, an unfolded box, a random 3D structure? The different forms that are possible with this fold are themselves an entertainment!

Posted by Charlton Stitcher at 19:37 8 comments:

Black, White and red and Stitch

I've been playing around with the idea of stitching on top of the hedge images I've posted on several occasions over the last two months. For this experiment, I settled on using parts of the image in the simple accordion fold book shown here. I'm hoping eventually to achieve a pair of pieces to be hung one above the other and using the complete versions of both the positive and inverted images in that book, though time will tell.

Two experimental versions have followed in my evening stitching time. Both are shown below, very much as work in progress. On each, I've kept the stitches simple, using only a basic satin stitch for the trunks of the trees and small single-wound French knots to suggest leaves. In each case, I've been working on the placing and density of the stitching as I don't want to lose the original images by covering them in stitch. The first and, I think, so far the most successful, shows a black image on a white ground with red stitching in No. 12 pearl cotton to pick out some of the individual trees. I've played with the position of intense stitching and which areas to leave completely unstitched. I don't yet feel I have this right but this trial has been most useful.

The inverted image, white on a black ground, has seemed much more difficult so I've worked several stitching alternatives on the same piece. 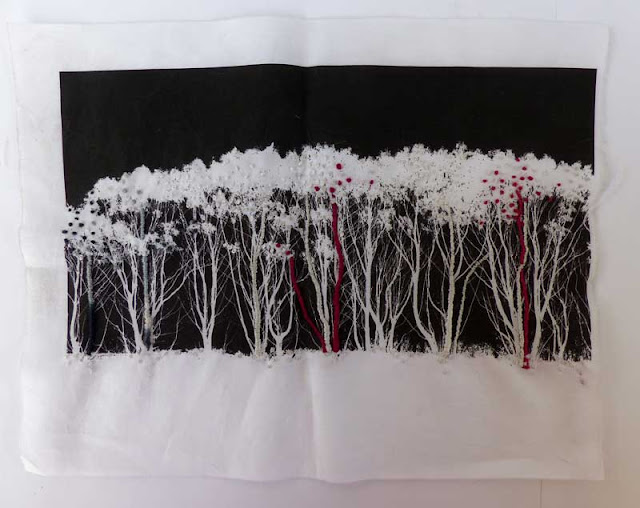 Red stitching appears to jump forward too much and white stitching disappears, leaving only a vague feeling of texture when viewed from a distance, even when I used No. 8 pearl cotton. Another alternative I tried was to use a variegated black / grey / white thread but again this gives much less impact than in the first piece above.

I don't yet feel the two pieces would work well together. I'm still considering alternatives as I work further on them both.

I spent time earlier this week playing with digital mark making - enhancing and printing to A3 a photograph I'd taken recently which included strong abstract marks when enlarged and cropped. I then put the image through the printer for a second time to overlay it with tree outlines which I placed and printed randomly - at least as randomly as I've so far found to be possible within Photoshop Elements print options. I folded the sheet using a simple structure that involves partial cutting into thirds and then a form of accordion folding. 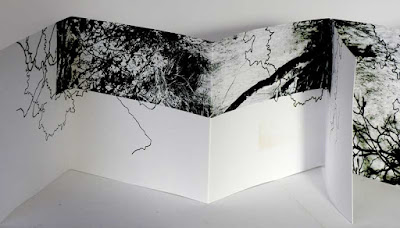 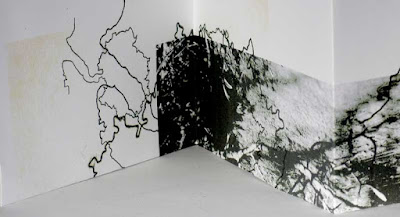 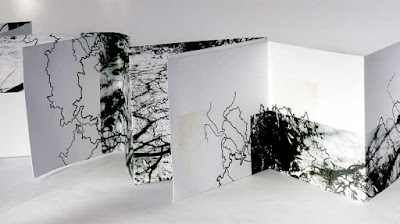 In May I'm going to do Pixeladies Course 3 which with luck will help with this overlaying issue (and many others, hopefully) and enable me to have more control over what happens when I undertake this kind of mark making. If the quality of previous courses with these two ladies is anything to go by, I'm sure it will be excellent.

What a lovely day we had yesterday. We went up to Winchcombe in the Cotswolds north of Cheltenham. The sun shone from early morning and it was cloudless and warm (an unusual 20+ c). This is always a lovely area and it looked especially good with the sun on the pale ochre buildings and the trees casting gentle leafless shadows. It was a lovely way to welcome in spring.

In the morning in fact, this was a trip with a difference since we walked round Winchcombe completing a 'murder mystery' trail that my husband had been given for Christmas. This was great fun and deciphering the 23 clues forced us to look hard at the old buildings, read the information plaques on the walls and drink in the history and prettiness of the place, including this delightful row of cottages leading down to the river ... 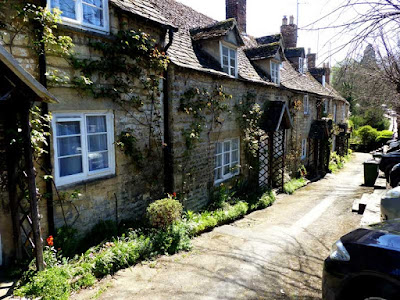 ... and to spot small instances of quirkiness, including a pair of metal posts either side of a short flight of steps up to the church which were topped by little elephants the size of my hand - very tactile - but it was hard to work out their purpose or the reason for their choice. 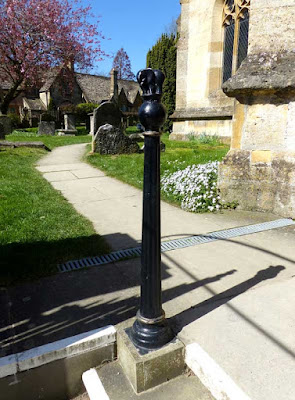 Then there was a dog gate beside a stile with an almost canine face on top (the whole lifted up to allow the dog to pass through rather than climb the stile) ... 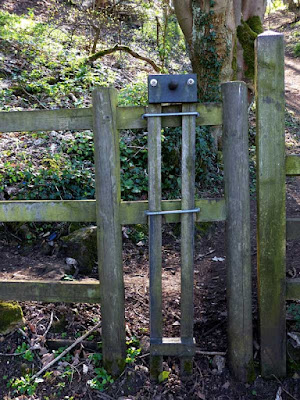 ... and particular doggy nonsense, these gems on dog mannequins in a pet shop window. 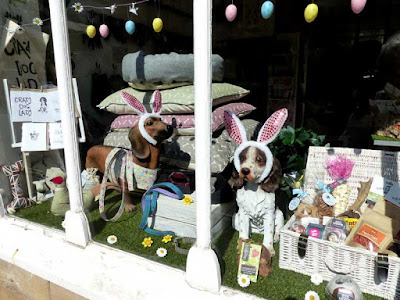 Everywhere there were spring flowers, hedges bursting with blossom and sunlight glinting on water ... 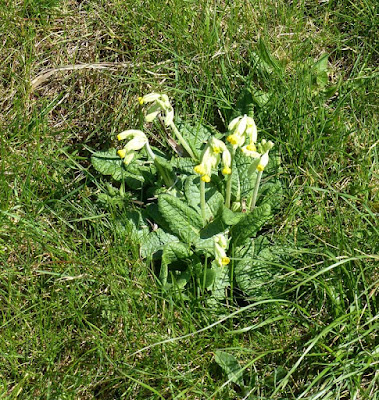 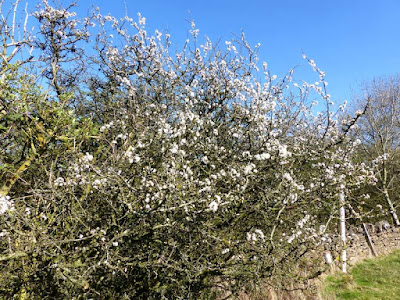 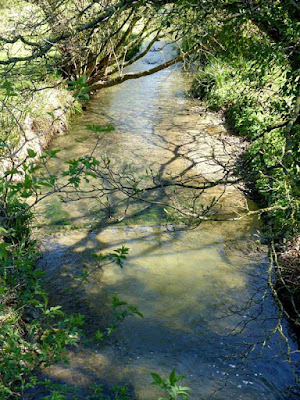 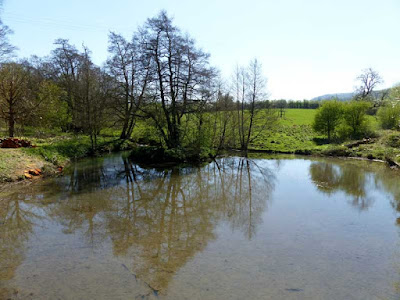 All in all, it seemed a most unlikely setting for a murder!

After lunch, we completed a short section of the Cotswold Way that we hadn't done before. For those who don't know it, the Cotswold Way is one of the Uk's sixteen long distance National Trails. Each one takes the walker through examples of the country's most beautiful rural scenery. This one is about 100 miles in length, all along the top of the Cotswold escarpment. Over the years we have walked many sections and the views are always spectacular and every mile a pleasure to walk.

This time, our goals were very modest. We were heading for the neolithic long barrow of Belas Knap, a round trip of a mere 1 1/2 miles. We walked up the steep face of the escapement from a small roadside car park and through a wood ... 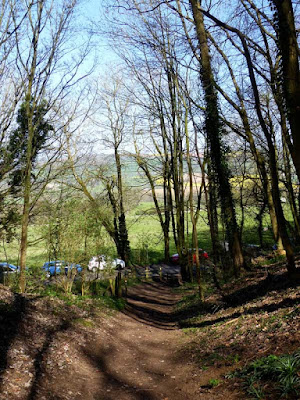 ... and out onto open grassland and beside a stone wall for panoramic views. 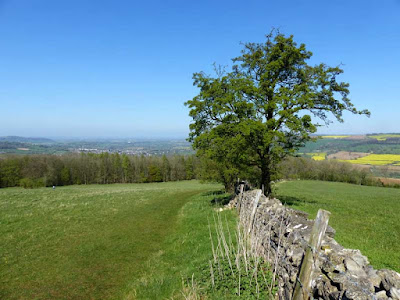 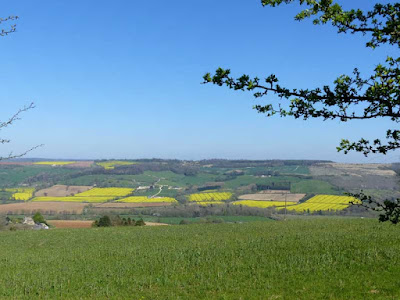 Then the walk finally took us along a sunken, tree-lined path to reach the Knap. 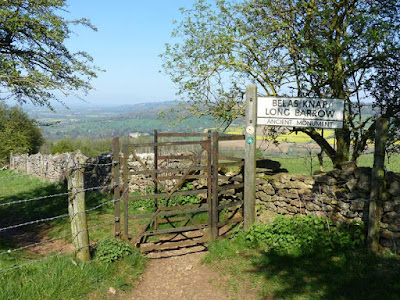 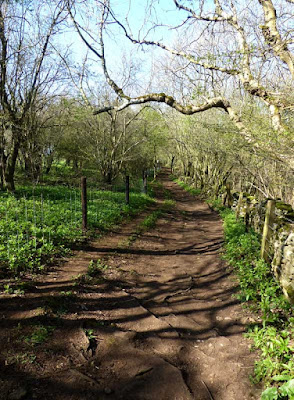 The long barrow was hard to photograph as the enclosure around it was small but further details and much better photographs can be found here on the English Heritage website. 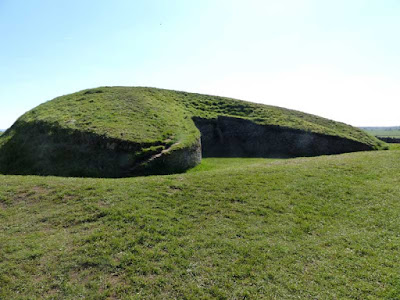 Tomorrow the weather is forecast to return to normal - cool and showery - and more typical of  a British April. I hope we've not just had summer!

Posted by Charlton Stitcher at 18:40 2 comments:

Yesterday, I finally completed the version of star accordion artists' book that I first posted about last month. 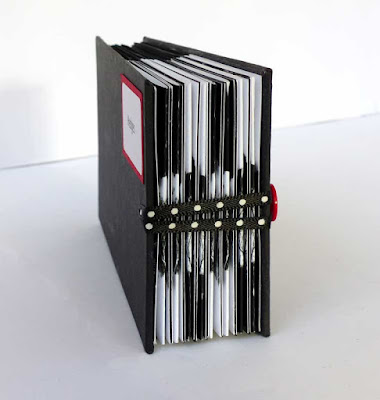 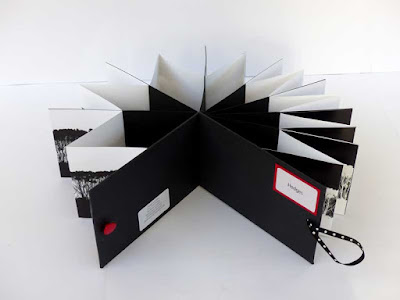 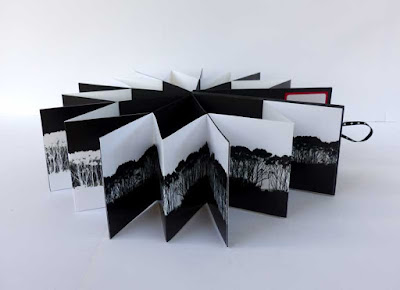 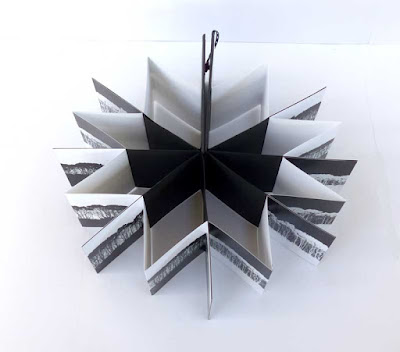 Before adding covers, a closure and a title, I photographed the piece from a variety of angles. The more sculptural of these no longer worked after the addition of the covers with their extra weight but I've chosen one to show here, mostly because of the shadows it cast in sunlight. 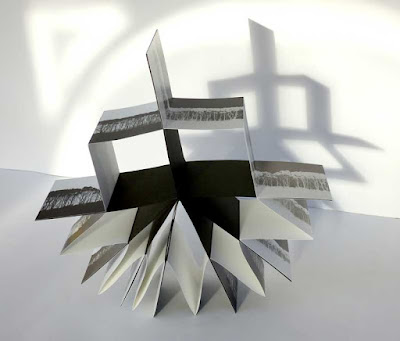 This has been an excellent learning experience, although I still have some issues to resolve for future books of this kind - mostly to do with the strength of spine where I feel the structure is very fragile.

However, for the moment, I have plans for something rather different ...