Speedy progress is being made towards completion of my work for Brunel Broderer's exhibition at the Gardens Gallery, Cheltenham, in early September - which is just as well as the date for submission is fast approaching!

As explained in a previous post, my main piece explores the imagery found in Catherine de Medici's garden at Chenonceau in France's Loire region. The work is a metre long and develops studies of small sections of the planting in the Chateau's formal gardens.  Below are two of these studies, which have evolved from photographs taken during my visit in July.

In developing this work, the first thing that intrigued me was the height difference in the garden between the standard rose trees planted at intervals along the borders and the smaller plants beneath. The planting seemed to symbolise the wealth and social class differences between Catherine de Medici as wife of Henry II (and therefore Queen of France) and her subjects.

The colour imagery in the garden and in my pieces tells a far more complex and dark tale with its planting in black (or near-black), and white flowers with acid green foliage. Catherine is known as the Black Queen or sometimes the Black Widow and the inclusion of the colour in the garden marks at its simplest level her life after the king's death when she wore black trimmed with white as a sign of mourning everyday until her own death in 1589. 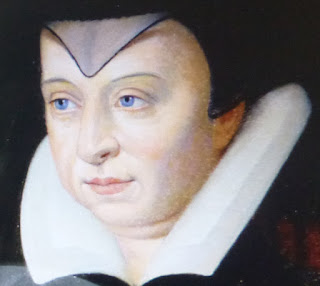 However, as well as its association with death and grief, black is said to symbolise power and authority. Although largely shunned by her husband in his lifetime, Catherine had considerable power and influence after his death which she exercised ruthlessly as the mother of his sons. She has been described as probably the most powerful woman in 16th century Europe as she fought for the rights of her sons to govern.

Black can suggest evil and cruelty and throughout this time, Catherine is known to have been callous and at times brutal. In her later years, she was linked with the excessive persecution of the Calvinist Protestants (or Huguenots) and was blamed, perhaps wrongly, for the St Bartholomew's Day Massacre in 1572 in which thousands of people lost their lives.

Black, being the absence of colour, is sometimes associated with mystery and intrigue. Catherine was known also as the 'Sinister Queen' as she was supposed to have an interest in the occult and there was the suggestion of witchcraft. There is much mystery behind the true nature of her involvement.

The shadowed and flipped repetitions of the rose trees and their under-planting in my pieces are intended to suggest this mystery and to hint at the many deaths that may have resulted from her ruthlessness.

Although I was aware of these sinister undercurrents as I walked around the garden, strangely the overwhelming feeling that I was left with after my visit was of calm and order rather than horror and darkness. Perhaps I was reacting only to the garden on a hot summer's day with its orderly plants and unusual colour palette. 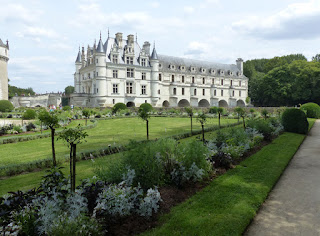 Odd though that one woman's tangled and difficult life and its aftermath should have produced such mixed feelings. I hope that my pieces hint at this ambivalence.

* Details of the exhibition are given in the sidebar of this blog.

Posted by Charlton Stitcher at 16:44 8 comments:

I may not have posted much this summer but I have been busy stitching and holidaying - and holidays set me off working in a surprising way.

During a visit to France in early July, we visited the Chateau at Chenonceau in the Loire Valley region. This extraordinary building, surrounded almost completely by a moat, is in fact on the banks of the River Cher, a tributary of the Loire and has a unique history. 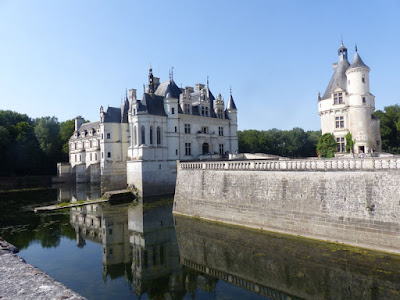 Known as the Chateau des Dames because of its association with a series of powerful women (often the wives of kings) from the 16th century onwards, it is a beautiful and surprisingly intimate chateau with an arched gallery which completely crosses the river. 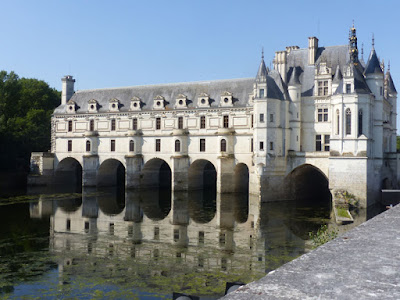 In the mid 1500s, it was presided over by Catherine de Medici, wife of Henry II of France, and, in his life-time, by his mistress and favourite, Diane de Poitiers, both of whom made alterations and improvements to the original structure. They both also initated work on formal gardens on the banks of the river either side of the chateau.

It was these two features that caught my eye, particularly with Brunel Broderers' upcoming Bloom exhibition in mind, but I was especially amused by the fact that the mistress's garden was several times the size of that regarded as belonging to the wife! After the king's death, Catherine de Medici didn't hesitate to bannish his mistress and regain control of the whole property.

I found the simple structure of Catherine's garden delightful. At the time of our visit, it was planted out with a very restricted colour palette. Black (or as near black as is possible) and white-flowered bedding plants were laid out along with acid or blue-green foliage between the permanent standard rose bushes. I found the height difference fascinating and the predominantly black and white colour scheme calming and original. 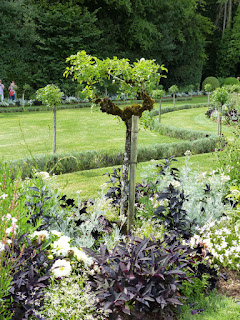 The colour palette was chosen to commemorate the 500th anniversary of Catherine de Medici's birth in 1519. She is known as the Black Queen, partly because of her habit of wearing black throughout her life after her husband's death but also, perhaps, referencing her (disputed) reputation as a harsh and manipulative queen.

Visiting this garden diverted me from my original thoughts for Bloom onto a much more rewarding and interesting path. I fortunately took many photographs. These have formed the basis of a small series of work exploring shape and the imagery of the height difference and the colour palette.

Posted by Charlton Stitcher at 19:33 6 comments:

Work in Bloom in Cheltenham

The work to be seen in The Gardens Gallery in Cheltenham shows the wide variety of approaches and outcomes developed by the members of Brunel Broderers.

Carla Mines is particularly concerned in her work with issues of pollution and the environment. She has chosen to focus on the effects caused by microscopic creatures as they multiply at a furious rate to produce the extaordinary surge of growth that is described as a bloom.

She has used machine stitch on disolvable fabric to describe the skeletons of those tiny creatures that live in their billions in water across the world. Shown below is a small length of her piece, ready to be dissolved. 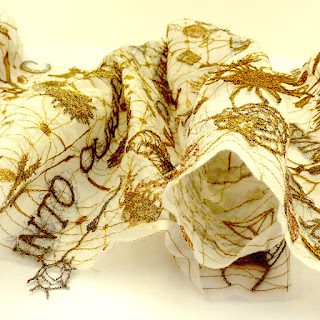 Liz Harding has developed work using striking colour to explore growth in gardens and has looked at flowers from unusual persopectives. 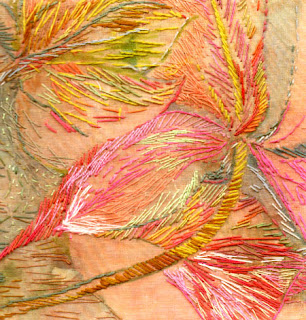 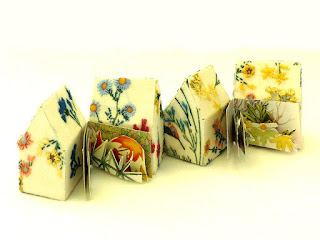 Linda has revisited her favourite haunt of Marrekesh and based her work on traditional flower motifs found in buildings. 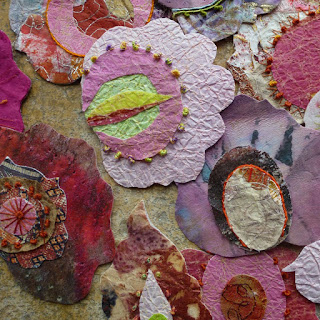 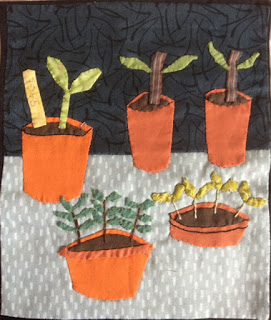 And I, finally, have pursued further my interest in repeating pattern and form in landscape and the use of photographs to develop imagery, in this case used representationally.

I was struck on a recent trip to the Loire Valley in France by the beautiful garden of Catherine de Medici found at Chenonceau and have developed a small series of pieces from photographs taken in the garden (further explanation to follow in future posts). These explore aspects of the early history of the chateau. 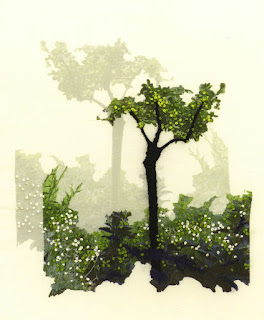 Details of the exhibition can be found in the sidebar of this blog.

Posted by Charlton Stitcher at 10:48 4 comments:

Brunel Broderers in Bloom in Cheltenham

I will have new work in this exhibition with Brunel Broderers at the Gardens Gallery, Cheltenham, from Wednesday 4th to Tuesday 10th September. Our theme has been growth and flowering and gardens under the title Bloom. 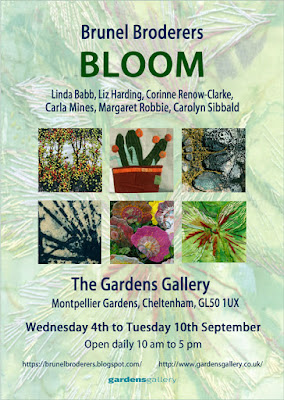 As always, members have approached the subject each from their own perspective. Further glimpses of our work can be found on our blog at https://brunelbroderers.blogspot.com/ - and in subsequent posts here.

The Gardens Gallery is an excellent community venue situated in Cheltenham's Montpellier Gardens. The building was built in 1900 as a companion to the nearby bandstand where summer concerts are still held regularly at weekends. It was extensively refurbished and repurposed in 2006 -7 thanks to funding from the Heritage Lottery Fund and Cheltenham Borough Council. 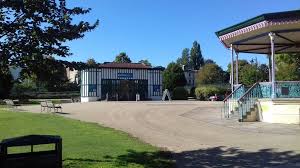 Car parking and a café can be found close by. We will be stewarding on a rota throughout the exhibition - and very much hope to see visitors a-plenty!

Posted by Charlton Stitcher at 15:48 No comments: