The primary act of drawing is circumscription - you place the tip of a mark-making tool on a ground and draw a line that goes around the subject represented ...

and then ... Lines don't actually exist outside of drawing them.

I came across these two apparently slightly contradictory quotes about drawing when dipping again into Tania Kovat's beautiful book Drawing Water. This is a book I love and about which I blogged here at the end of March.

Among so many other things, the book is full of thoughts about drawing, its meaning and ways of approaching it. I have been thinking about those thoughts ever since I first read the book so I went in search of quotes from it when I found this sample in a small pile of (sadly undated) drawings done sometime last year. It seemed to fit so neatly into the comment about 'circumscription'.

Although I can't remember exactly when I completed it, I do remember clearly that the circumscription of the shapes was the most important thing for me at the time I was drawing - as it so often is. I set out to delineate the outline of the gourd and the branch, the forms within and the shapes of the shadows cast as my primary concern, together with the pattern they seemed to make. 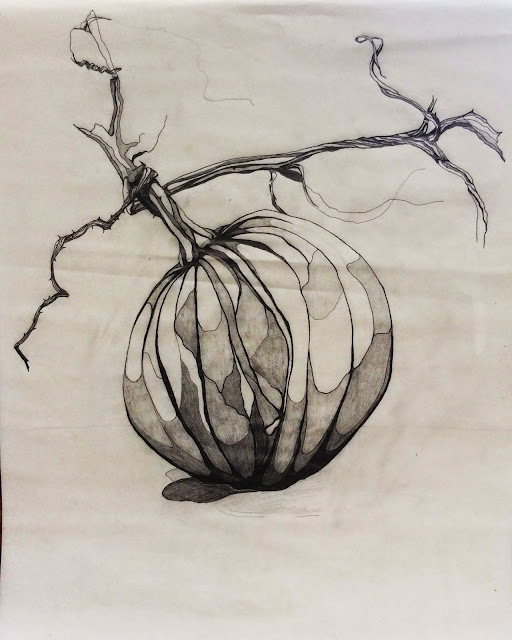 Strange to think that the lines were in my mind rather than on the gourd and the branch I was drawing and that they did not in truth exist purely as lines at all. ....

Playing with marks and letters

Some play today - with letters and a few of those marks I've been generating ... fun and games with brush, pen and ink, a cardboard window and the scissors ... 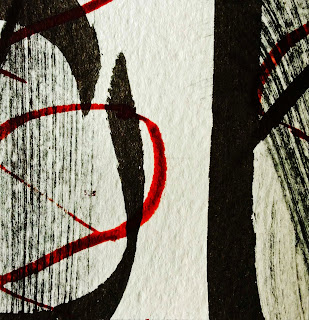 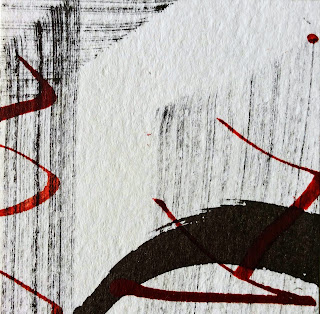 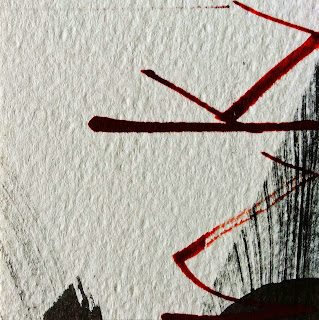 I think this is nothing more, just fun and games (and a set of cards to be sent to friends when the need arises) ... but nevertheless good to do.

Posted by Charlton Stitcher at 11:59 4 comments:

I was told the other day by a scientist friend of mine that the true blues in the colour spectrum are really what is called cyan blue such as we now find used in the computer printer - so here I give a small and random selection of strong, bright 'true' blue.

The first few come from my archives, mostly involving use of  image manipulation, and include two colour experiments with Photoshop Elements.

Some paper tearing fun using paper rollered (brayered) with pure acrylic colour and enhanced a little (and that I could have posted on almost all the Roy colour posts). 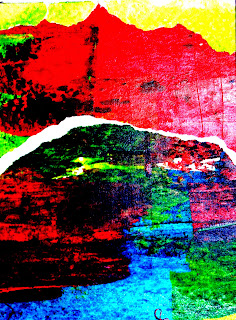 And a little acrylic ink colour test exercise from way back ... 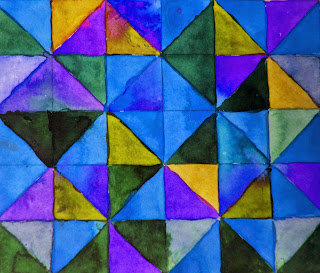 The next four were taken when visiting our son and his family in Reigate, Surrey, first of all fairground fun ... 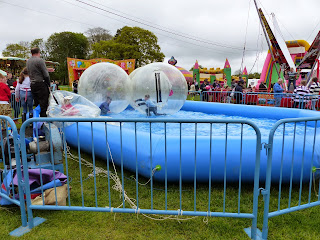 The alkanet (a tall and hairy relative of the Forget-me-not) flowering in hedgerows all around the town ... 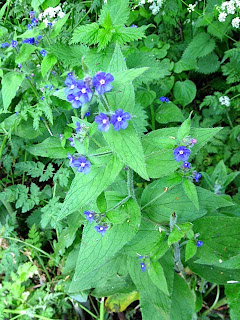 And blue doors - there seemed to be lots in Reigate ... 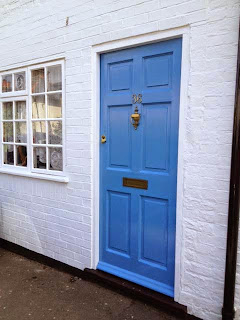 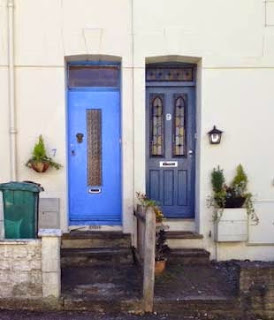 The last I spied when I was driving through the southern Cotswolds near Cirencester. 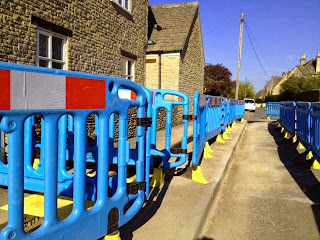 If you're not sure why blue is my theme for this post, details of Roy G Biv searches can be found here.

In the last few days, while working to produce one mark a day in a special sketch book, I've been investigating the use of the wet in wet technique with various inks and with acrylic paint. This was not a new technique to me with water colours, but with inks and acrylics, the small pieces shown below are first attempts.

The first shows a heavy application of black acrylic dropped onto wet paper and left to spread and dry naturally to form an amoeba-like shape - high on drama and low on skill! 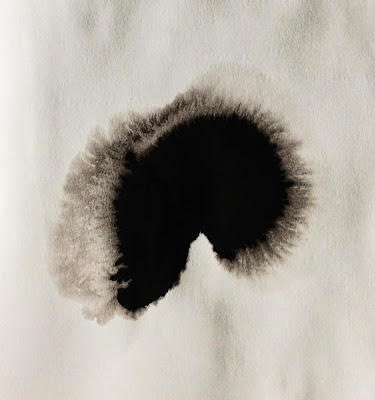 After several other slants on this idea that produced varying success (but that is what this is all about), I turned to a landscape theme, using black fountain pen ink (Quink for UK readers) dropped onto wet paper. I then pulled out various lines with the end of a brush to break the 'horizon'. The result seemed very reminiscent of many a Norfolk coast salt marsh ... 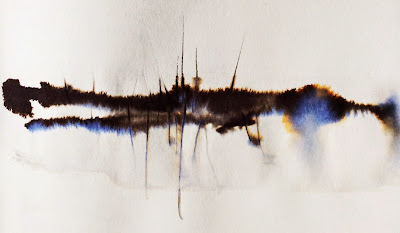 In the next, I used black Quink again, this time over-printed with Indian ink using a print block of mine to give a much more abstract result. 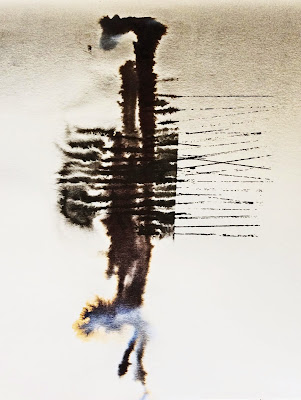 After that, I went back to the landscape theme, this time with Indian ink and a small streak of resist in a white oil pastel. 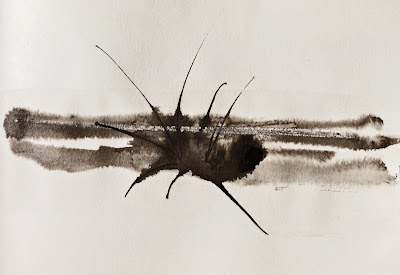 After many more - I've really been on a roll in recent days - I felt compelled to introduce some colour and used a vivid mid-blue oil pastel to draw in a horizontal. I then added the ink - Quink again as it often breaks into a blueish colour to link to the blue horizontal - and some lines with the end of the brush to break the 'horizon' again. 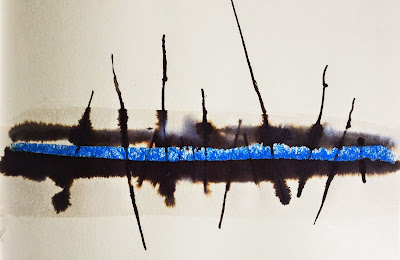 I've generally been avoiding colour in this exercise as I really wanted to focus myself on the mark itself. However, this time I couldn't resist the temptation, though it seems to have photographed rather crudely.

This whole exercise is proving extraordinarily liberating for me. I feel able to let myself go into unfamiliar territory without worrying about errors, themes or any other pre-occupations. I can well see how some artists have such daily 'warming up exercises' as part of their normal practice.

Posted by Charlton Stitcher at 22:33 2 comments:

This week as I explore marks, I've been looking at shading. negative spaces, and what gives a 3D effect, among other things.

There are three examples here, first of all shading with a 4B graphite pencil between the outline of an image I've been playing with quite a lot recently. 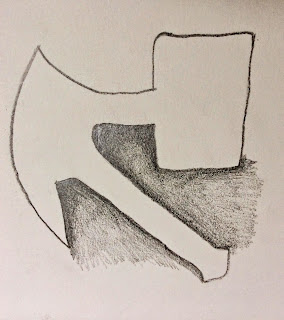 Then there is the unexpected result of using a black Conté stick flat on its side and pulling it down cartridge paper twice to shade gently, and leaving a small space between each pull. The 3D effect was a great surprise to me as in the original, the negative space between the Conté marks seems to jump forward dramatically especially with half-focused eyes. 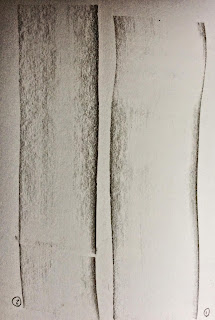 And in the last, the result of moving the Conté in an arc and then overlaying again with broken layers to give texture and depth. 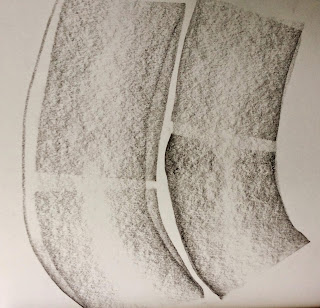 Nothing earth-shattering here but lots of enjoyable thinking in progress ...

Posted by Charlton Stitcher at 19:37 No comments:

A first attempt at combining abstract bridge images with stitch, this image was printed on paper and the free stitch completed on organza and then laid over the top. 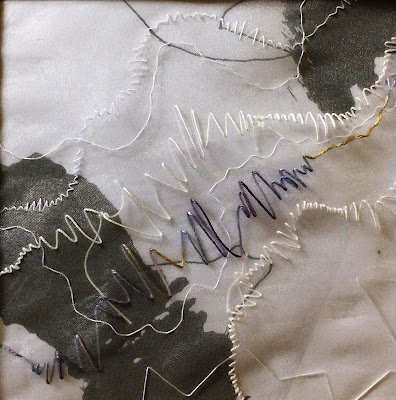 Much work still to do but I think I can at last feel ideas stirring ...

On a Thursday morning, I go to a small art group of 4 or 5 members in a nearby village. This is always a pleasure and it gives an opportunity for trying out different media, for uninterrupted work on the ideas that are running through my head and of course for 'arty' chat,

This morning was no exception. I played with the idea of overlaying one of the marks that I've been making recently with some of the bridge shapes that have developed gradually from a photograph taken last autumn in Pennsylvania.

Some of the results are shown here. In this case, the mark I chose was made by rolling a mop brush laden with black acrylic over cartridge paper. 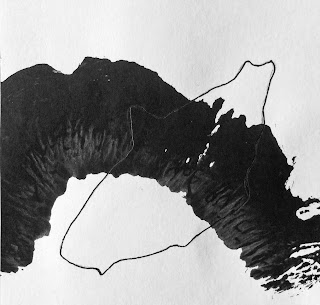 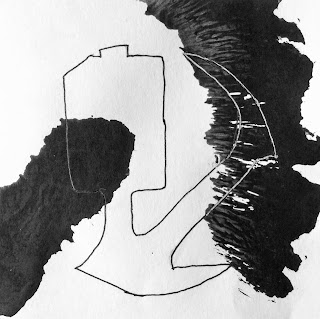 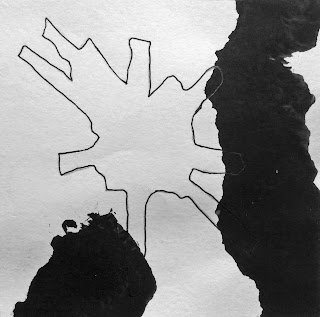 And now to think about stitch (probably fairly minimal) and / or some asemic text ...

Posted by Charlton Stitcher at 15:34 2 comments:

The Green Woodpecker - A welcome visitor

In past summers, we have regularly had Green Woodpeckers visiting our lawn to feed on ants.

It was with great pleasure then that I looked out of my workroom window earlier this week to see this beauty pecking happily at our grass. He (it is a male, I think, as it is just possible to see the signifying red patch in his 'moustache' beside and below his beak in an enlarged version of this photo) walked gently up and down feeding for almost 15 minutes. 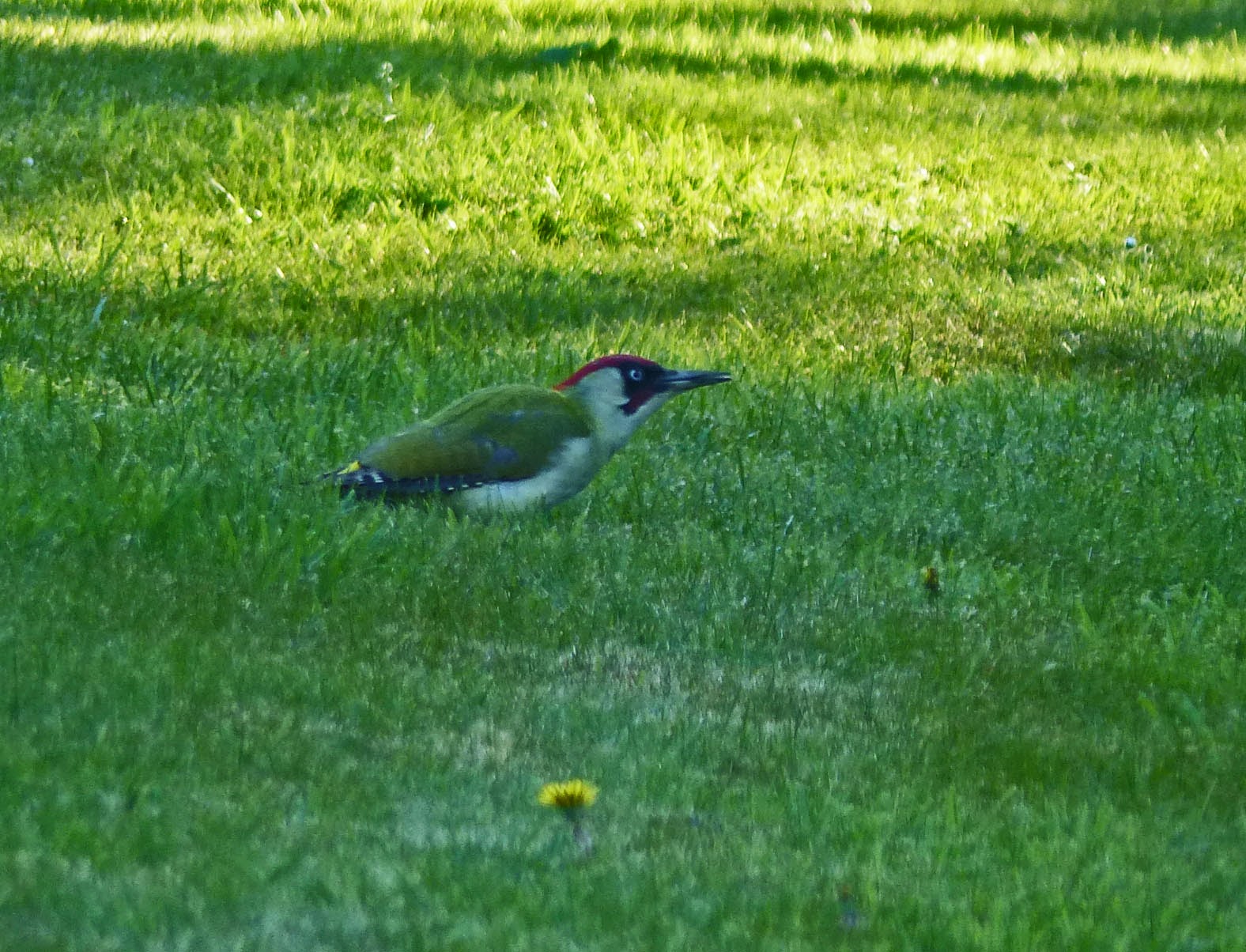 The Green Woodpecker (Picus viridis) is quite a large bird and is relatively common in Southern England. We often hear them calling as if they are laughing in the copse of trees next to our garden. They have long, sticky tongues with which they seek out ants and other insects in tree bark, meadows and, yes, lawns.

One year, in a previous house, we had a family nesting in a conifer in our garden and the adults spent hours investigating our lawn for ants. Later, the young did test flights round the garden flying from tree to tree for 10 days or more - such a joy.

We wait with hope to see what will materialise here this season ...

Posted by Charlton Stitcher at 21:55 4 comments:

I have now been making a mark a day for a month and have a few more results to share, all still using paint or ink.

I spent half and hour or so the other day investigating some of the possible marks to be made (beyond the obvious) with a 2 inch mop brush laden with thick black acrylic paint and also with an old champagne cork. To make the first mark, I swept the brush across the paper with a flick of the wrist. 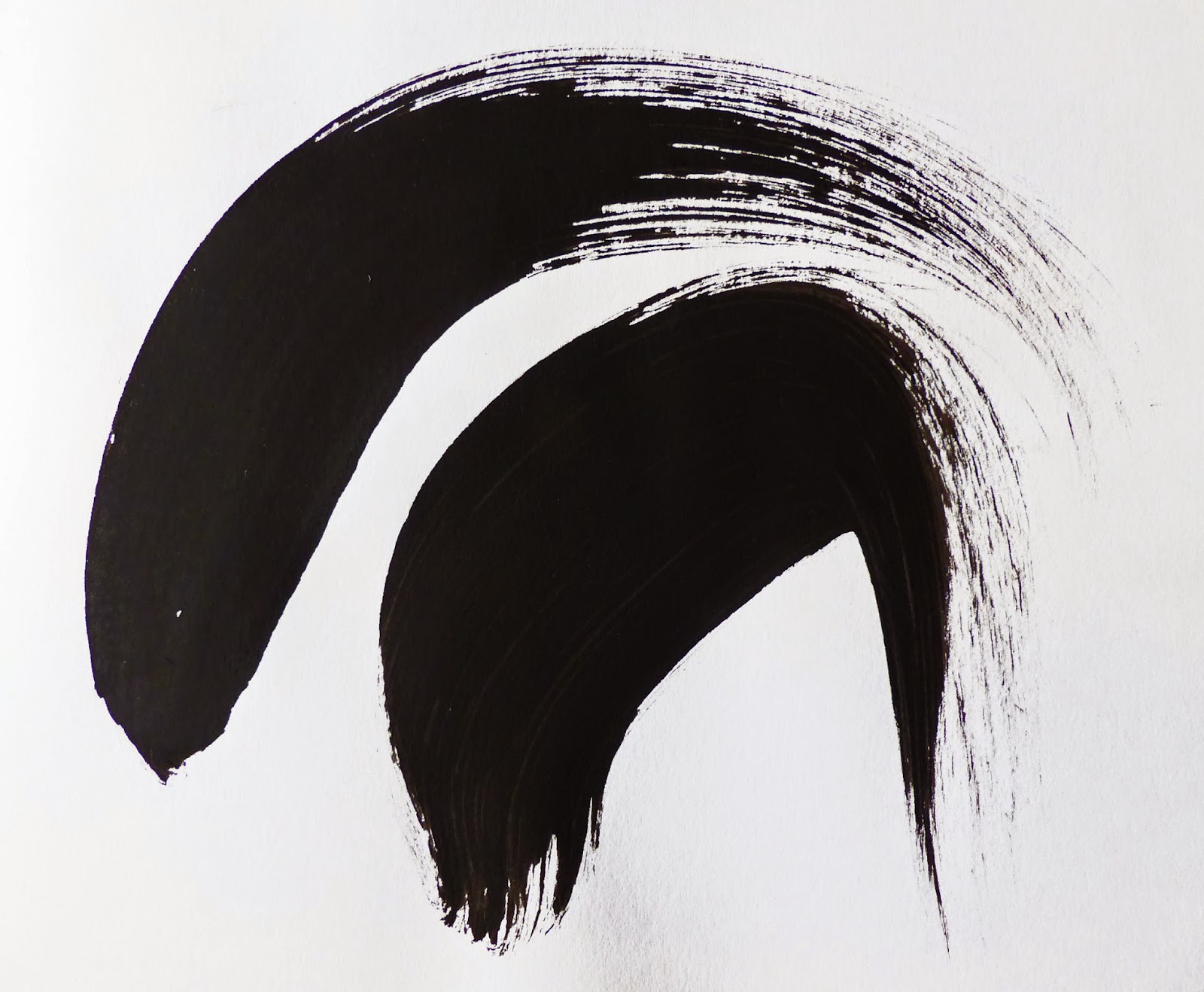 To make the second, I rolled the brush on its side. 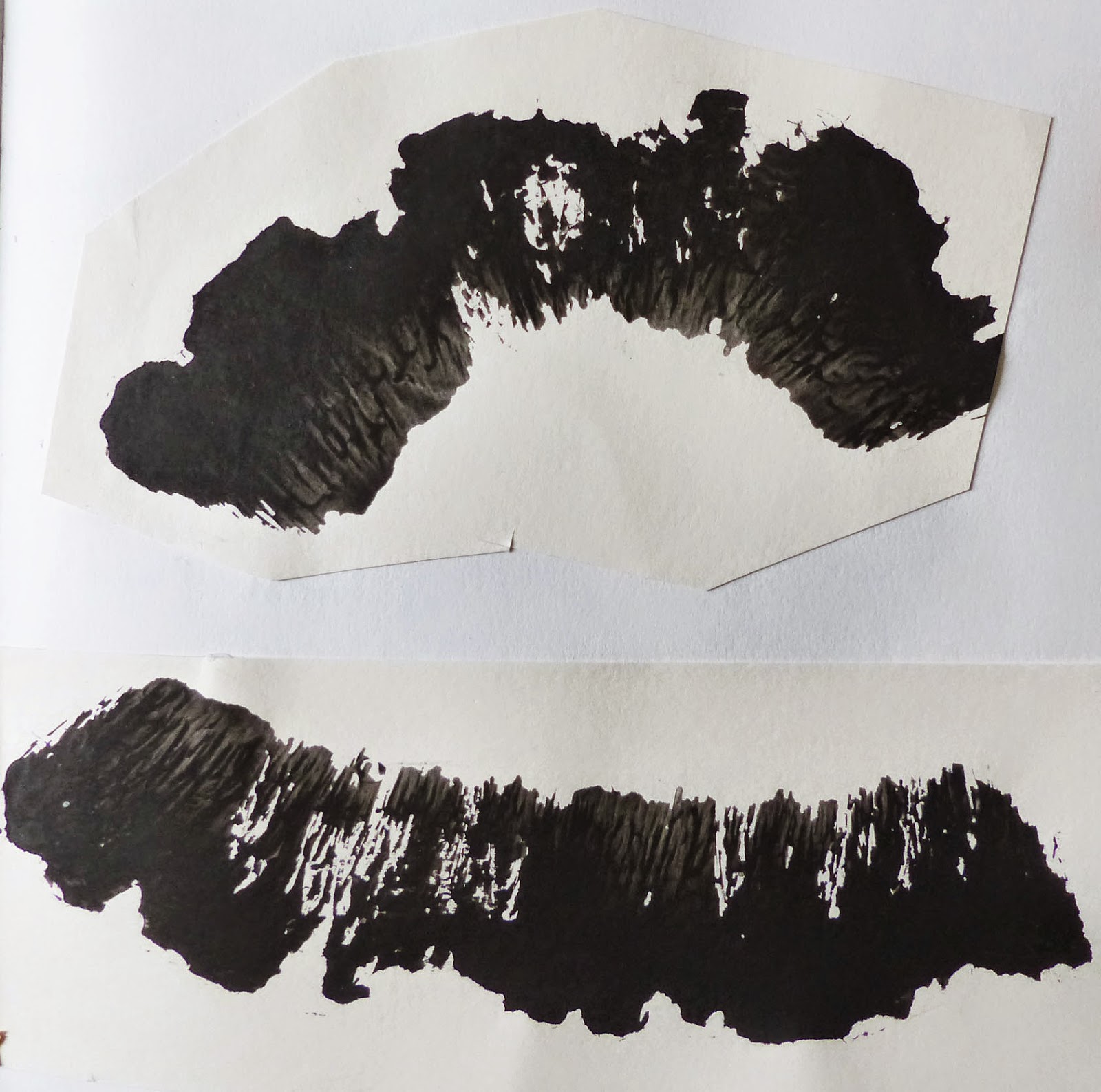 To make the third, I 'stamped' with the brush on its end onto the paper. 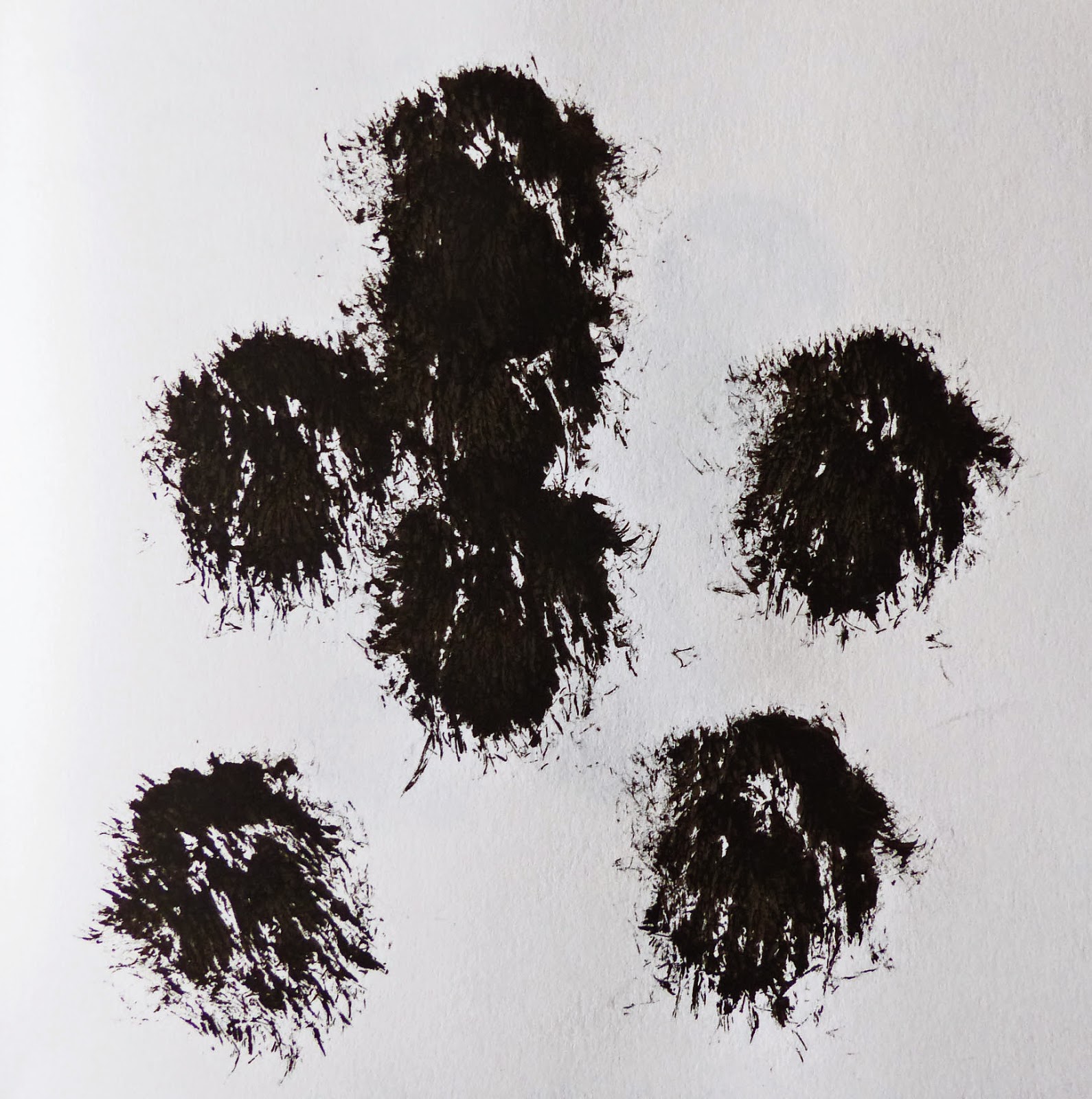 In the last, I printed repeatedly with the end of that champagne cork onto the paper. 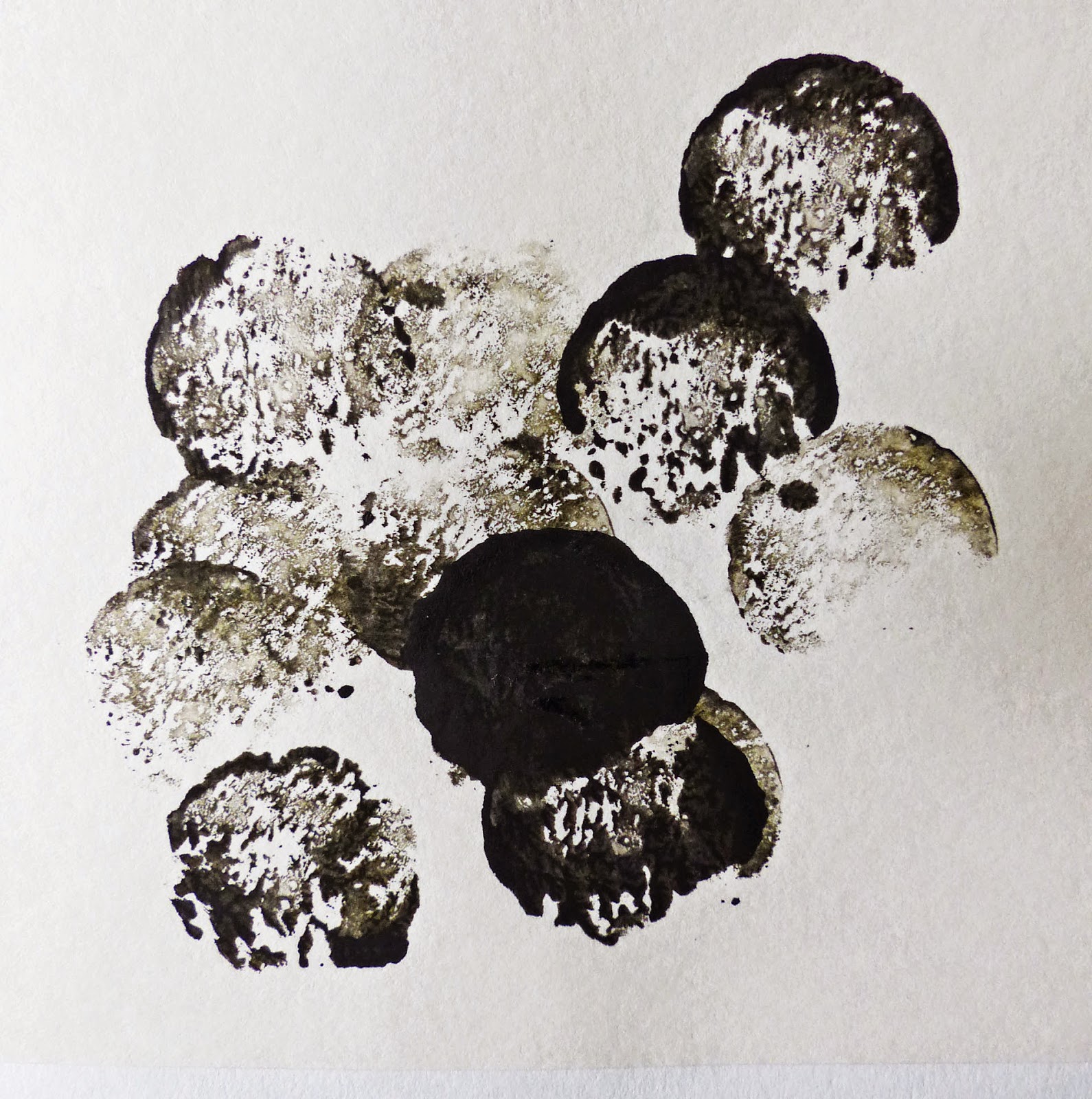 In each case, the marks became more and more interesting as the brush or cork dried out. In particular, I was very surprised by the subtlety of the marks possible with the cork.

And for the future, I intend at least to accomplish another month's worth of marks ... not too big a challenge, I think. In this new month, I'll investigate marks in pencil first of all, at least for the first week or two. I'll post more when I feel my results are worth showing.

It's interesting to me that I've set out several times before to draw every day but have never managed to maintain the challenge for more than a few days. I think this challenge is so effective because of its simplicity and practicality. Perhaps the focus on minutiae is the appeal too. I have only to think up a single tiny idea to try each time and each one takes only a very few minutes (although more if I have the time and want to explore things in more depth). It's very possible to find 5 minutes each day.

Posted by Charlton Stitcher at 18:06 8 comments: