We had a lovely day yesterday at Stourhead in Wiltshire. At this time of year, this National Trust property is wonderful and we had been wanting to visit for a long time.

The sun shone and it was mild and still. The autumn colours round the ornamental lake were stunning. Circling the lake, there was a scattering of sparingly placed red ornamental maples planted with such careful planning that wherever you looked just a single tree could be seen - so clever and  understated. Opportunities for photos were too many to record in full here. I include only a sample of my favourite views.

Along the lake with a rich red maple tree, drawing the eye ... 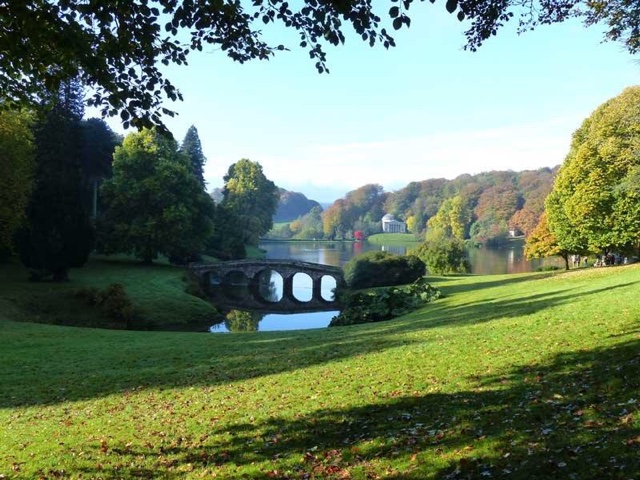 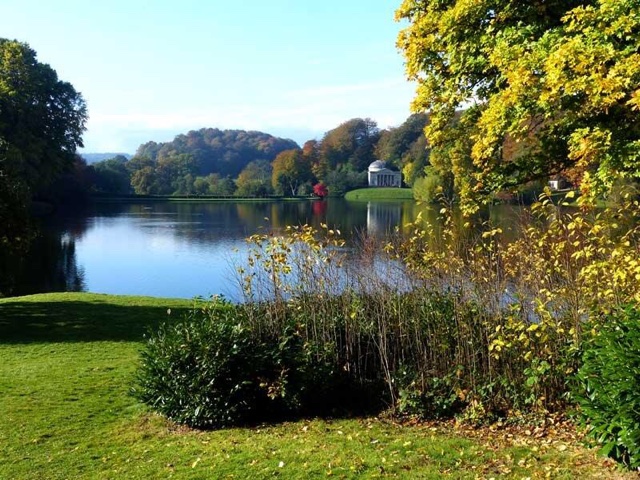 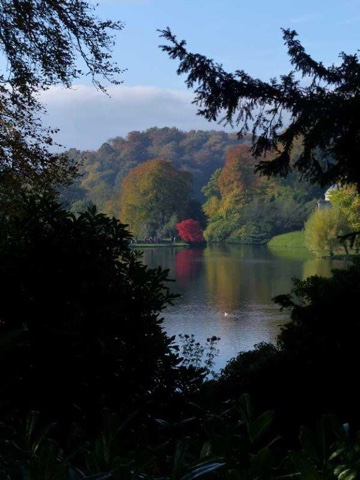 A small lake with orange trees ... 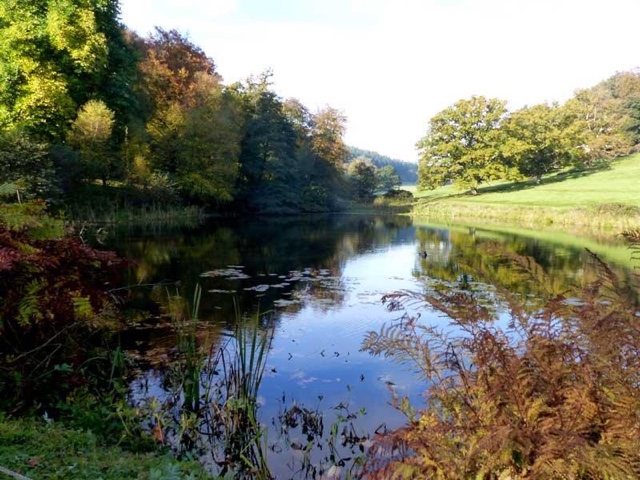 A ventilation shaft in a grotto ... I couldn't resist a hint of architecture ... 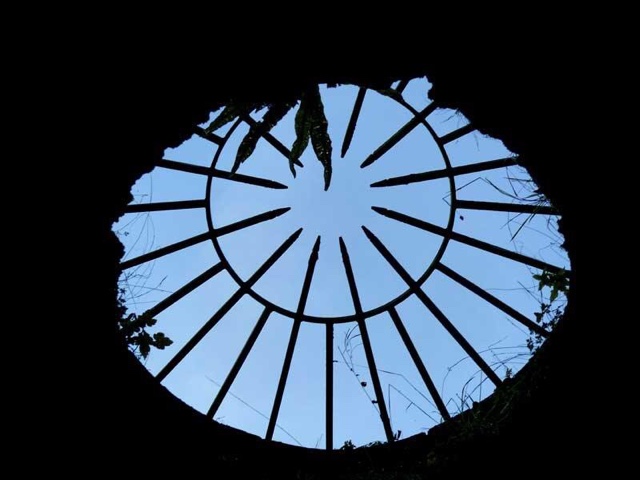 Trees and their shadows and a red maple ... 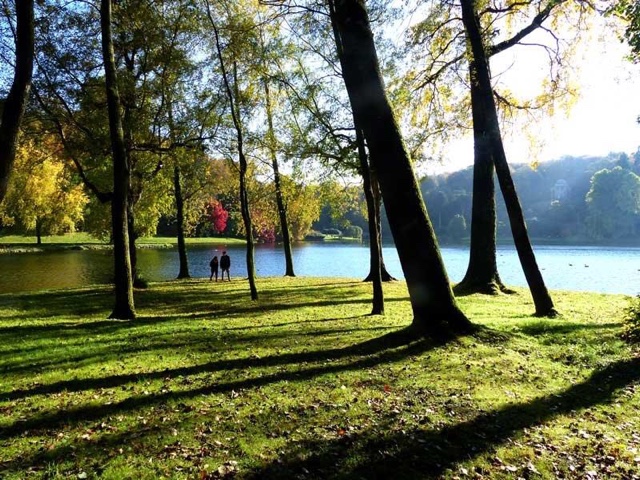 A view back up the lake and another flame red tree ... 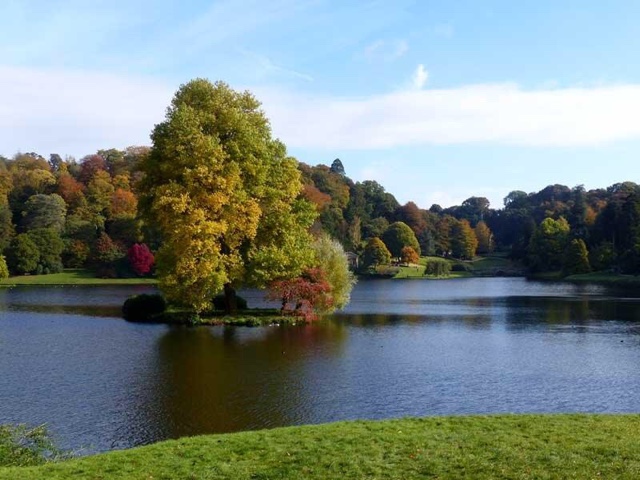 This was indeed a day to treasure with stunning views and time spent in the company of very dear friends.

Today was printmaking day again at the yard: ART space with Sue Brown. More entertainment was had with viscosity inking over the intaglio plates made in the previous three weeks. I had found this great fun when I tried it before (here) and was looking forward to using it again. (For further explanation of what this is all about, see the end of this post).

As I was well aware that my plates had problems (chiefly too little contrast), viscosity inking offered the chance of some relief in the shape of unexpected splashes of bright colour to brighten up the rather muted and uninteresting plates. I was not disappointed. 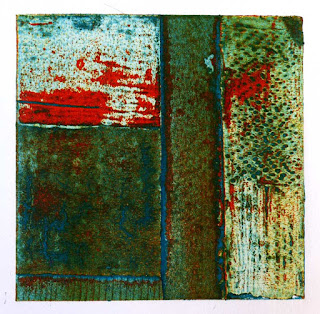 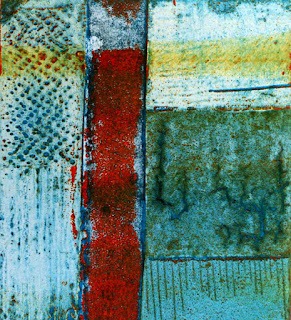 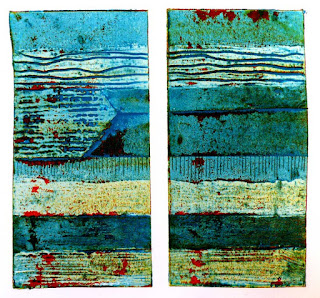 The viscosity inking and the cutting in half of one of the plates (image 3 above) have certainly lifted things and I feel I've achieved something.

I feel also that I'm just beginning to get a tiny glimmer of understanding about what makes an effective plate and how to achieve it and, thanks to Sue's reminders, how to keep my prints clean. We have a week off now for half-term. Then there is the opportunity to design a fresh plate or two using whichever combination of techniques takes our fancy from those we've been shown this term.

I'm looking forward to that. We've been given card for the new plate and have the chance to work on plans for a design or two before the next class. I've even made myself a list of dos and don'ts when making the plate ... so here's hoping for better results at each stage ...

PS For those who, like I was before I did this course, have no idea about viscosity inking, I've added two links that explain things here and here. The first includes a YouTube video and was not quite what we did but it explains the whole process better than the others I found. Our inking process gave much more intense colour differences and was somehow simpler.

The process allows three different colours to be added to a print with a single pass through the press. The first colour is applied (but not printed) in the normal way. The second and third colours use inks of different viscosities (thicknesses). The second is thin and runny, the consistency of cream, and the third is thick. They are applied one after the other over the first layer of ink with rollers and with no cleaning off in between. The plate is then printed.  If you're interested in printing, it's a technique that's definitely worth following up.

Posted by Charlton Stitcher at 17:15 6 comments:

Following a link on Facebook from a friend (FB does have its uses!), I came across these wonderful examples of Aboriginal art currently to be seen at the Hazelhurst Regional Gallery and Art Centre, New South Wales in the Nganampa Kililpil: Our Stars exhibition. 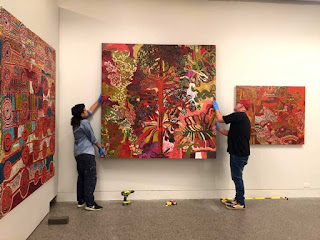 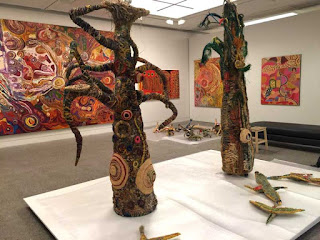 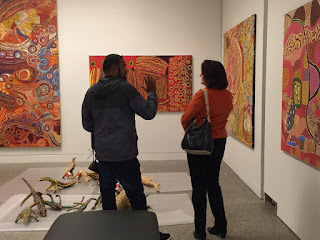 The wonderful vibrancy of colour and movement of these pieces had me captivated. I saw similar in the Sydney Museum of Contemporary Art and various other venues during our visit to Australia a year ago but none surpassed the rich colour and complexity of this work. How I would love to be able to go and see it in person!

My only regret is that I'm unable to credit these wonderful artists properly as I can't find individual attributions for the works anywhere.

Posted by Charlton Stitcher at 11:37 6 comments:

I've begun playing with the idea of 3 D shapes covered with excerpts from my many photos of architectural forms - structures therefore on top of structures. Today's first attempts are basically cubic in form with their faces stitched together with perlé cotton. 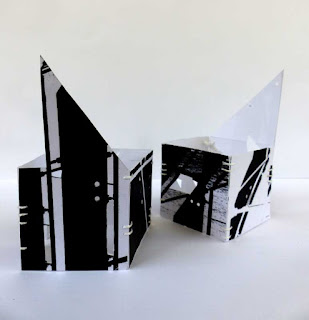 Holes were punched and look throughs were cut to give variety to the surface and glimpses of what lies behind. 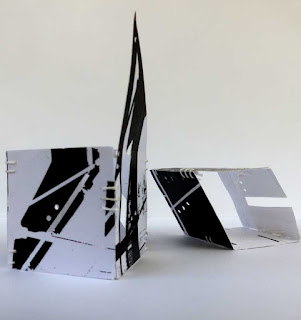 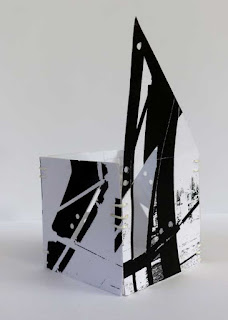 Shadows were created when the forms were strongly lit to give a different perception of structure. 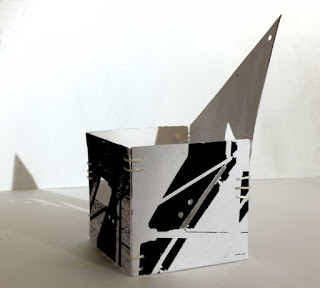 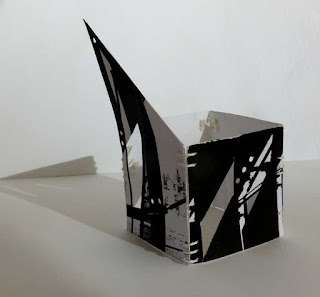 And I photographed one of the forms from above as well as from the side, revealing internal shadows before the light dropped ... and a third layer of structures ... 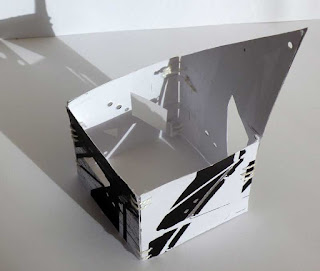 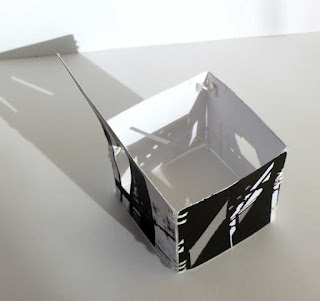 The photos I've used here were taken inside Sydney Opera House looking out at the harbour beyond. I've since turned them to black and white and greatly increased the light levels and contrast to give a silhouette-like effect.

I have a huge library of such photos as I find exploring their possibilities fascinating. I especially enjoy the range of graphic images that are possible with them.

Posted by Charlton Stitcher at 19:25 8 comments:

I am once again taking a course of classes with Sue Brown up at the yard: ARTspace in Cheltenham. It is a pleasure to be back but now, after week 4 of the course I've been having a few thoughts about my work.

We spent today printing up small plates that we'd made over the last two weeks using various techniques - especially applying carborundum and then applying and working into scrim and repair plaster and exterior quality wood glue. The idea was to maximise contrast and to include interesting marks.

Today, as I viewed the prints I'd pulled, I found myself pondering two questions:

1. Why are my prints so often less interesting than the cleaned off plates?

2. And (linked to the first) why is there too little contrast within the prints?

First of all, the print (plus the requested chine collé which seems to add little here) ... 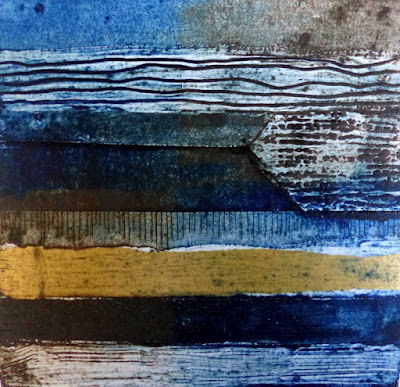 And then, the plate after printing and cleaning off ... 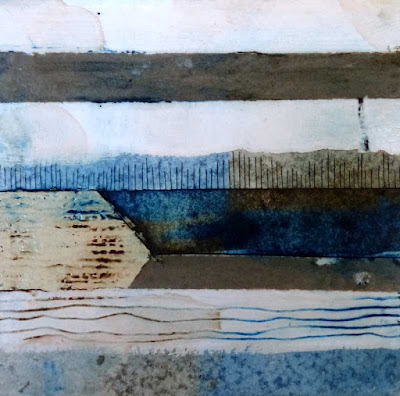 The answer to both interrelated questions I suspect involves the amount of glue applied: too few layers of it on the light parts of the plate (it gives almost white areas within the print when properly applied) and too much glue under the carborundum (which means that the carborundum which is supposed to give really concentrated areas of deep colour is muted as the underlying glue resists the ink and /or cracks).

Posted by Charlton Stitcher at 18:02 4 comments:

Here is a glimpse, tantalising or otherwise, of some of the work I'll be entering into our November exhibition, the poster for which I showed in my last post.

These mainly black and white pieces have the injection this time of some red to give strong contrast and some purple or claret for more subtle variety. It is all a response to our visit to Australia last autumn. 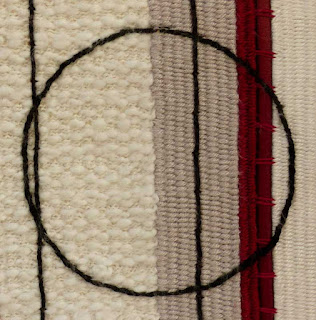 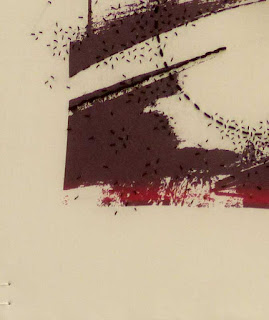 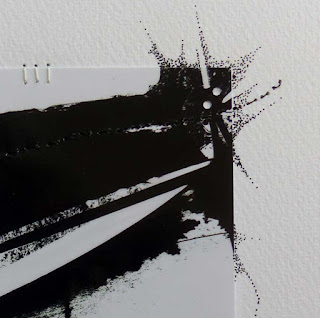 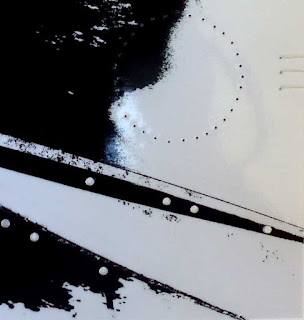 In these pieces, snippets of which you see here, I've explored the relationship between the almost overwhelming impact of the modern development in the cities of Australia and the extraordinarily light touch of the traditional Aboriginal clans who have roamed and lived within these lands for around 50,000 years leaving almost no archaeology or obvious impact at all.

If you are a regular follower of this blog, you will have seen much similar before. It's good to feel I've now pretty much resolved these ideas and completed the work.

It's been a fascinating journey.
Posted by Charlton Stitcher at 16:29 8 comments: 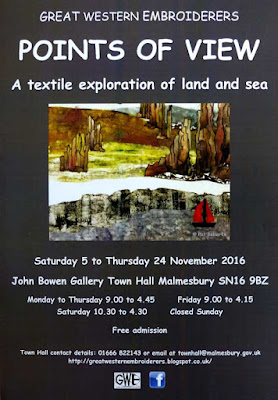 Life has been busy and I have been a poor blogger of late - for which I apologise!

Since I returned from a summer of travelling, there has been no new work that I have felt moved to show and anyway, I've been too occupied finishing off work for this exhibition which opens in the John Bowen Gallery, Malmesbury in November. There have been rather more of those nine tenths finished pieces that took much longer to finish off, mount and frame than I had bargained for.

I have been stitching with Great Western Embroiderers since I retired nine years ago. Membership of the group has given me much pleasure and many opportunities to exhibit my work. I have blogged about our work many times before and this is the latest of those posts.

We are a very varied group and our work reflects this. Some of us are traditional in our approach whereas others like to chip away at expectations and to produce something a little different. The image here on this poster is of a large piece by new member Pat Roberts which was chosen because it seemed to reflect much of what we do.

I hope that some of you who follow my blog regularly will be close enough to come and see what we have all been up to (though I realise from my always surprising statistics that many will not). It would be lovely to see you. I will be hanging the exhibition with friend Ruth Hayman and will then steward from time to time. If I know you are coming, I will try to be in the gallery.

Posted by Charlton Stitcher at 16:32 No comments: