As part of a group investigation with Great Western Embroiderers over the last year, I have explored and interpreted local photographs held in the archive of Swindon Museum and Art Gallery.

The collection privides a record of the town's history since the beginning of photography that has fascinated and absorbed me. I was particularly drawn to two photographs, shown again at the end of this post. I decided to explore what these revealed about the social class and gender differences of the time and about people's daily lives. I worked digitally on both images as I so often do these days but the work from these two photos evolved towards very different outcomes.

The first photograph showed a street of small row houses, dating from the late 1800s with pronounced chimneys (great for angles and perspective) and lines of washing hanging in the front gardens. I generated a series of eight small images. In each, I manipulated the same initial photograph, selecting, cutting and overlaying images and playing with colour and opacity.  I printed the results onto a light weight cotton and stitched with fine running stitches in various ways. 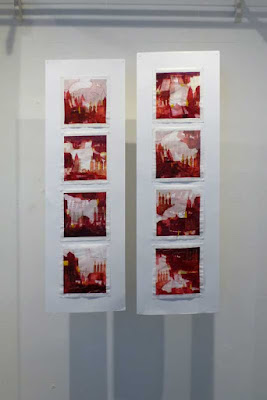 These were then mounted on panels to form the works I entitled Chimneys and Washing Lines. These were hung from a structure made by my husband so that they were suspended away from the wall to reference washing hanging on a line. The gallery lighting produced the shadows I'd hoped for on the wall behind, just as I see when I hang sheets out to dry in the sun.

Details of three of the small pieces are shown here, though sadly the stitching is not as obvious as I would have liked.

Then I stitched a further seven the same size, this time onto organza. Because of the delicate nature of the fabric, the stitching approach I used was very different. I chose to highlight only a very few features from each image and, although I used running stitch again, both the front and the back of the stitch was visible because of the transparency of the fabric. In reference again to the washing lines, I attached each piece with the help of tiny wooden pegs to a length of cord, looped it and it was tacked to the wall. 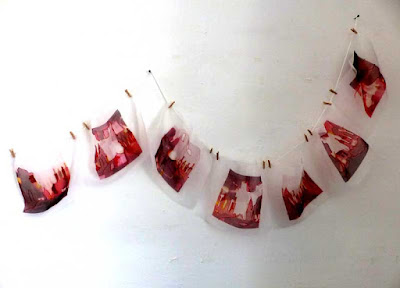 The second photograph which particularly intrigued me was from around 1920 and showed men walking home for lunch from Swindon's Great Western Railway site. It featured a man in a bowler hat as he strode up the hill surrounded by the other workers in cloth caps.  I felt he represented the status and authority of professional men in the 1920s.

Men walking home for lunch was reimagined as Bowler Hats and Cloth Caps, a lightly quilted piece with some top stitching: 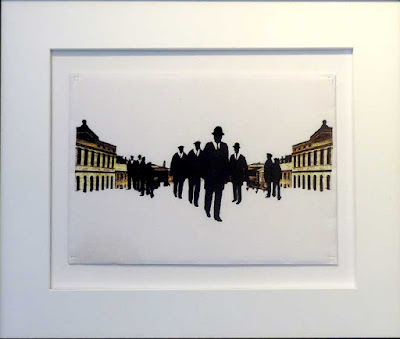 My exploration of class and gender difference then extended to include photos of four streets from the 1920s (here Bridge Street) where I superimposed the figures of men, women and children, cut and pasted from various sources to make a digital photomontage series. 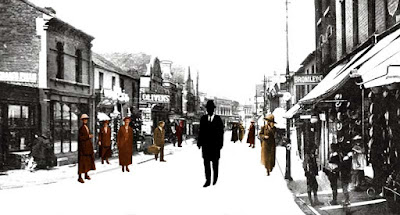 I presented these four pieces as a group and had them framed in the manner of photographs, in a frame, double mounted and behind glass, hence the reflections as they hang in the gallery. 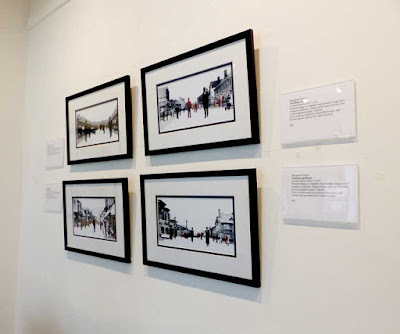 Many recent posts have traced the development of this work. The two particular images that began this exploration were of Railway Village and Dinner Time GWR works, Swindon, photographers sadly unknown though the latter's intitials are given as ETWD. 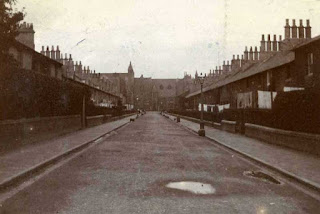 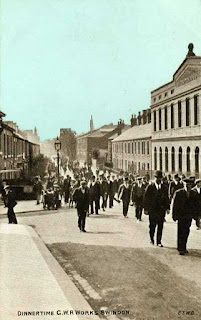 Both photographs were previously shown here, along with street scenes that I eventually used in the four photomontages.

* Full details of this exhibition in the community galleries of Swindon Museum and Art Gallery are given in the side panel of the blog.

In Focus Stitching is open!

My silence has continued rather longer than I intended as I worked under some pressure to produce work for an exhibition by Great Western Embroiderers at Swindon Museum and Art Gallery *. I find I am not good at posting small updates - and anyway the changes I make to my digital images are, to anyone else's eye, very repetitive and don't make for good posting. Also, because of family issues before Christmas, I was working against time and cut out many of my usual more varied explorations.

However, all is now finished and, hopefully, blogging will resume with more commitment!

All the work for the exhibition is on the wall or in cabinets, accompanied by an intersting selection of relevant artefacts from the Museum's collections and a range of the photographs used by members in their work. It will open officially on Tuesday 28 May. 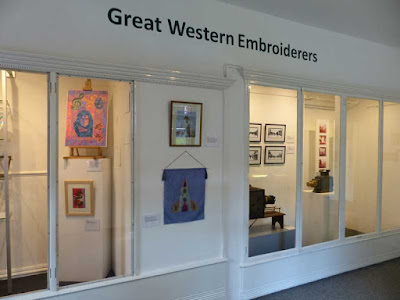 For the last year, we have explored and interpreted the Museum's rich archive of local photographs. These have included examples going back to the very beginnings of photography and all covering the history of the town. Members made personal and very individual responses to the photographs.

I will show both examples of my own work and those that particularly catch my eye from the exhibition in coming days but yesterday the Deputy Mayor came and a Private View was held with coffee and cakes. For members it was the usual occasion with family and friends for enjoying those first views of their long-slaved-over work in its intended setting - always a pleasure and frequently full of surprises.

The Deputy Mayor's arrival and meeting with Maggie Harris, our chair; members discussing work; and Sophie Cummings, the Museum curator explaining the project.

... and talking to visitors.

And finally the required group photograph! For members and friends reading this, I only hope I haven't forgotten anyone. 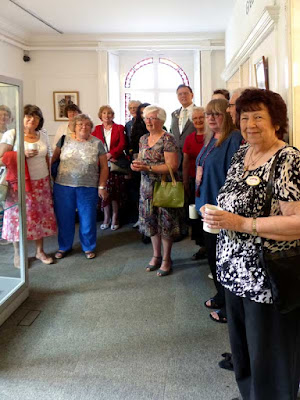 We will be here in the galleries all summer until Saturday 7 September so there is no excuse to miss it if you live locally! Full details are given in the poster in the side bar of this blog.

We are delighted to be exhibiting for so long in this most interesting of local venues which is home to one of the country's most extensive collections of 20th and 21st century British art outside London. So as well as our work in the community galleries downstairs, there is much else to see in the small but beautifully curated changing exhibitions in the main gallery. Sadly though, because of its size, only a small proportion of the Museum's art collection can be seen at any one time because of lack of space, but it is always worth a visit.

* A word of warning, at the time of writing this post, a search of the museum's website is not very profitable as it is currently much reduced and in the middle of a major rebuild. I'm sure it will reappear shortly in a new, informative and revamped state!

Posted by Charlton Stitcher at 18:22 2 comments: