Stitch and shape and not much else?

These little cards have been prepared for Swindon Open Studios next weekend, 22nd and 23rd September. As I posted here previously, I will have work on show and for sale with Great Western Embroiderers in Cricklade United Church Hall and will be manning my table both days, ready to talk about what I do. It will be a pleasure to see you if you live close enough to come.

They feature tiny abstract pieces (around 3 inches square) and are a different approach for me since they are simply impromptu experiments in stitch and cloth. There has been no preliminary photographing, planning through sketchbook work or forethought of any kind - and there is no conscious underlying imagery at play. I just went to my fabric stash, chose a small selection that appealed to me and selected threads in an appropriate palette.

Thus the pressure was off and I played. My main thoughts, I suppose, were with stitch (as both construction and decoration) and with shape, although there was some conscious use of texture and pattern. I also explored diagonals and intersections and the careful posititioning of stitch.

The whole thing has been a very entertaining break for me, though it was surprisingly taxing to do with every decision to be made on the spot. Stitch in my abstract pieces is mainly for construction and in my more representational pieces is generally for decoration and the development of imagery. It is rarely both in the one piece ... something to take forward, perhaps?

Another thought (not a new one for me) was that more is often too much and simpler is better. I always have to remember that.

So, nothing is ever done completely in isolation, whatever one may think!


*Full details of Swindon Open Studios and the other contributors is to be found on their website here.

Posted by Charlton Stitcher at 22:16 6 comments:

I have recently been accepted by Brunel Broderers, a small group of textile artists and embroiderers who (currently) come from Gloucestershire, Wiltshire and Bristol.

The work of the group is very varied and there is much experimentation with members frequently pushing at the boundaries of what is usually considered to be embroidery. For the first time in a while, I feel excited at the textile challenges ahead.

I joined them recently for a small exhibition of  work at the West Country Quilt and Textiles Show at the University of the West of England, north of Bristol. Each member chose a few pieces of recent work that they wanted to display and we stewarded for the four days of the show. 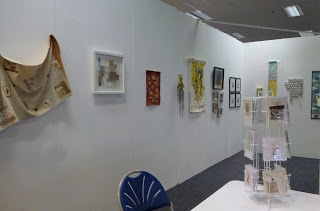 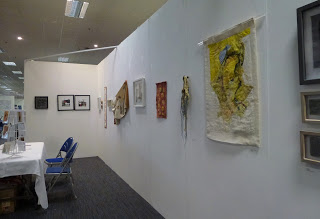 Posted by Charlton Stitcher at 19:34 8 comments:

I will be taking part in Swindon Open Studios with Great Western Embroiderers this year.

My work will include much that I've posted here before plus cards and some small pieces such as  these, on photographs manipulated in Photoshop Elements, printed onto cotton and hand stitched  ...


and others similar, several of which are still to be finished! 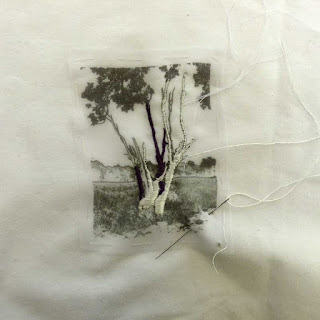 We will be in Cricklade on Saturday 22 and Sunday 23 September. Details (including opening times and address) are given in the poster in the side bar, right.

I will be manning my table throughout the two days, along with 6 other members of our group. For those living close enough, it would be a pleasure to see you.

Posted by Charlton Stitcher at 15:52 2 comments:

Recently, I met a friend in London for a visit Tate Britain to see their current Aftermath exhibition. This traced the developments in art in the wake of World War 1 and evoked powerfully the horrors of life in the trenches and the lasting effects of the conflict after it had ceased. It was a most challenging and thought-provoking day. There were so many heartrending images of suffering to view and many will stick long in the memory.

Unfortunately, however, my choice of images has been limited as photographs were not permitted. I've relied therefore on those shown here on the Tate Britain website.

The first painting below was by French artist Paul Jouve and was to be seen towards the start of the exhibition. An abandoned helmet became a poignant symbol of suffering and destruction for many artists caught up in the conflict. Here the sense of pointlessness is highlighted by the cherry blossom on the tree in the background - a poignant link to the normality of the past. In a similar vein was a painting by Sir William Orpen. Standing in front of both these paintings, the desolation and sense of loss were palpable. In both, the heartless destruction of everything was highlighted by the apparently sunny colour palette.  They each evoked strongly the silence and absence of all life once the fighting stopped. 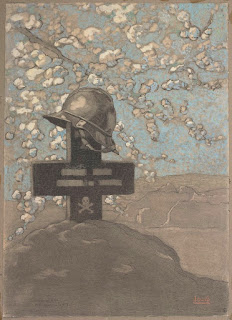 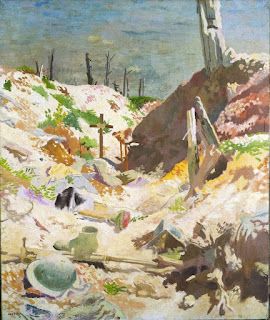 I found another by Sir William Orpen in my searches after I returned home. It seemed to evoke especially strongly the utter devastation and futility and the undervaluing of life in the wake of the battles. 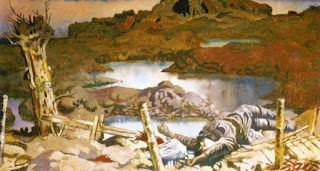 There followed powerful evocations of both the terrible wounds incurred by many survivors of the trenches and the effects of the conflict on the women and children left at home where homes and lives were destroyed. 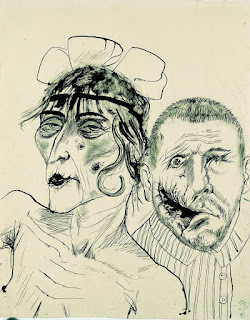 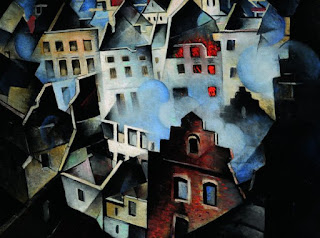 After the war, many artists returned to prewar classicism (among them surprisingly to me was Picasso), seeking the comfort of the known. Yet others reflected on the utter pointlessness of the conquest. They called into question every aspect of society, seeking to destabilise conventional gender roles and social order. Out of this questioning arose Dadaism and Surrealism, represented in the exhibition by the work of Hannah Hoch and Max Ernst among others. 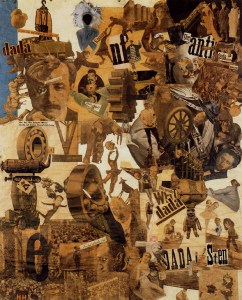 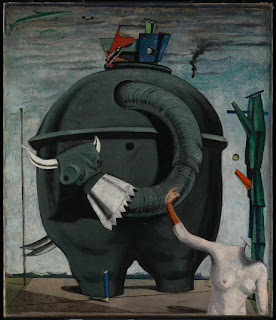 A simple piece of sculpture by Wilhelm Lehmbruck made a particular impression on me. 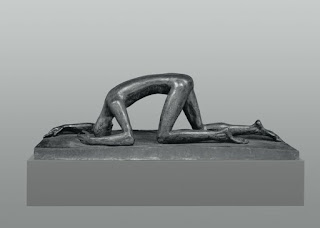 Lehmbruck was a German sculptor. This displayed so graphically that the horror and sense of pointlessness were felt equally keenly on both sides of the conflict.

The exhibition is on until 24 september. I highly recommend it, though it was a gruelling ride. We had booked our visit as part of a package which included lunch in the Rex Whistler restaurant. This provided an excellent meal and some much-needed light relief to the challenges of the exhibition.

I suspect that this is a formula we will repeat, though perhaps next time we will find more cheerful subject matter.

Posted by Charlton Stitcher at 17:06 2 comments: