I'm still playing with thoughts of ways to stitch those tree photographs and here is the latest batch of trials ... some with a future and some not, I think ... but I guess you never know what may prove useful.

First of all, satin stitch with a difference - stitching up the printed branch shapes, 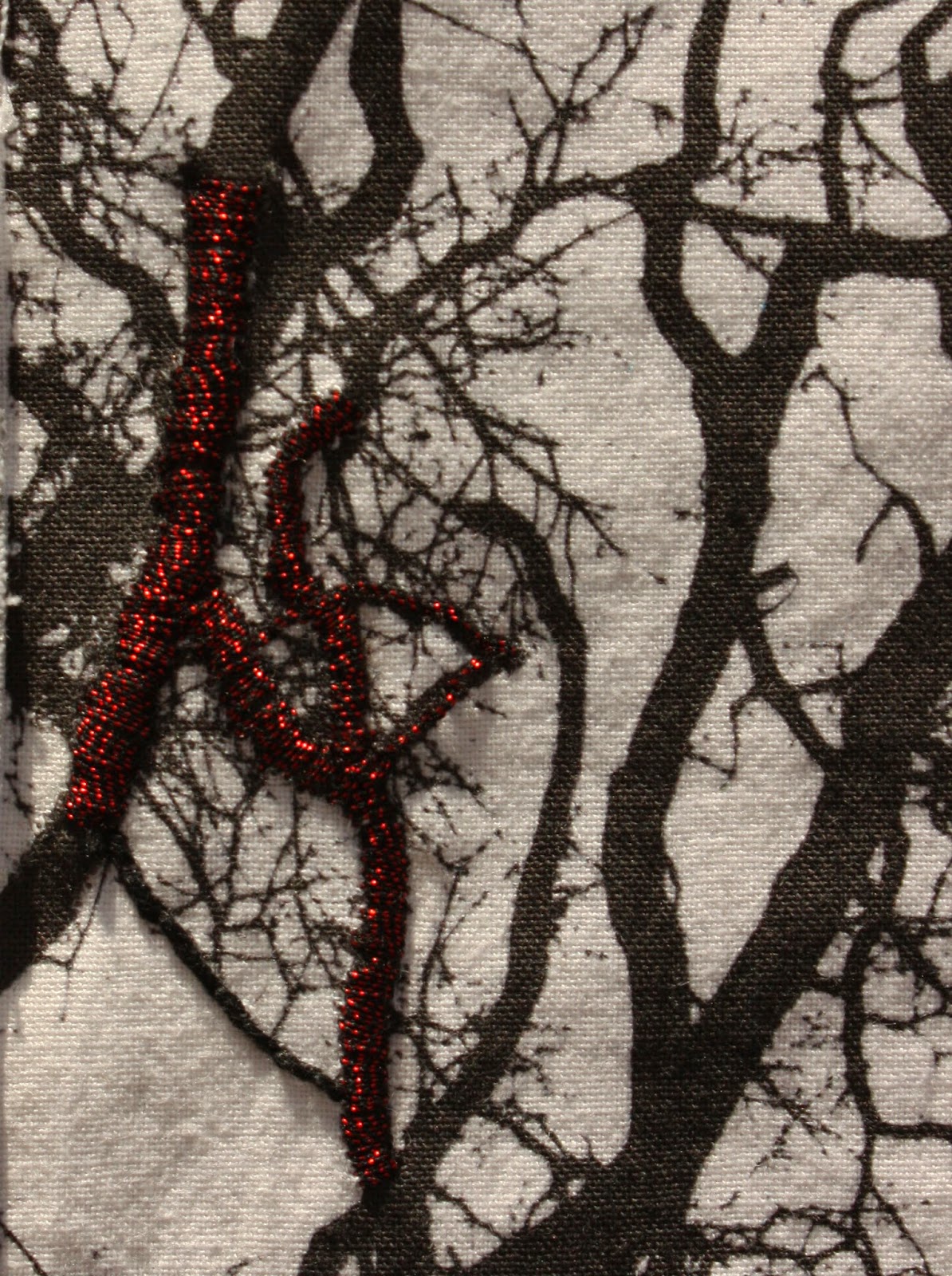 and in the unprinted spaces between the branches. I quite like the contrast on them both between the solid stitching and the fine lines of the twigs ... 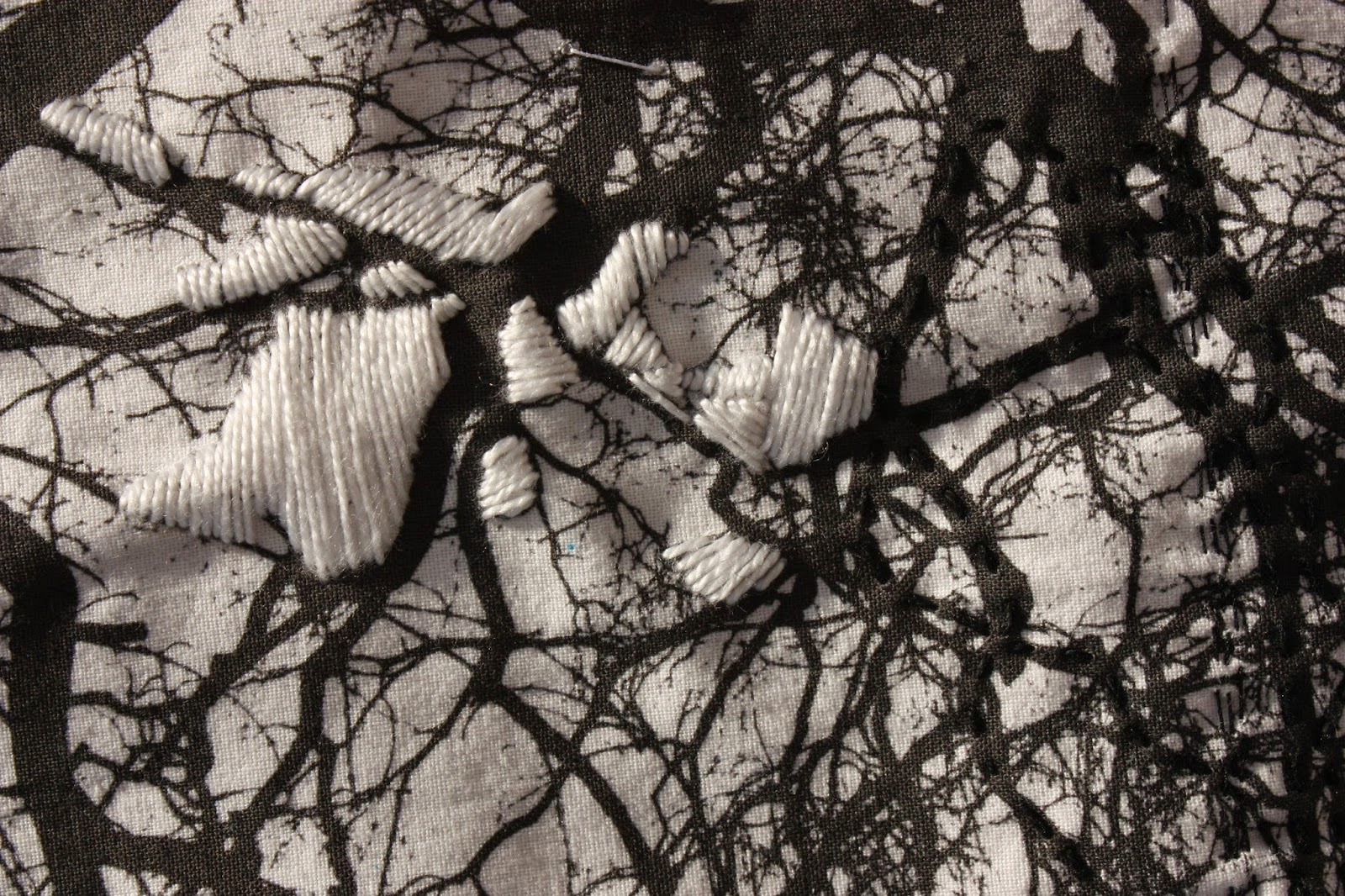 Then exaggerated straight stab stitch across and linking the branches, 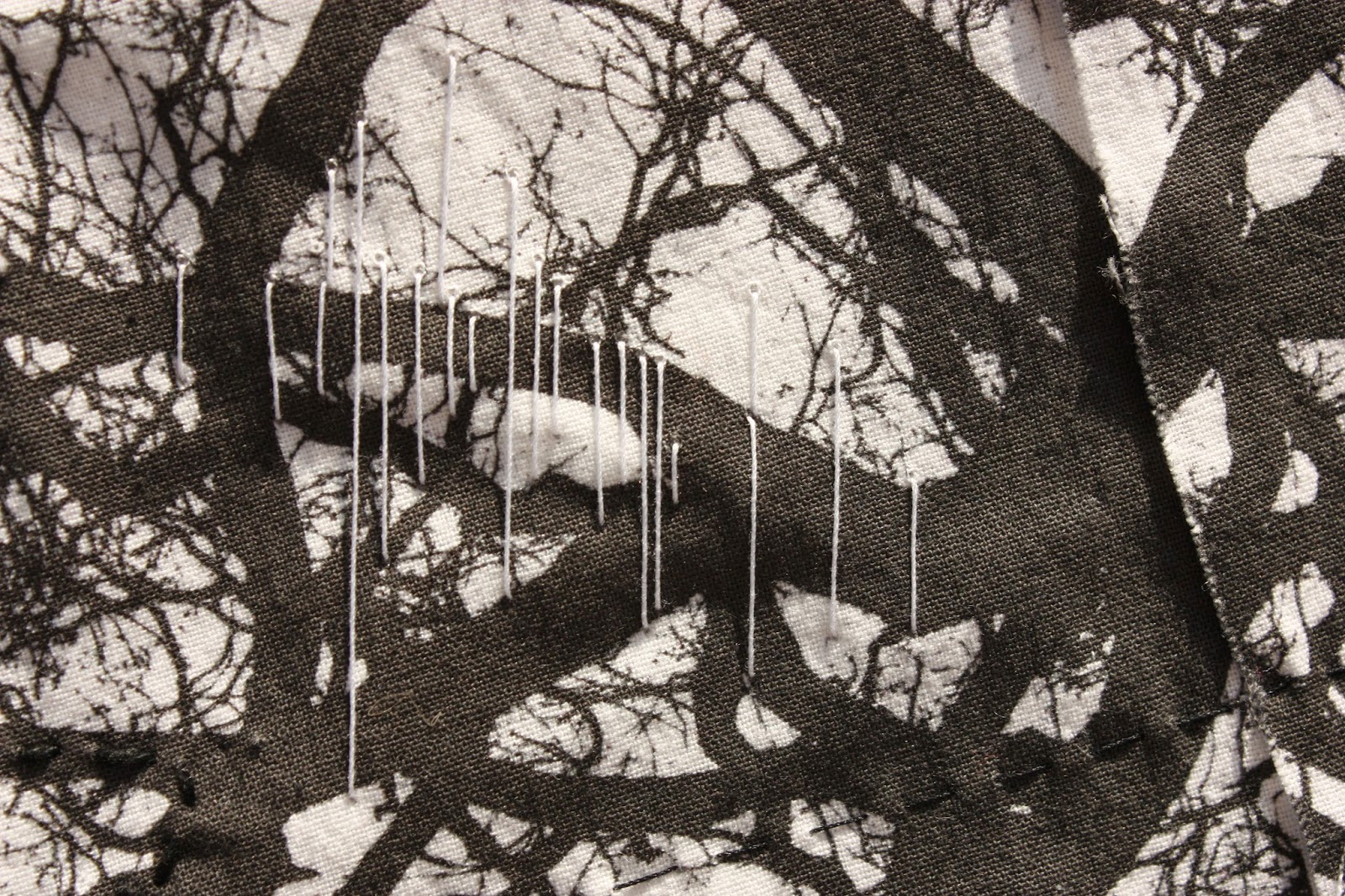 and close running stitch in rows (to me the least successful) 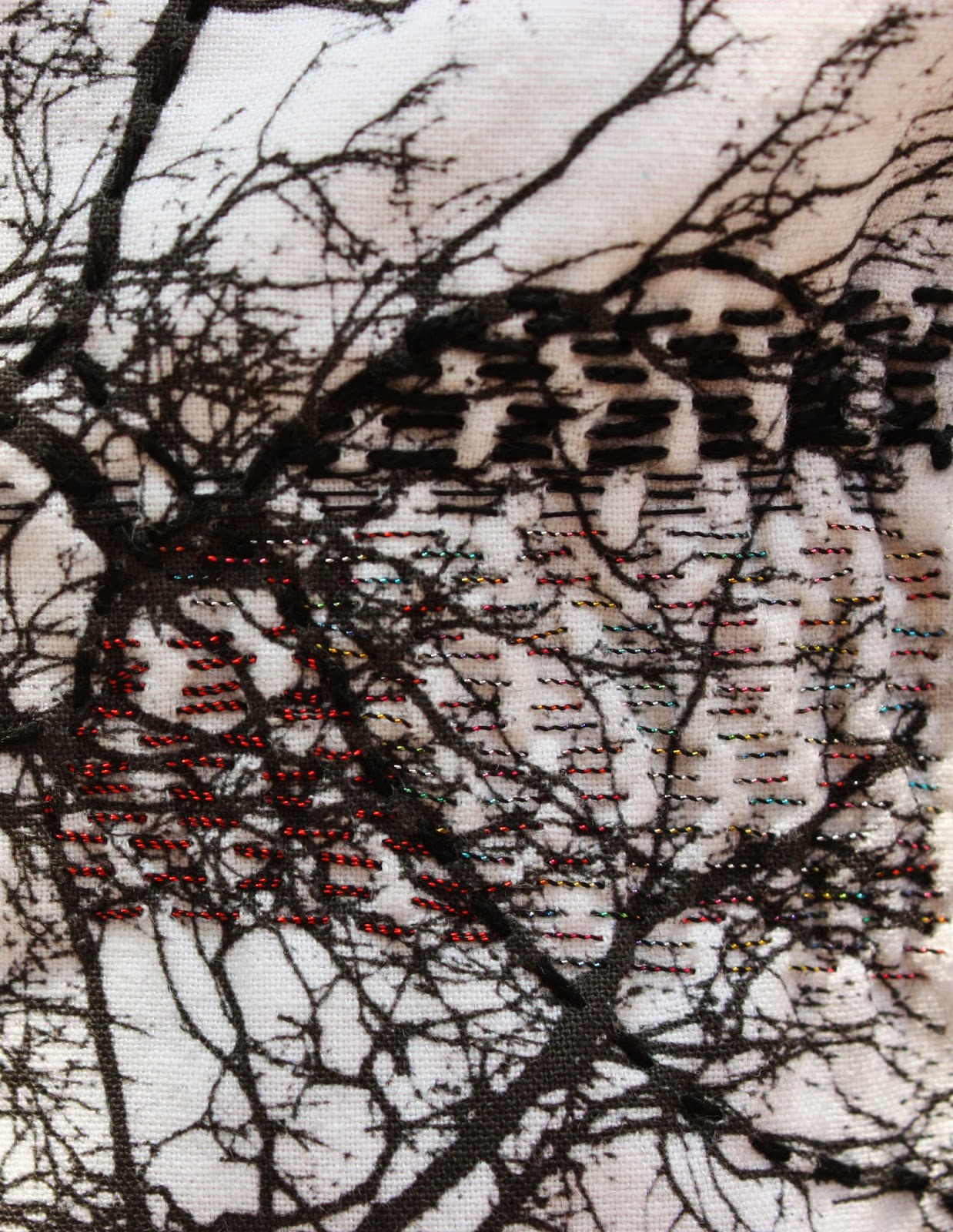 I think now it's time to start stitching something more coherent. A long car journey on Friday may give me the chance to start ...

I am a member of Malmesbury Embroiderers' Guild. We currently have an exhibition at the John Bowen Gallery in Malmesbury Town Hall with the title Poetry in Stitch. The exhibition opened yesterday and lasts until 11 July. 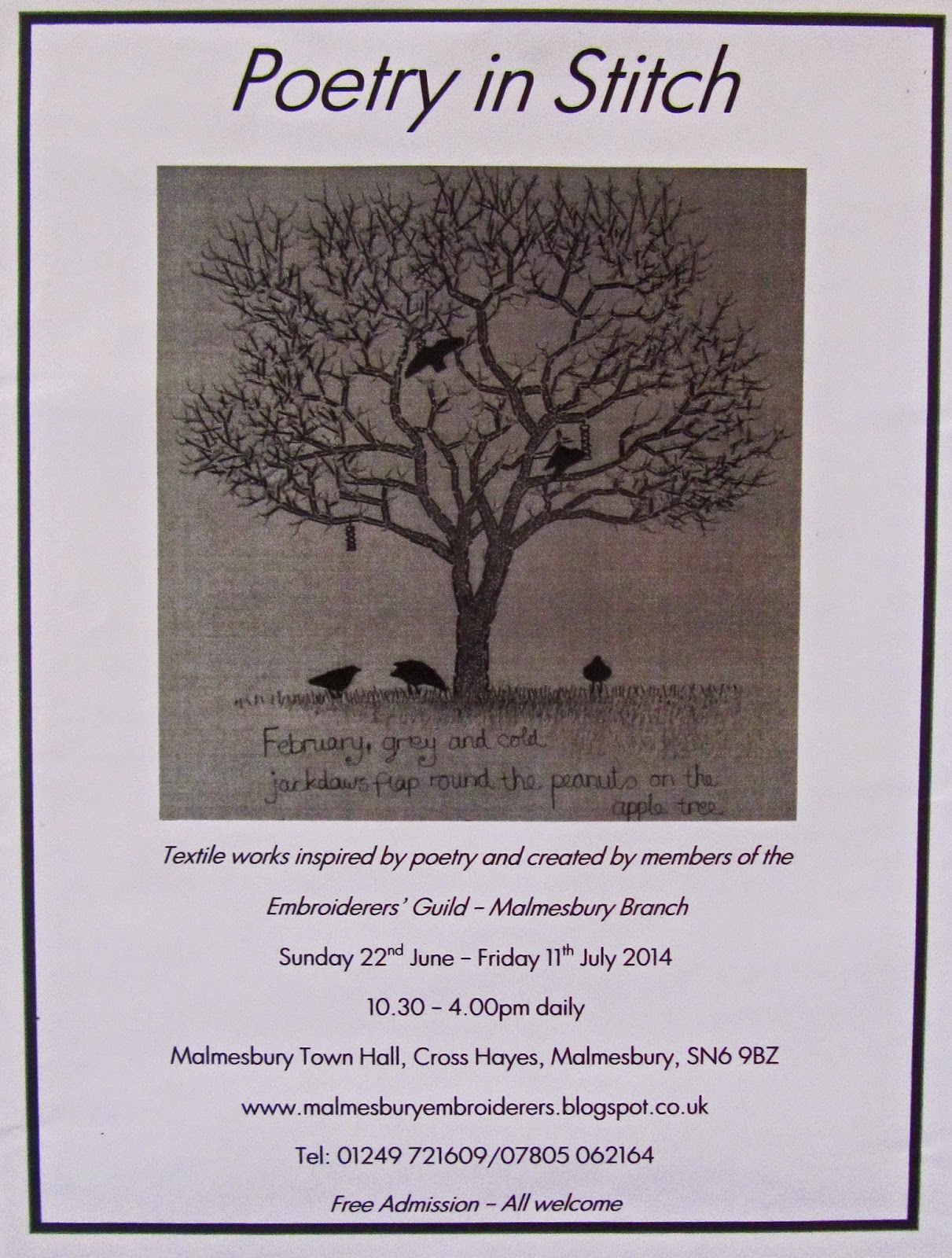 The group are a talented bunch and, as always, the responses are many and various. However, as the title suggests, all the artists and makers have taken their inspiration from poetry and, in many pieces, words play a significant part in the overall design of the work on show.

As well as hand and machine stitch, there are examples of tapestry weaving, small 3D work, appliqué, quilting, fusing, and the use of photography to provide imagery in the work.

Anyone living close enough to visit will be most welcome. Members of the group will be present in the gallery stewarding at the weekends and there will be members stitching and happy to talk to visitors at other times on an informal basis.

Posted by Charlton Stitcher at 12:34 4 comments:

This is without doubt the trickiest colour in the Roy G Biv spectrum. As usual, I'm struggling to work out what colour I'm seeking, and having decided what to look for, to find things to photograph that seem to be somewhere near the right colour.

These are my attempts in that rich, purplish blue that I see as indigo, mostly from my photo archives ...

Carriage access through a C16th building in Suffolk, UK, 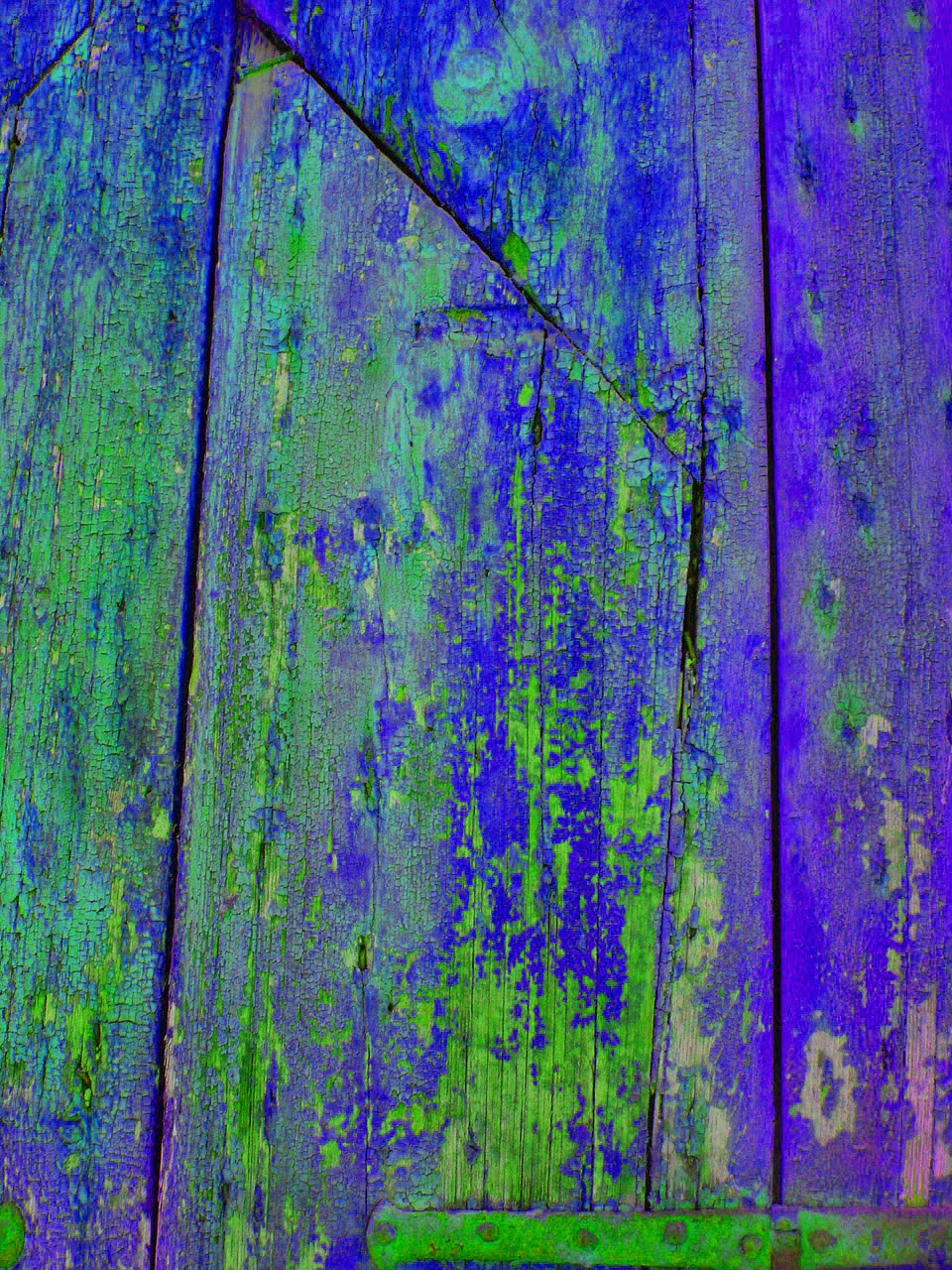 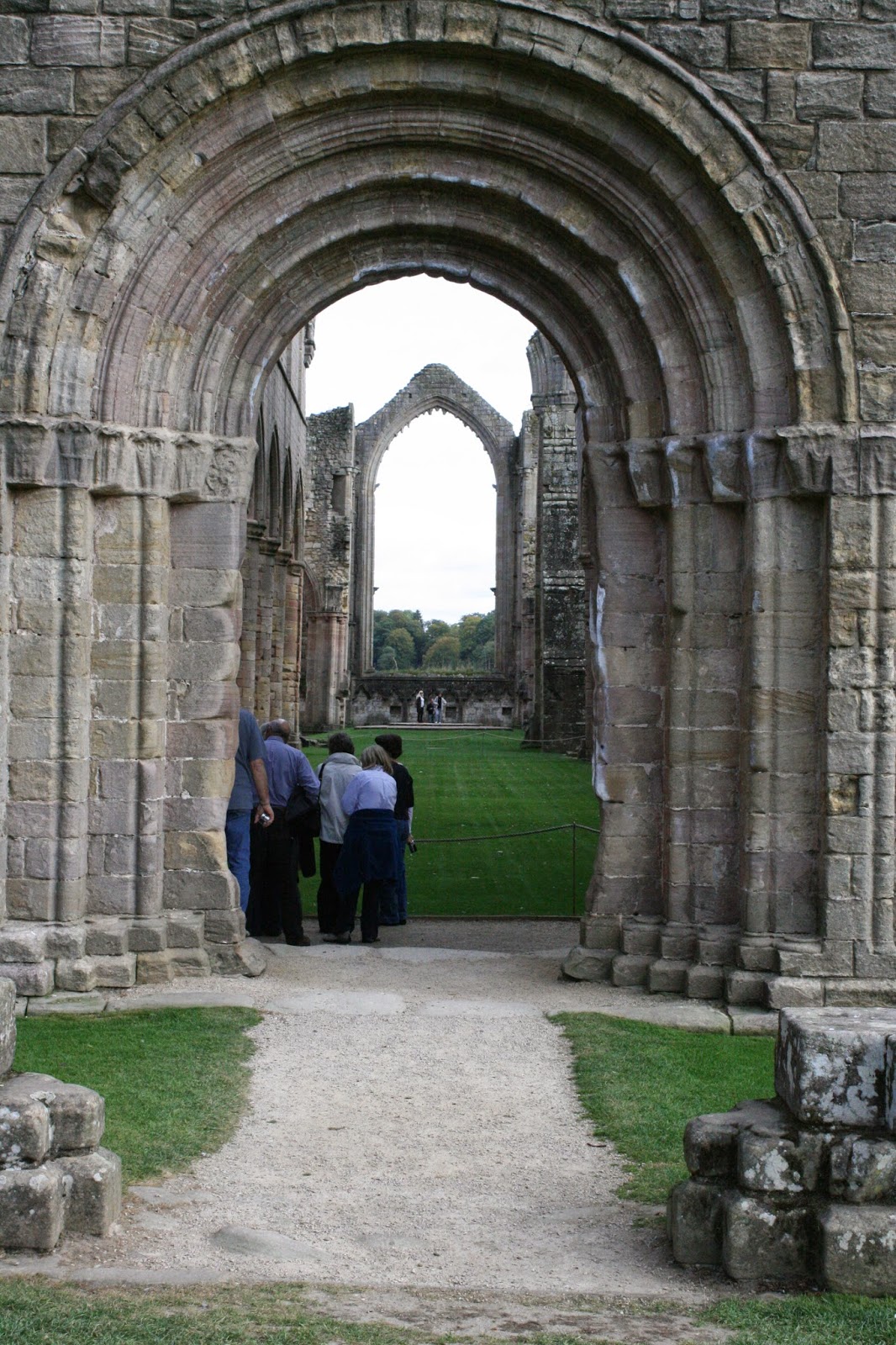 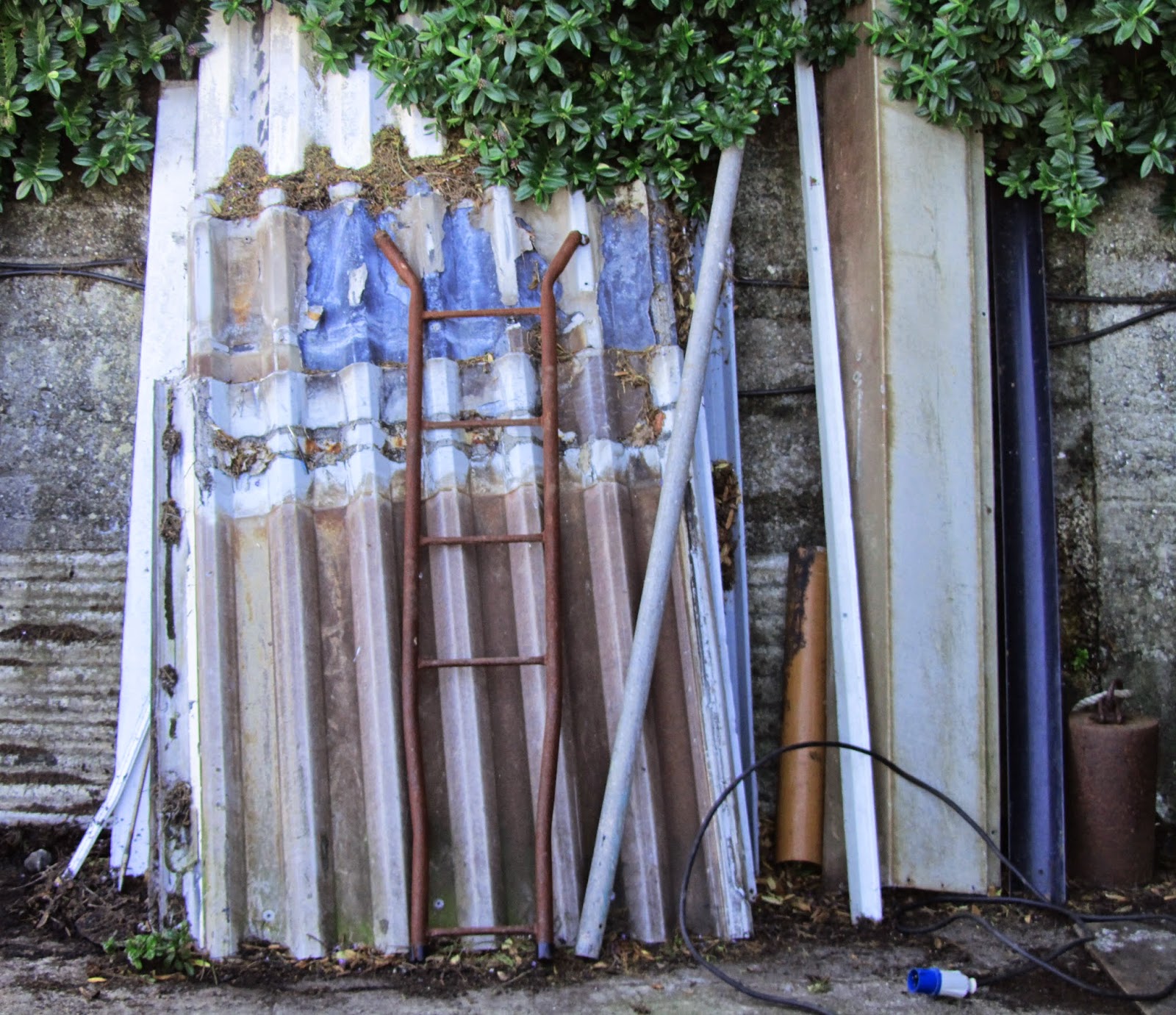 a stack of corrugated iron roofing and other metal in a boatyard in Abersoch, North Wales 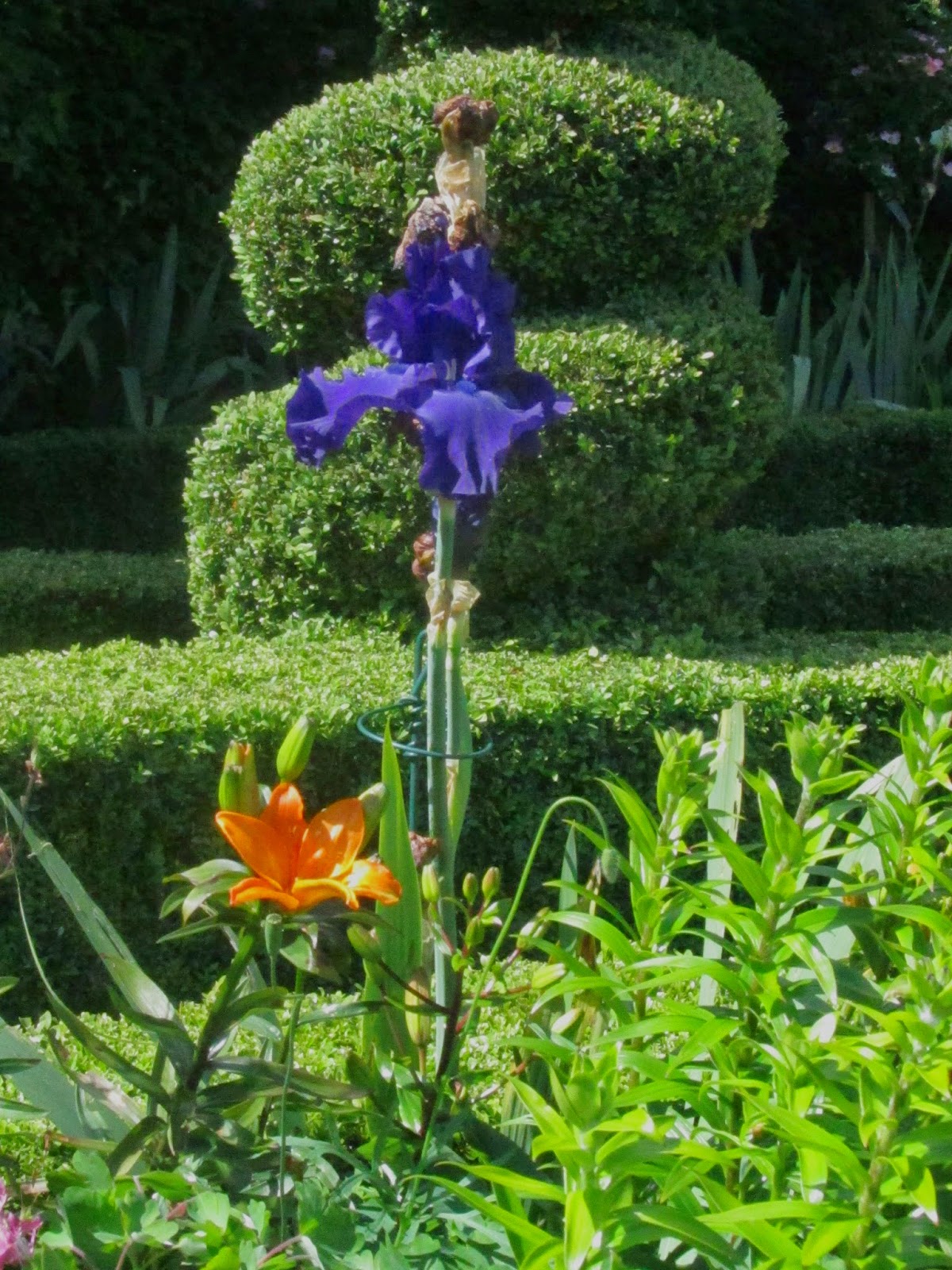 and last of all, a deep blue iris in the gardens of Malmesbury Abbey, near where I live.


Julie B Booth has wonderful indigos on her blog, together with links to other participants.

This weekend while staying in Cheshire, we visited the National Trust property, Dunham Massey, near Altringham. During the last two years of the First World War, this impressive house and its grounds became the Stamford Military Hospital which provided care and treatment for 282 soldiers sent home from the front following often horrific injury.

To commemorate the hundredth anniversary of the outbreak of the war in 1914 a special display Sanctuary from the Trenches had been set up in rooms of the house. I found this deeply moving. There was a graphic but simple introduction which described the horrors experienced by the soldiers in the trenches - the mud, the cold, the infestation by rats and lice, and of course the imminent danger of injury and death that haunted every man day and night.

In one room of the house, a ward had been set up as it would have been in 1917. There were quotes from injured soldiers as well as nurses and doctors printed onto the pillows of the beds or onto the wooden furniture beside them. I found the simplicity of this presentation particularly vivid and powerful.

The quotes were taken from various sources, including some from Forgotten Voices of the Great War. This is a compelling record put together by the Imperial War Museum and edited by Max Arthur. It records the events of the war in the words of those who experienced it and has become the most important archive of its kind in the world.

In the gardens surrounding the house, we found two simple but beautiful sculptures erected to commemorate the soldiers who found refuge in Stamford Military Hospital. The first we came across was a simple structure consisting of 282 individually cast concrete cubes, one for each soldier, and stamped with his admission number. 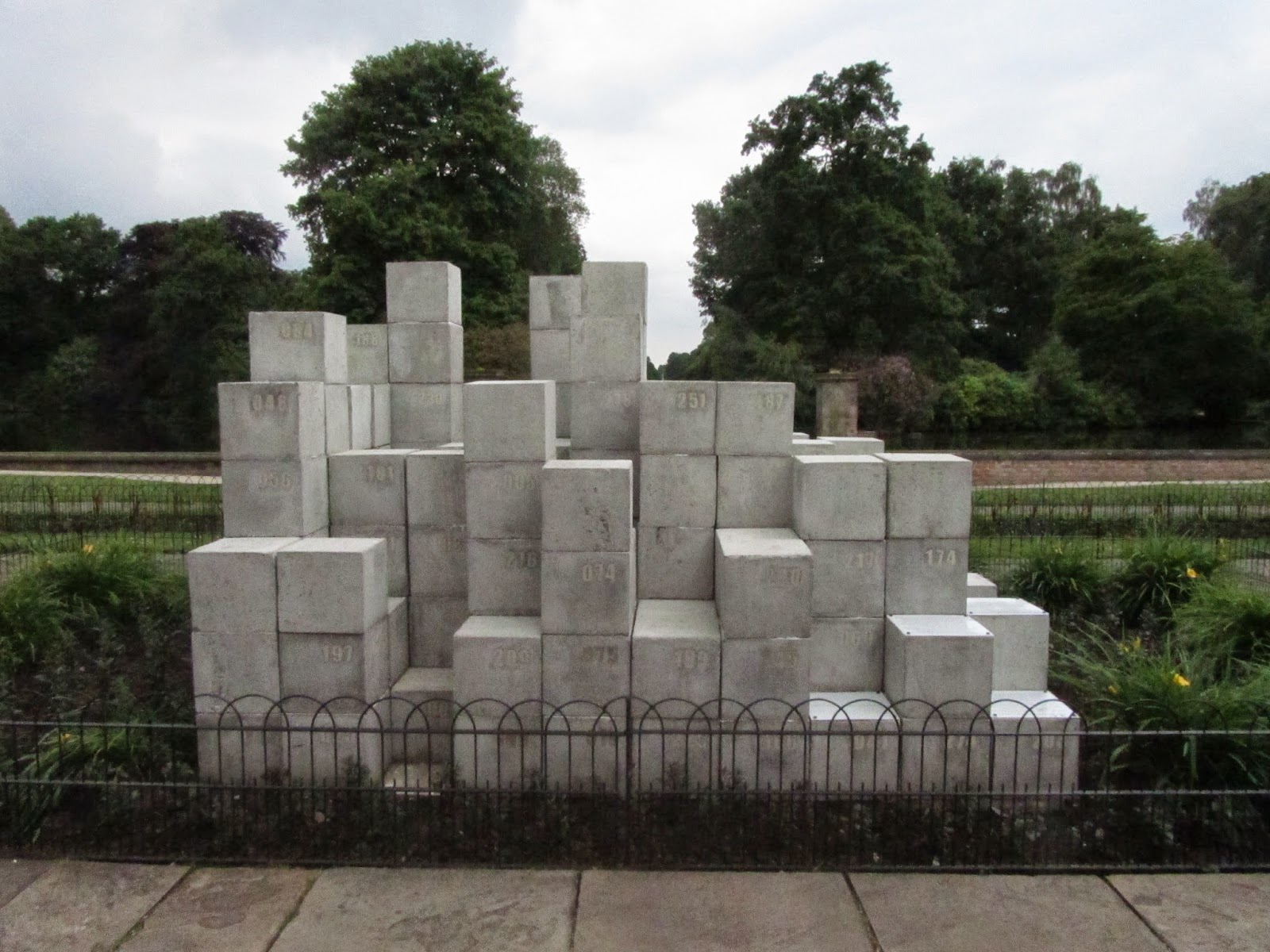 Further on, on top of a small hill overlooking the lake, was a wooden construction printed with poetry written by the soldiers who were treated at the hospital. The poems were written in autograph books belonging to two members of the Dunham family, Lady Stamford and Lady Jane Grey. 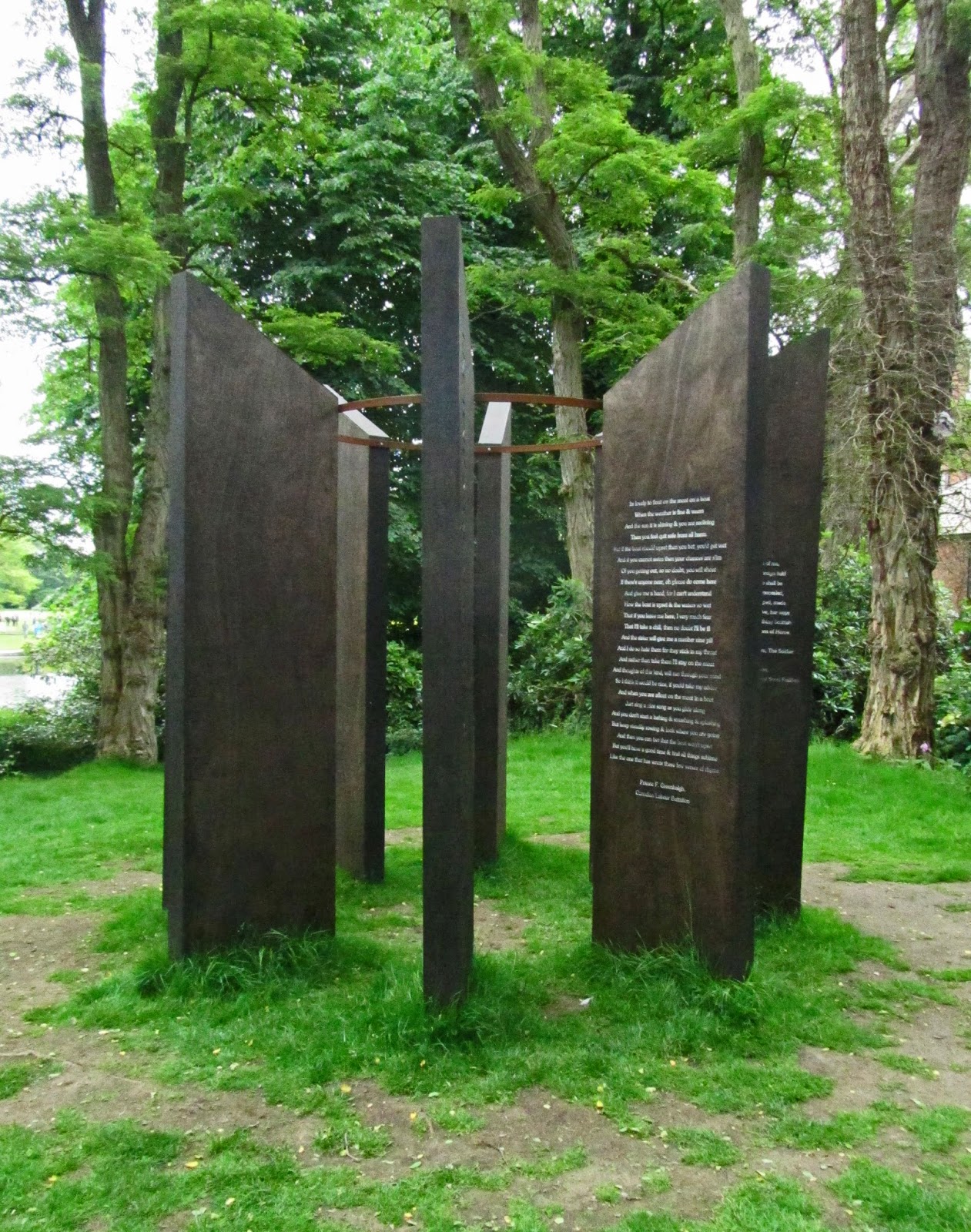 Despite everything he'd suffered, one soldier wrote these gentle and optimistic words ... 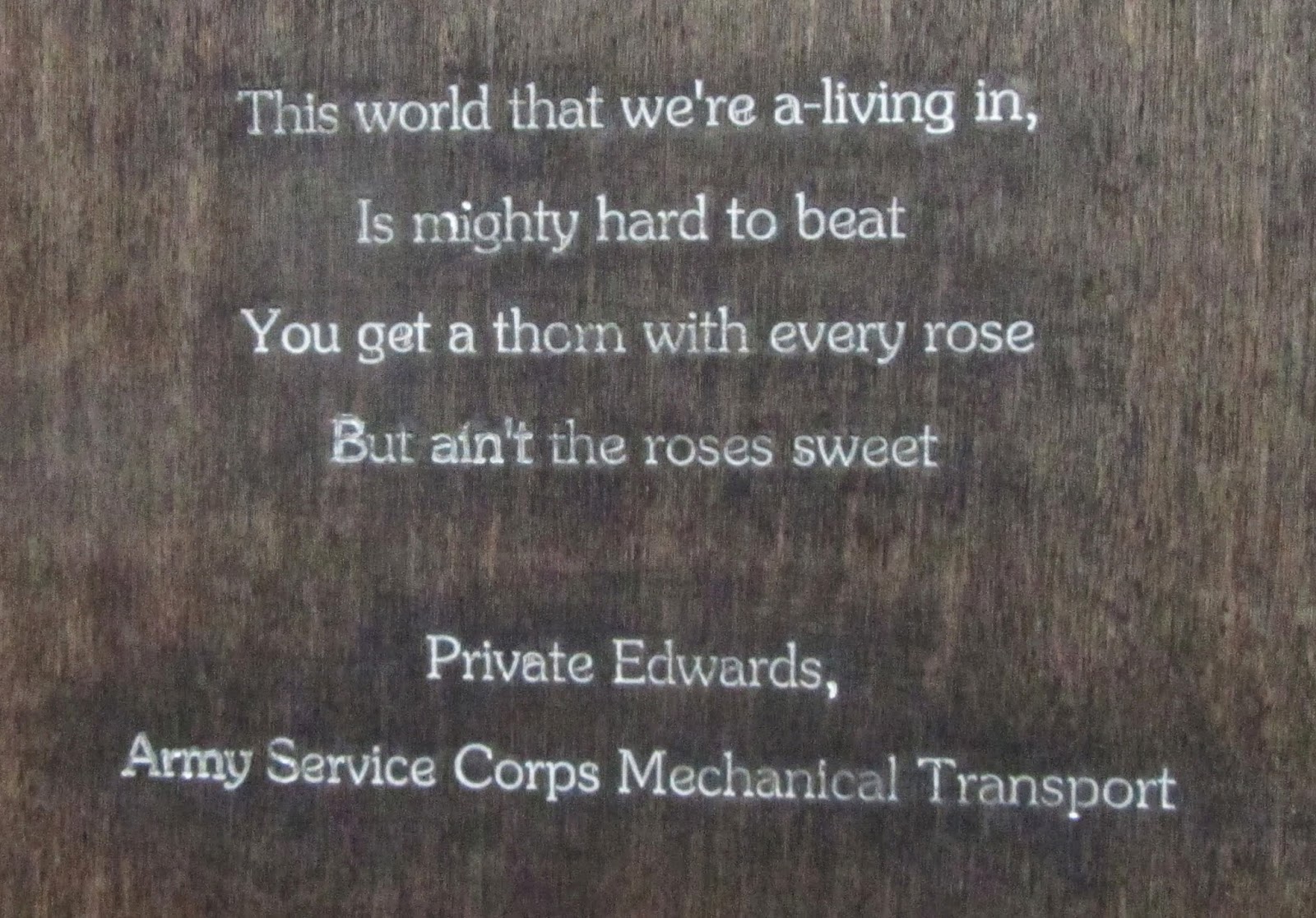 ... an extraordinary display of faith and hope in unimaginably harsh and desperate times.

Posted by Charlton Stitcher at 22:20 4 comments:

Some more experimenting with stitch and keeping everything abstract. This time I played with variations in length and interval and stitched with fine thread to keep it subtle. 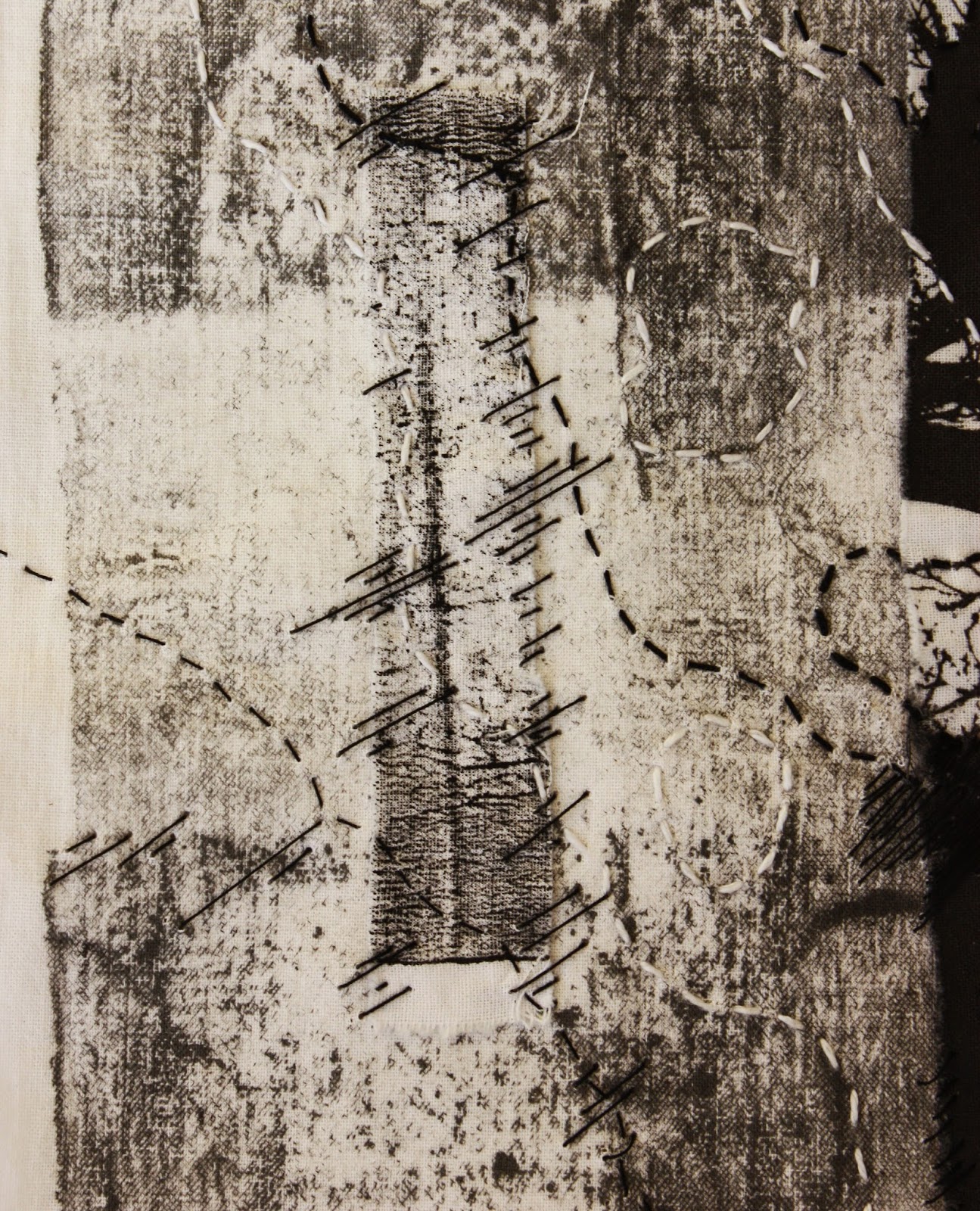 I like the widely spaced threads and this fine (it was a fine crochet thread) is good for close up detail but I will need to use perlé 8 or even 5 if it's to be seen from a distance on a larger piece.

Posted by Charlton Stitcher at 08:40 8 comments: 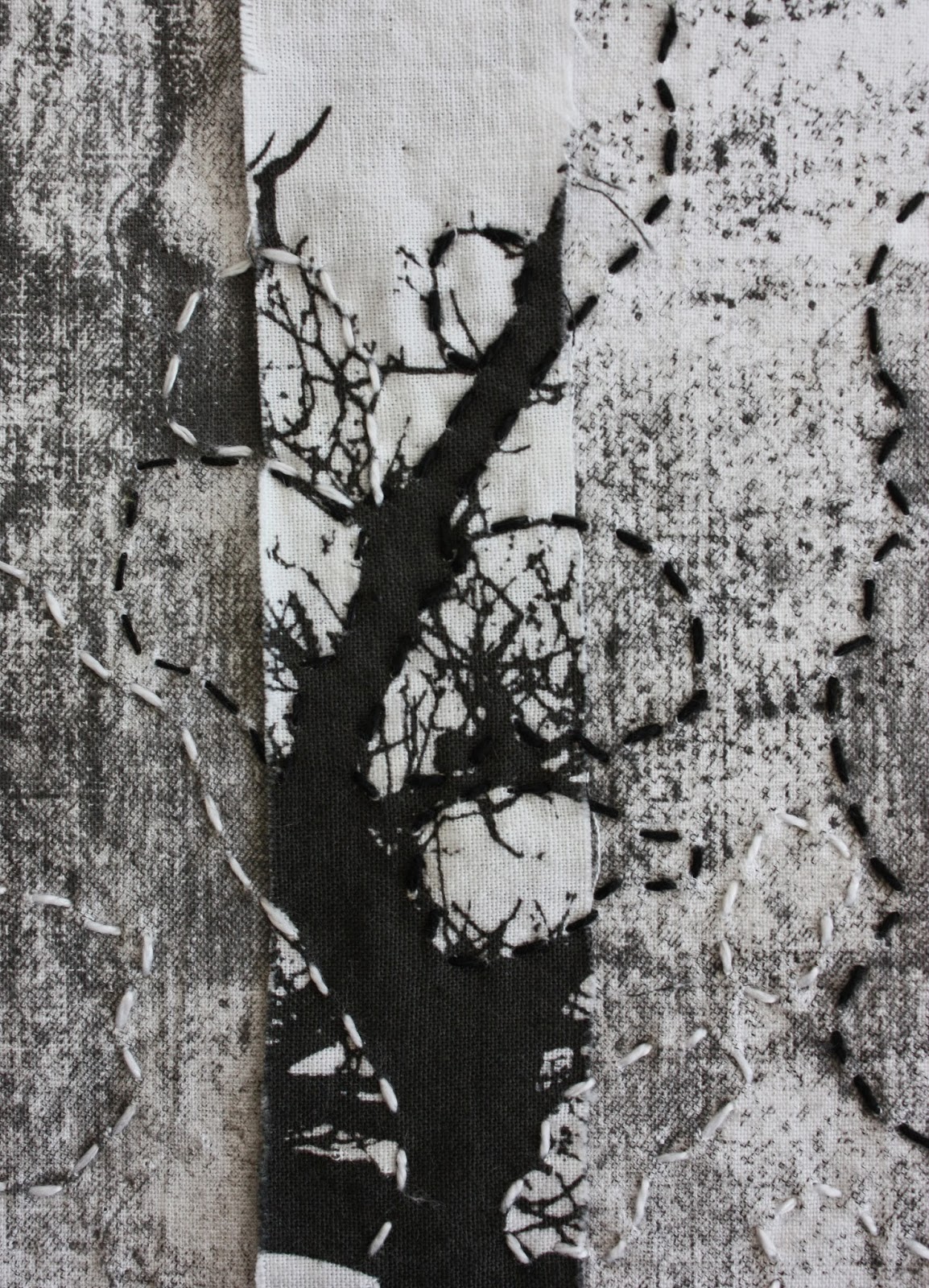 In between being busy with guests, I've been experimenting with types of stitch on fragments of black and white tree photos printed and appliquéd onto old white sheeting which was roller printed with black acrylic - very similar to the wall pieces I posted about before (to be found here and here).

This time, though, I've been concentrating particularly on the use of specific stitches to see what effects I can produce rather than thinking about the overall effect and the balance of a whole piece - the finished article was unimportant.

On the first one here, I've used simple running stitches, either in wandering lines or in circles to delineate or enclose shapes I see in the fabric. 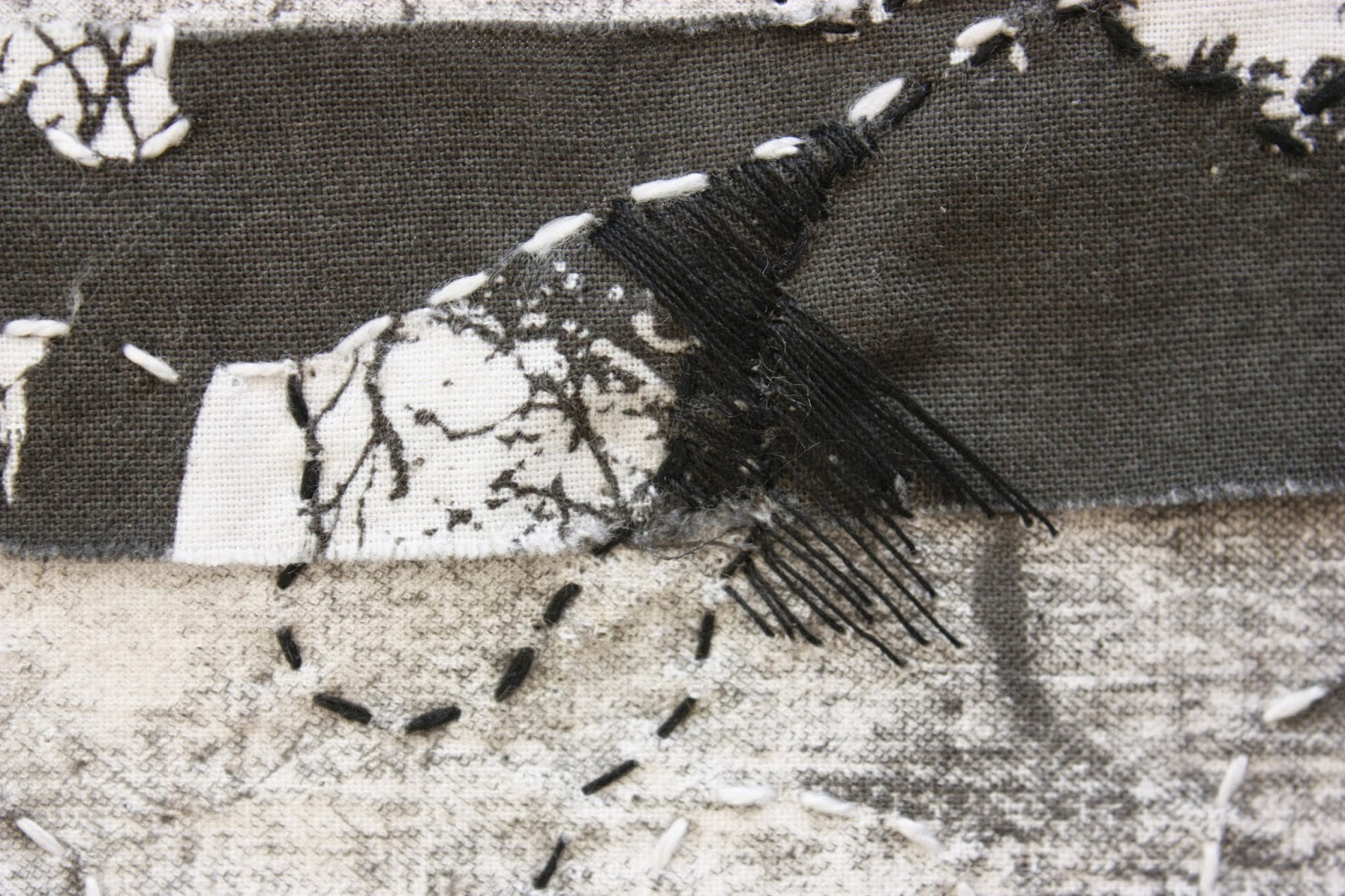 On the second, I'm using long stab stitches to break up a larger area of black and to extend into the grey ground to give texture and to integrate two areas.

There is a great deal more to try out. Next time perhaps, kantha-style lines of running stitch in close-coloured but variegated thread to break up the surface and give texture rather than to delineate or integrate shapes.


All this has been triggered by some most useful comments by Olga about the purpose of stitch. This was on a previous post of mine when I was writing about the difficulties of stitching on complex images which already have their own interest and dynamic. This has triggered all sorts of thoughts for me (so many thanks, Olga), and I sense there's much, much more to follow ...

Posted by Charlton Stitcher at 18:20 6 comments:

At the moment, we have French friends staying with us - hence little if any stitching going on but a very enjoyable time being had. This morning, in the rain, we took them to Steam in Swindon. This is an excellent museum with lots to fascinate both children and adults. (I also learnt lots of train-related vocabulary I may never use again!)

By way of a little time-out from entertaining and trying not to destroy a beautiful language, I photographed the patterns on the locomotives and in the mock-ups of the engine sheds - fascinating what texture, mark and line can the found in wheels, rivets, hoses, holes in metal and even in modern crowd barriers. 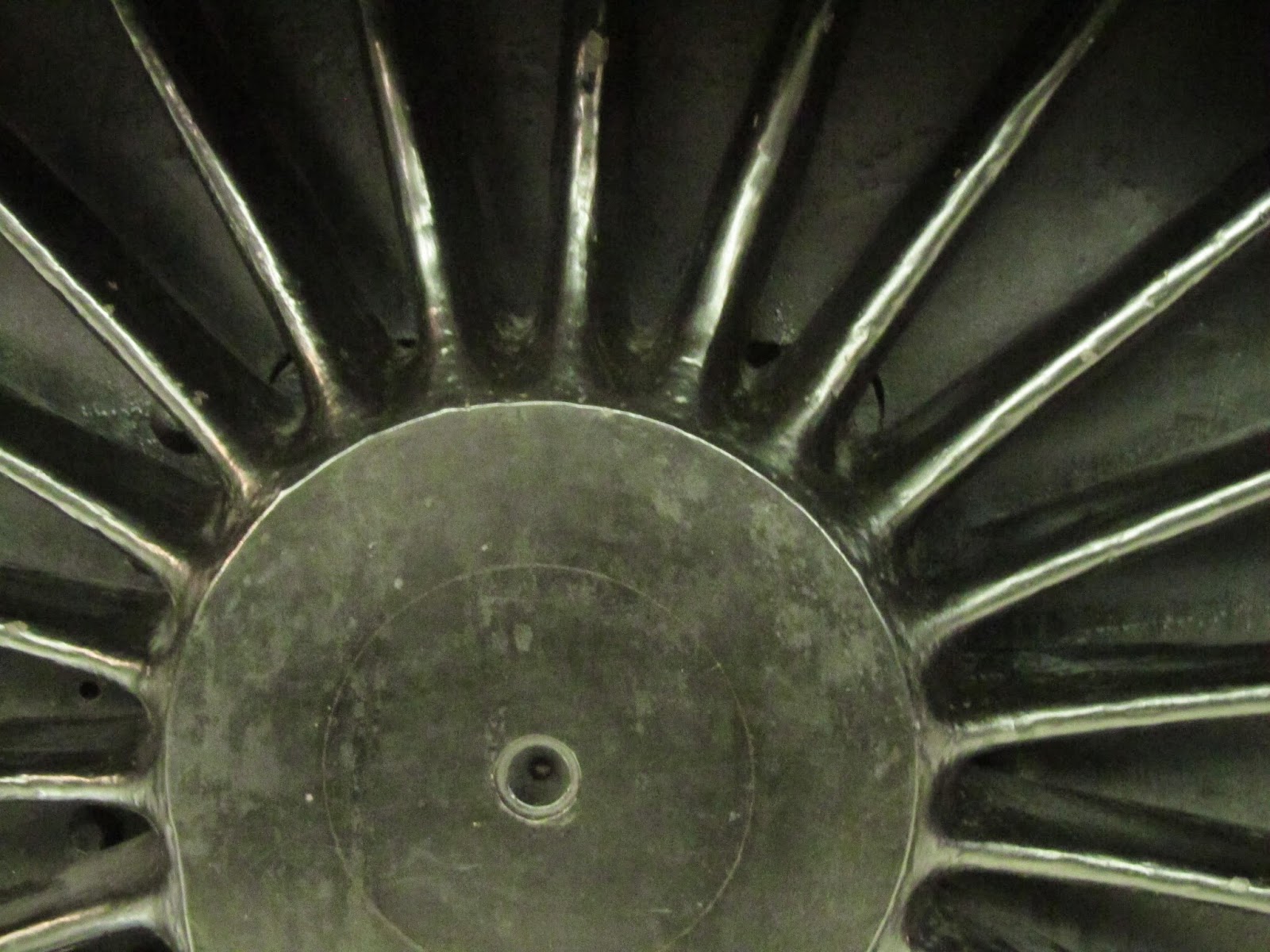 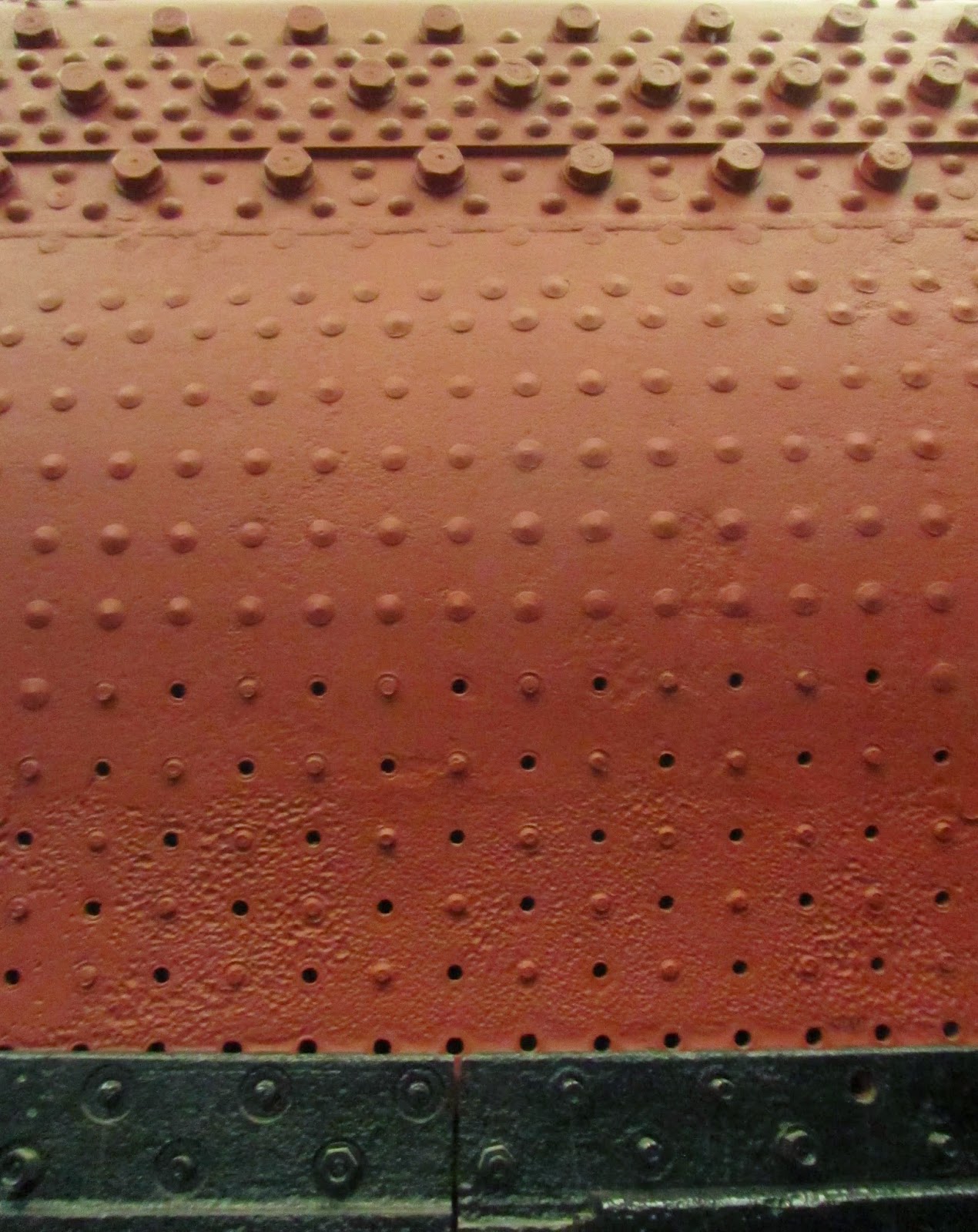 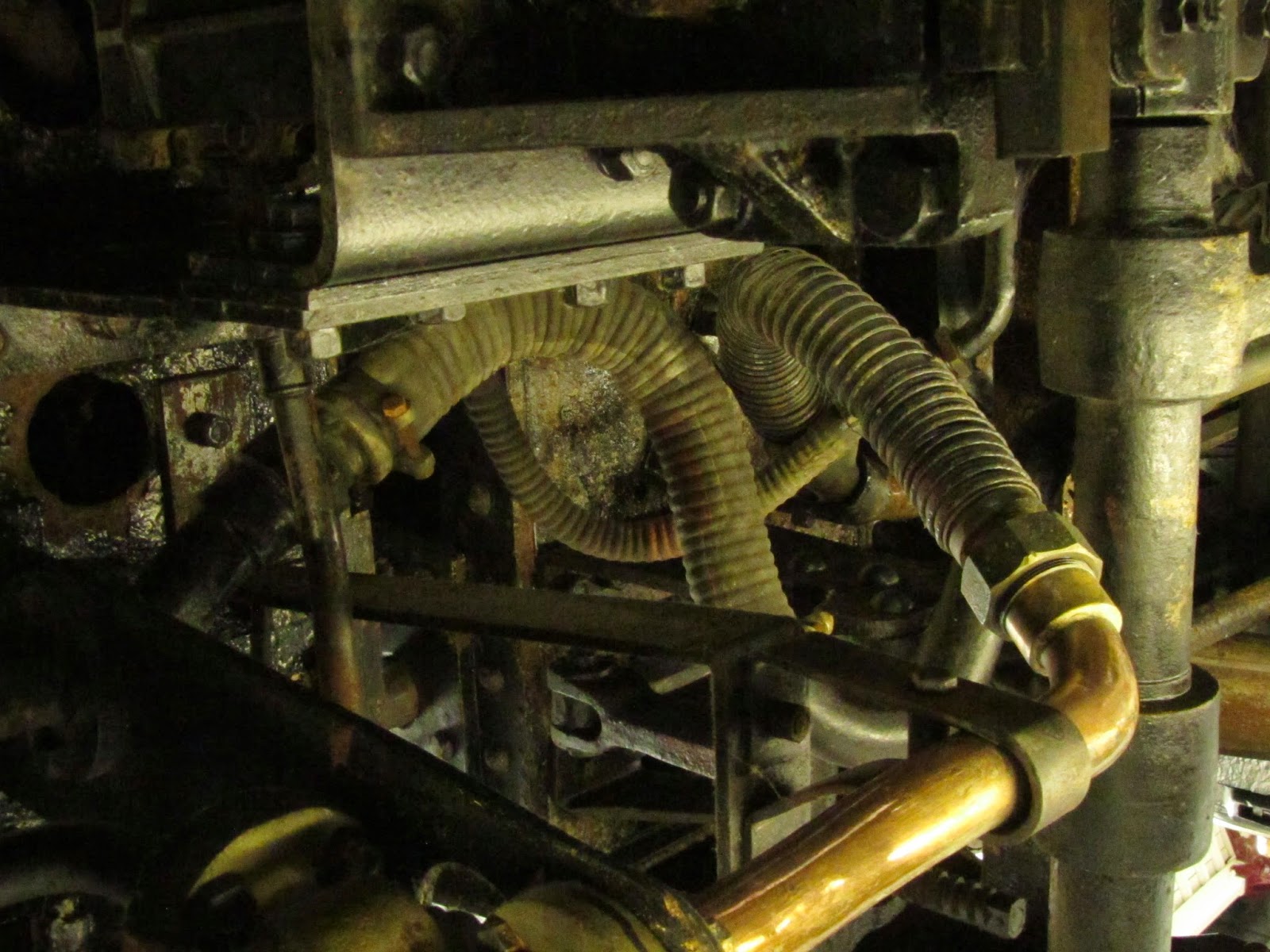 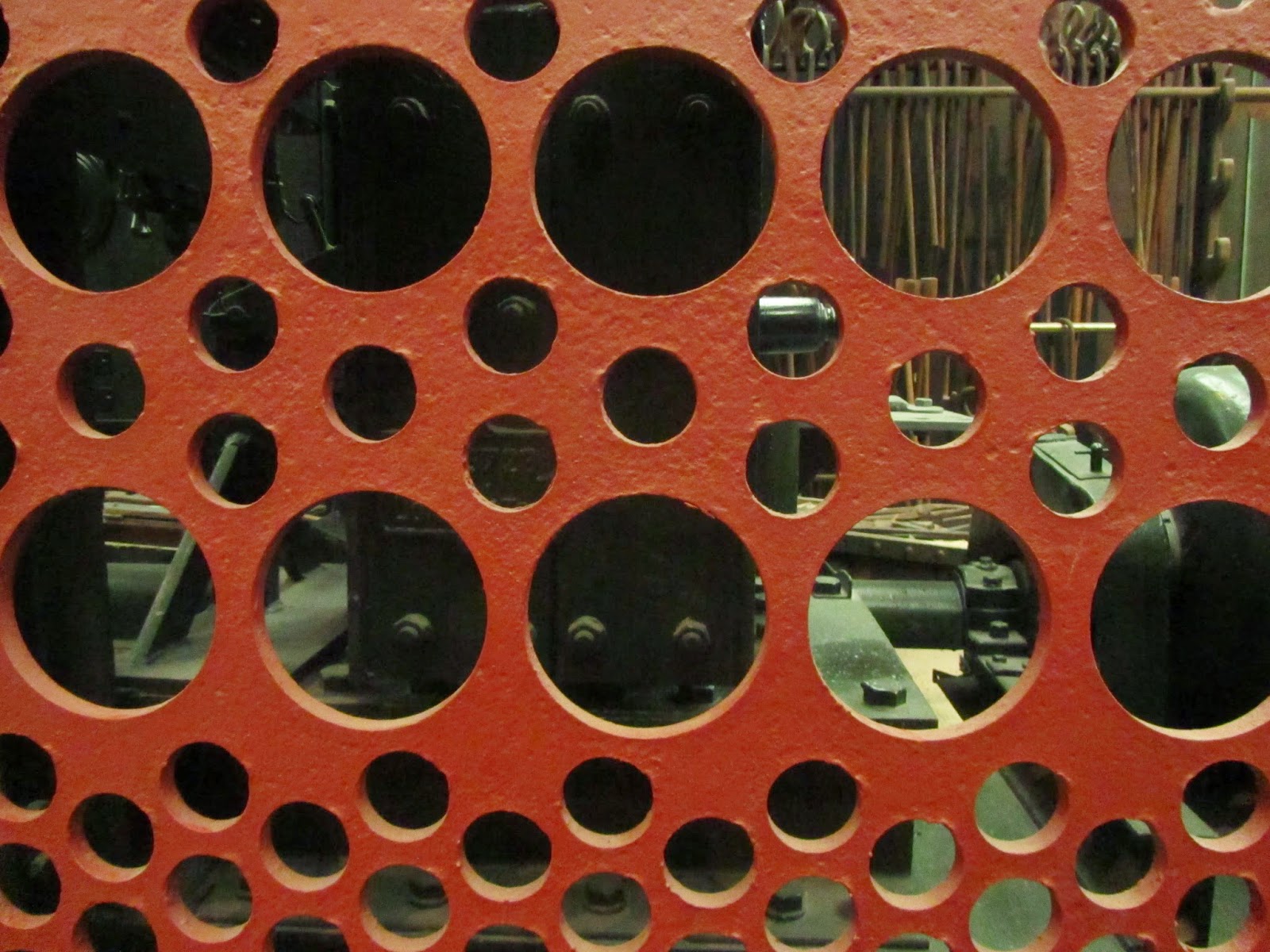 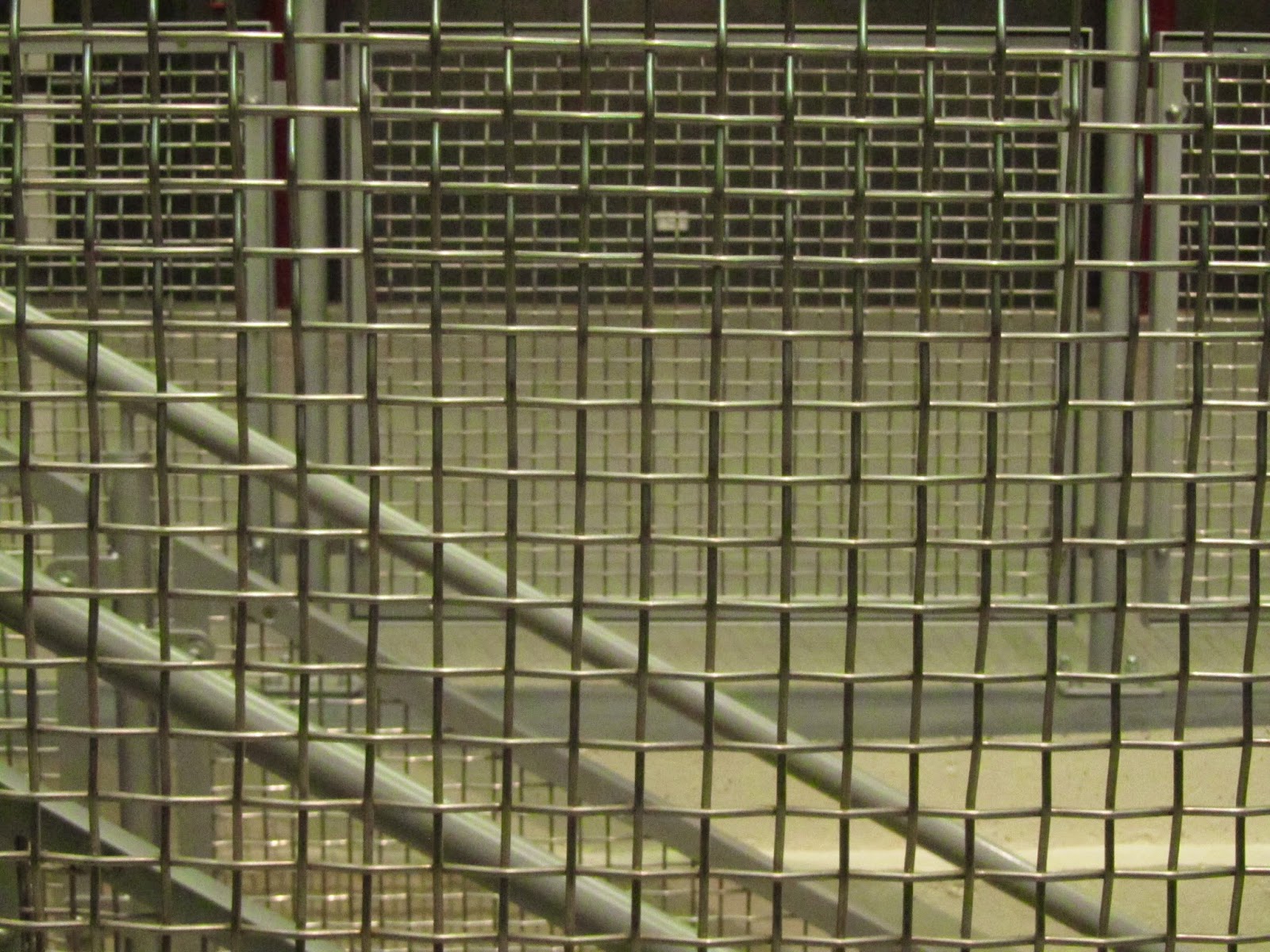 I don't usually take inspiration directly from man-made things but there must surely be some thoughts here for stitch ...
Posted by Charlton Stitcher at 23:51 4 comments: 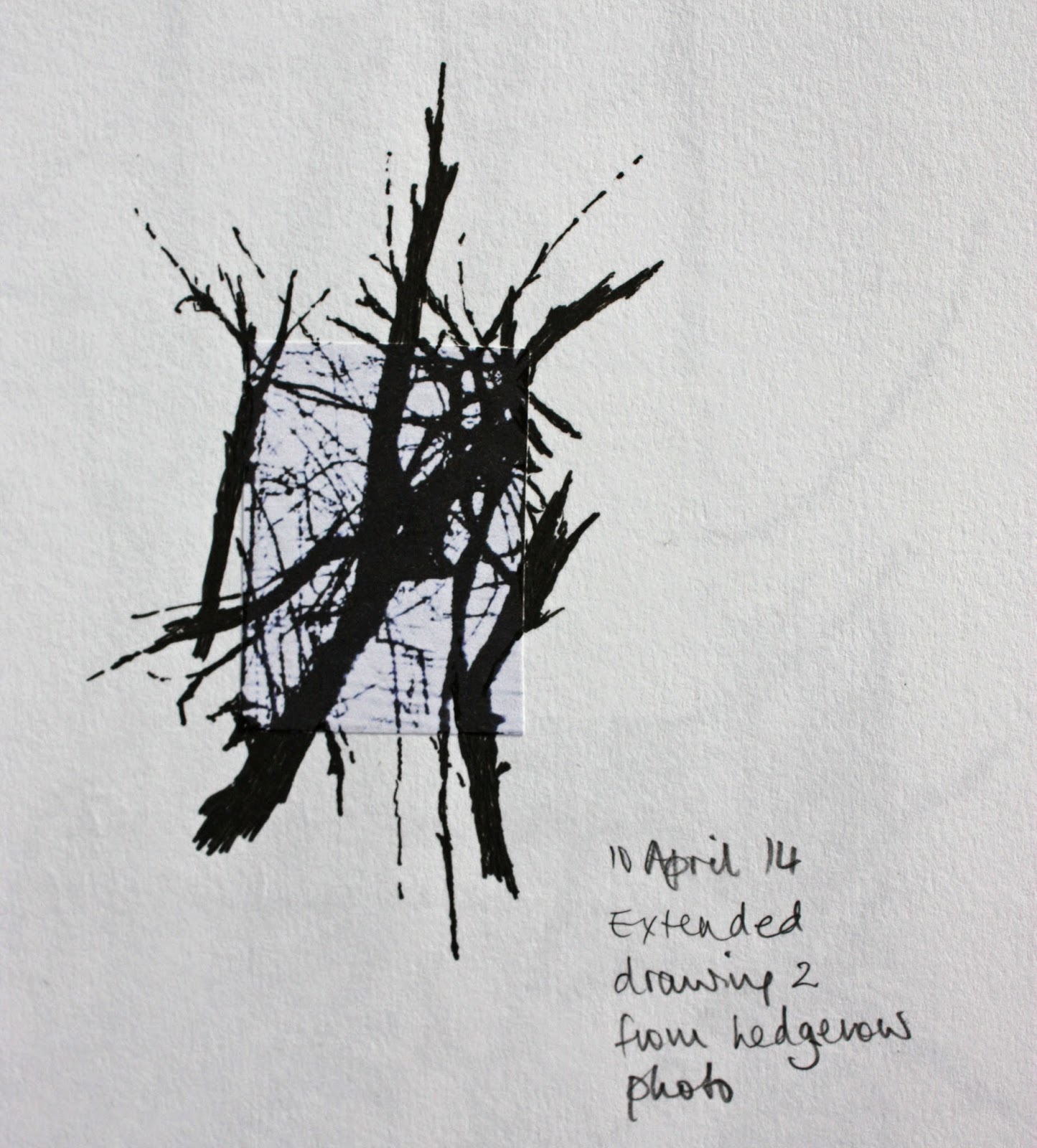 In the last month or so, I've been playing with various ideas involving all those black and white tree images. These here are small snippets cropped to size using the age-old method - with a cardboard window carefully positioned over inkjet printed paper to get the image and pattern I want, and then cut out with scissors.

Somehow, I don't find the crop function in Adobe Photoshop as flexible as this method when I'm trying to find small pieces of interest in my photos. It seems to take control of my decisions too much and it doesn't seem so personal and immediate. 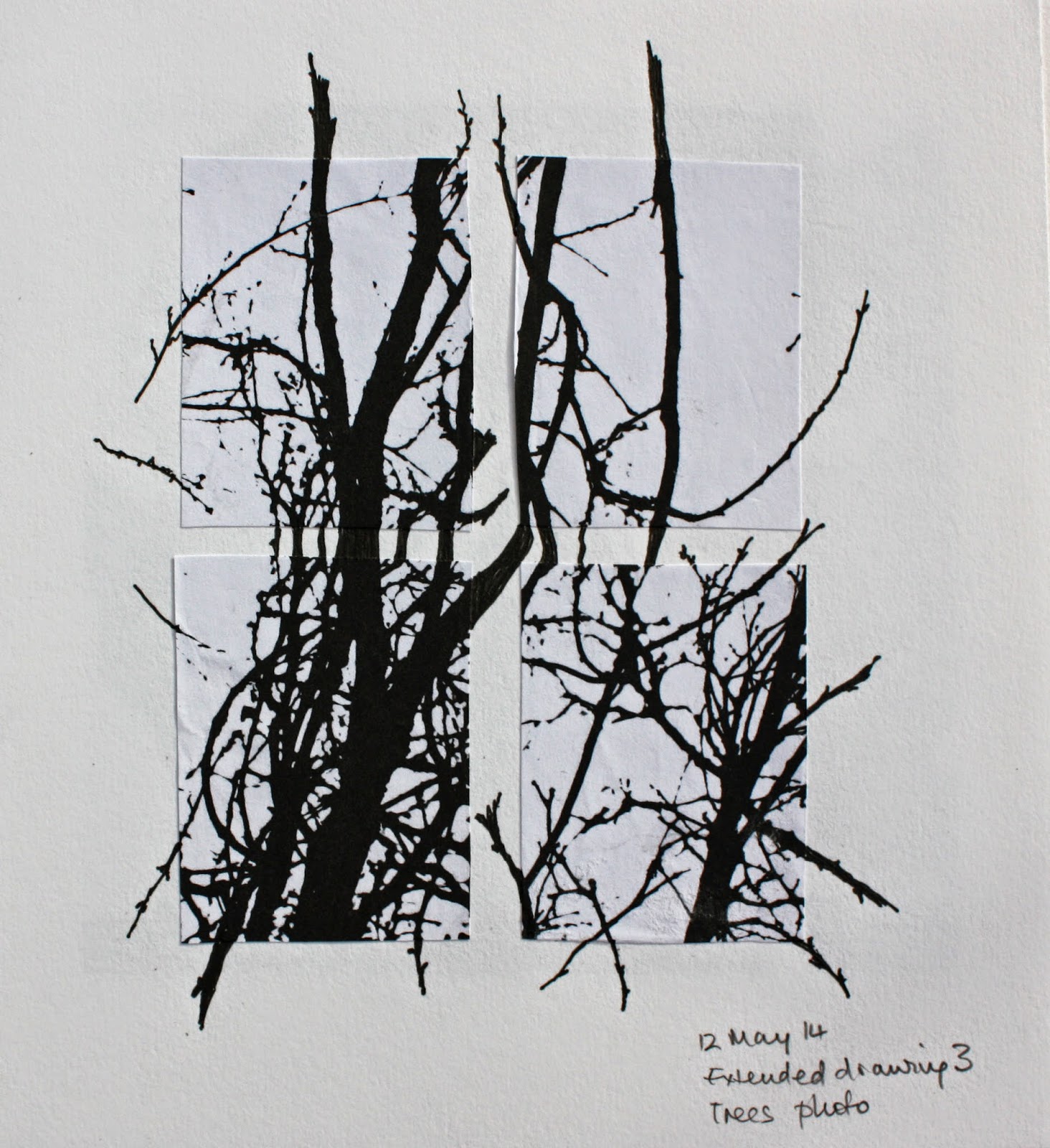 Once cut to size, I did some extended drawing with a Pitt pen, remaking selected branches and reinventing the interplay of shapes. I also worked on achieving a variety of line and mark to correspond with the original photo. It's a free drawing and abstraction technique I really enjoy.

Then I found four small photo extracts that seemed to relate to one another, stuck them onto paper together and repeated the technique, working on developing and rejoining the images. There's more to play with here, I think. 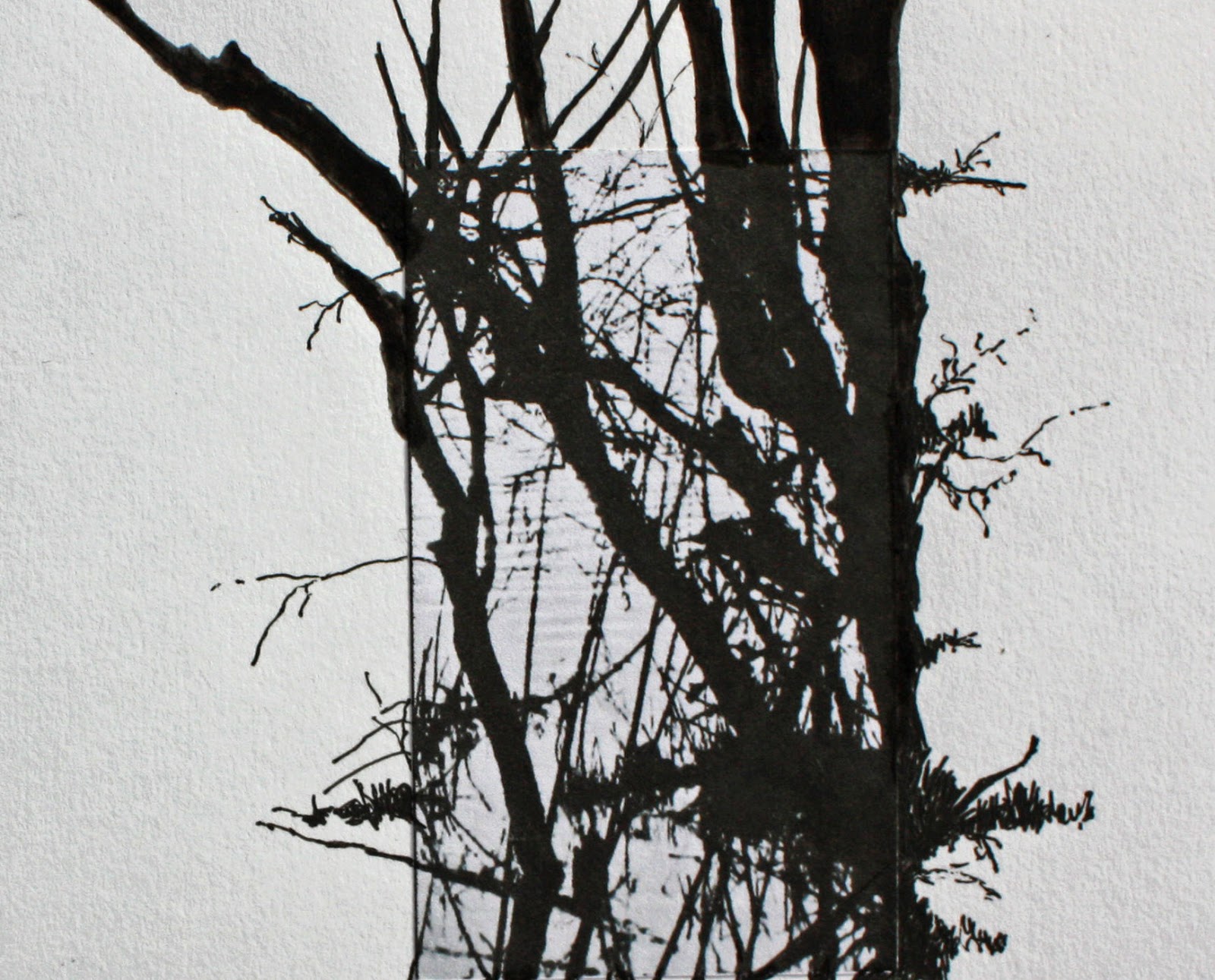 Last of all, I cropped one extended image - this time in Photoshop so I could play with rotation and contrast and ended up with two options. This first one gave detail.

And in the last, after rotating through 90º, I found a tiny landscape, perhaps ...

I quite like the results, but as it's a technique I haven't transferred to stitch before, I now have to work out how to make that translation and whether to use a cloth or soft paper ground and whether to mix with other printing ideas.