Greetings for the season

A version of our Christmas card for this year comes with my very best wishes for a good and happy time as the year turns. Its source will no doubt be clear to readers of my more recent blog posts! 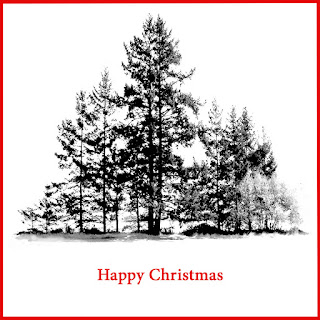 With it come good wishes for a creative and enriching New Year and, for those of you who will be celebrating Christmas with families and friends, I hope it will be a happy one.

I can only thank you for visiting my blog in such amazing numbers over the year and from such an extraordinary list of far flung destinations It never ceases to amaze me that my thoughts stretch so far - even when I go off-message for a while.  I send special thanks to those who take the time to comment. The responses and encouragement I receive are always so welcome and give context to what I do. In turn, it is such a pleasure to read your blogs and to see so much interesting and thought-provoking work being done.

This all goes to prove what a great medium of communication this is when used well!

Posted by Charlton Stitcher at 12:00 8 comments:

I've been finishing this piece for a very good friend whom I've known since I was six. 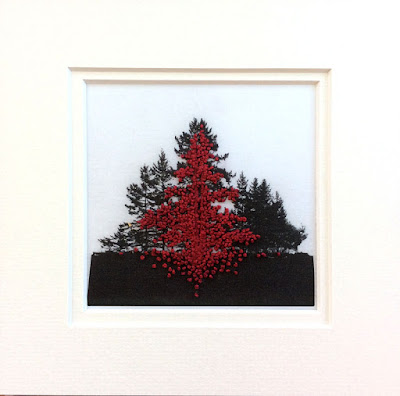 At the time I took this photo in September, I was very attracted by the grouping of the trees and their overall appearance as a group - not symmetrical but with a certain internal balance. Standing with camera in hand, I could see the potential for stitch. Conversion to black and white, some adjustment of levels to give variety and eliminate unwanted background detail and a few tweeks to the image itself and I was good to go.

I stitched in Anchor crochet 12 perlé, a fine thread with a slight glimmer that I like as it allows the delicacy of stitching needed for a small piece like this, measuring 11 cm square. I responded intuitively to the photograph, drawing the super-imposed tree shapes in stitch.

This piece is part of a small series of similar interpretations of the same image, some with black and white inverted and in different strong colours. They all originate from this photograph, taken in hot afternoon sunshine on Quadra Island BC, almost 5,000 miles from home. 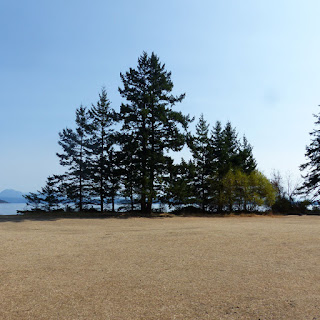 The power of monochrome and the flexibility of stitch never cease to amaze me!

Posted by Charlton Stitcher at 12:31 8 comments:

hereFor the last two or three weeks, I've been making Christmas cards, a job I do almost every year and always enjoy. I'm told by several friends that they really look forward to receiving these cards, and I guess that if there are any who would prefer that I just visit the local store they say nothing, so I persevere! For this year, I've added tags using a similar design. 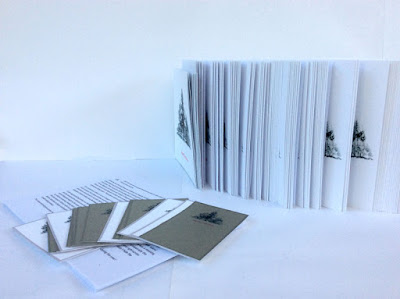 I try to use a different technique each year, sometimes a more difficult challenge than others. This time, the choice seemed easier and I used a photograph I took on Quadra Island BC during our trip to western Canada in September. I manipulated it in Photoshop as I so often do. I then printed it out onto white Matt Duo card stock from Fotospeed.com. This proved quick and easy thanks to the acquisition of my excellent Epson printer. I suspect this may not be the last time I use this technique for card making. There will be a big reveal later in the week!

Previous techniques include relief prints with my husband in 2016, paper folding in 2014 and little paper collages of landscapes, among other things, in 2013 .... and can be found here, here and here among other places.

*For those who are interested, Fotospeed.com, based close to home for me in Corsham, Wiltshire, provides very high quality photgraphic paper, printers and printer inks and an efficient online service.

Posted by Charlton Stitcher at 16:58 4 comments:

This evening, just as dusk was drawing in, I walked up the high street in Malmesbury, our local town. My eyes and ears were drawn to a group of small birds chattering and flitting about, over roof tops and in and out of a series of Christmas trees mounted on the outside of a car showroom wall. 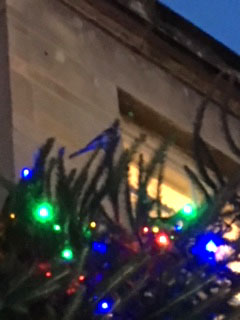 Looking more closely and taking this photo I identified them as pied wagtails (motacilla alba) - around 30 or 40 of them flocking to roost for the night in the shelter of the trees. This communal roosting in towns and cities is quite common behaviour for these little birds, though I've never seen it in Malmesbury before. 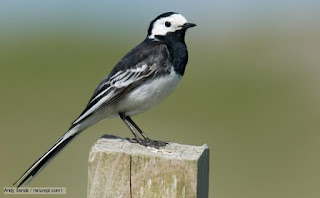 We see these slender, active little birds quite often in our garden, pecking about on the lawn looking for insects. They have been especially common just recently in the cold weather and are to be found throughout the British Isles, though those in much of Scotland and the northern isles come south in winter.

Posted by Charlton Stitcher at 19:46 2 comments:

We always get excited when it snows significantly here in southern England. It happens rarely and settles and lies even less frequently.

The forecast last night had suggested we would be south of the snow zone as we so often are but this morning, much to our surprise, we woke up to this ... 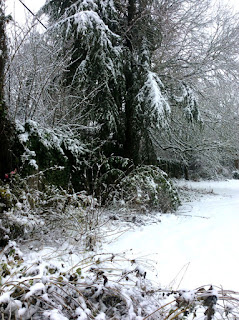 ... and it's been snowing gently almost all day. A few centimeters are now lying and it will freeze hard tonight. Photos tomorrow when sun is predicted should be even more rewarding.

Posted by Charlton Stitcher at 16:21 4 comments: