Random marks on a regular pattern

On Monday, while making marks, I played with producing regular patterns with Quink ink and a bamboo pen that I'd disrupted in some way.

In the first example, I made a regular pattern with the pen dipped intermittently into ink and dragged it across as it dried.  I splattered the still-wet pattern with the water used to clean my brushes in earlier experiments, dropping this onto the paper surface from a mop brush. I then intensified the ink in one or two places. 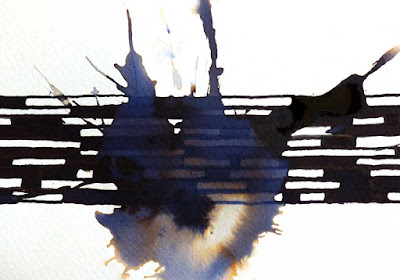 In the second case, I reversed the process. I wetted the paper thoroughly with the dilute ink / water. painted across with a sponge brush soaked in less dilute water and then scored across the wet surface with the bamboo pen creating roughly parallel lines. 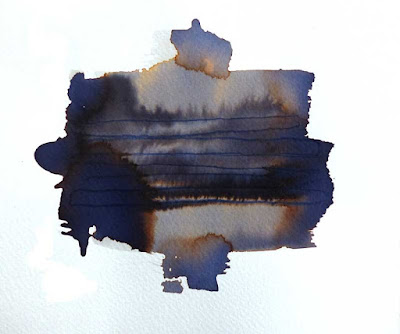 In both these, the water / dilute ink picked up and diffused the Quink and caused it to split into those satisfying patterns and colours I showed a couple of days ago. However, I have to admit, the process of photographing the images intensifies the colour (especially the blues) rather.

My next thoughts are centred around resists (perhaps stitch) and investigating the use of rock salt granules.

... The possibilities of all this are endless ...!

Posted by Charlton Stitcher at 19:17 No comments: 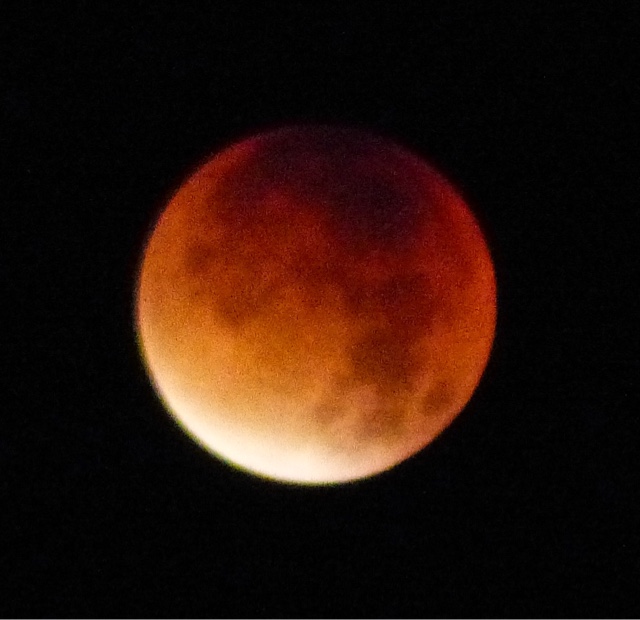 I woke up last night around 2.30 am as I often do. Remembering last night's television news, I looked outside for signs of the Supermoon lunar eclipse ... and there it was ... about a quarter of the moon nibbled away by the shadow cast across the moon's surface as sun, earth and moon gradually came into line.

This had us hooked. Cameras were grabbed, warm clothes put on and then we were outside in the cold and increasing dark waiting as the spectacle slowly unfolded. Slowly was the word ... the BBC broadcast hadn't prepared us for that ... but it was undeniably a spectacle.

I think we were the only people in our village awake and all was extraordinarily, unforgettably quiet. With lights off, uncountable stars were increasingly visible as the light from the full moon was blotted out by the earth's shadow.

As the eclipse advanced the red glow increased - although in reality, it was not as vivid as is shown in these photographs. They are undoctored but the camera lens has intensified the colour. To the naked eye, it was a gentle dark brick red. I think, looking at these photos, that the cold overcame us before the most intense colour formed. 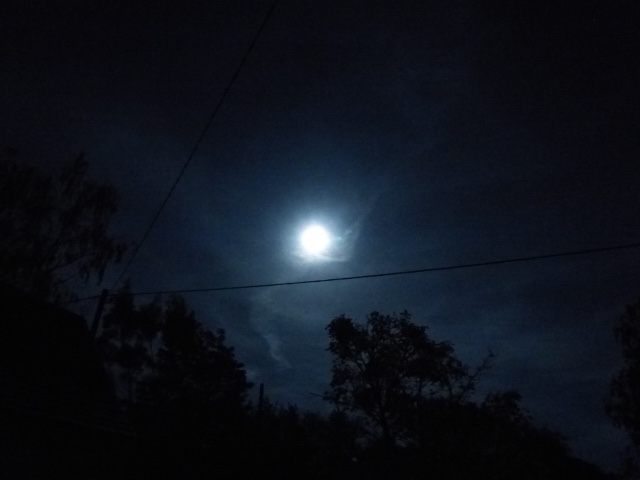 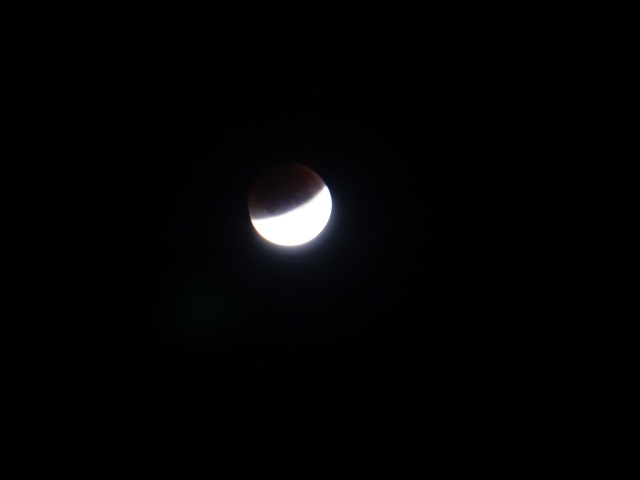 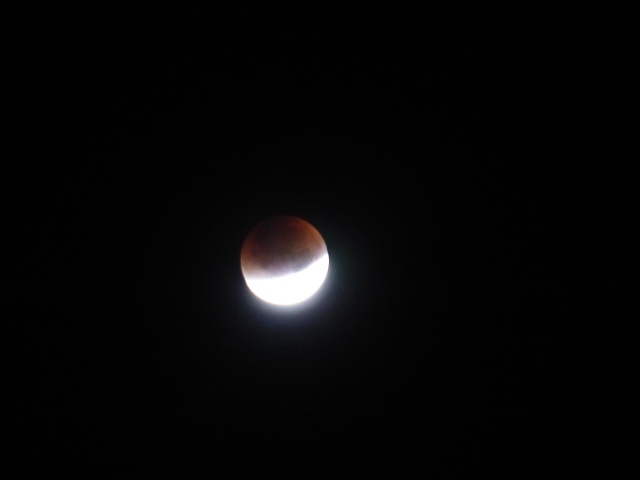 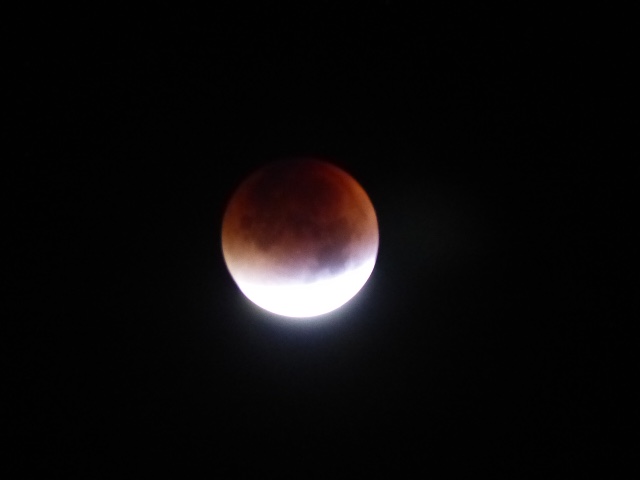 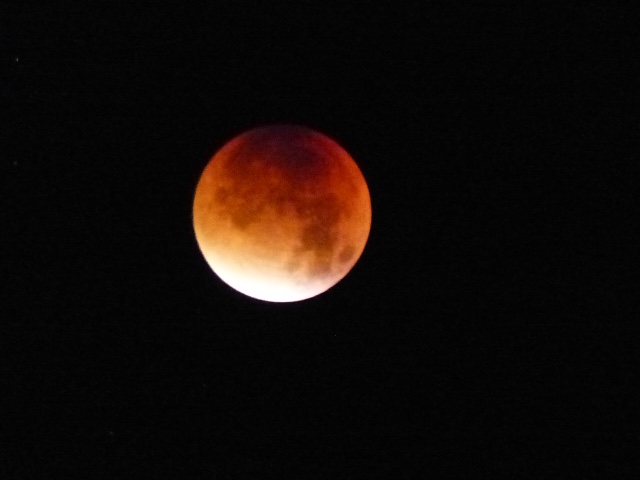 This particular sight will not be visible again until 2033 ... I know I'm glad we stood for over an hour watching it unfold. Next time, I might not be able or so willing!

Posted by Charlton Stitcher at 15:33 6 comments:

Mark making with a bamboo pen

We seem to have been away so often this year and it has all been such fun. However, we're now home for a while. Although I relish all the travel and know how lucky we are to be able to do it, to be in my workroom with time for things artistic and textile is a different sort of pleasure - and one I miss greatly when it's not a significant part of my life. I crave the peace and tranquility it brings me - and the life-giving sense of well-being.

After so long without the opportunity to be single minded though, I'm needing to break myself in gently in a way that feels very much like limbering up before taking physical activity. I've begun some focused exercises to wake up the brain and reawaken the eyes and hands.

I have returned to the making-a-mark-a-day that I found so beneficial earlier in the year. I have a new sketch book - about 8 inches square as before - and I'm posting here some of the first two days' small experiments with a wide bamboo dip-pen, water and some black Quink ink. 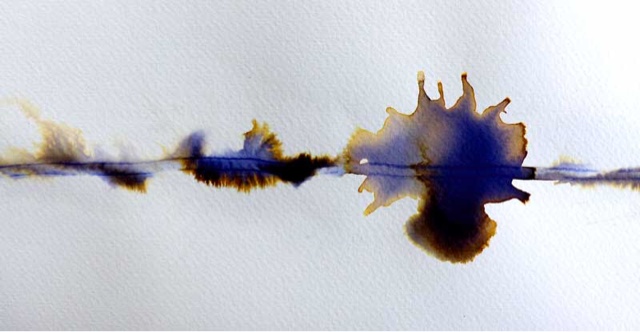 Onto several strips of cartridge paper, I dropped water from a large brush or painted it on with a wide sponge. I then drew the charged bamboo pen over the paper and through the pools and stripes of water. The ink spread and the colours bled. Black Quink ink always separates interestingly and this time was no exception. It is a favourite of mine.

I then cropped and rotated some small sections. In the first three shown here, I drew the pen through pools of water ... 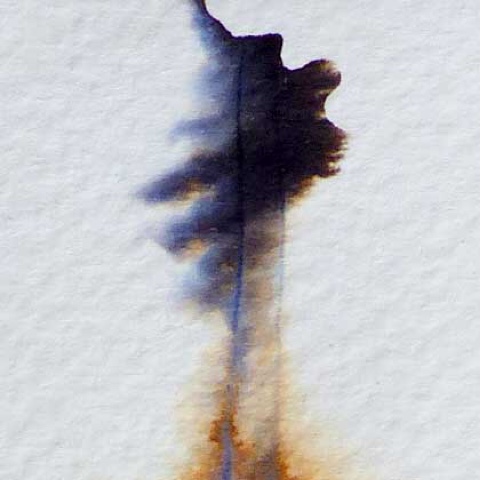 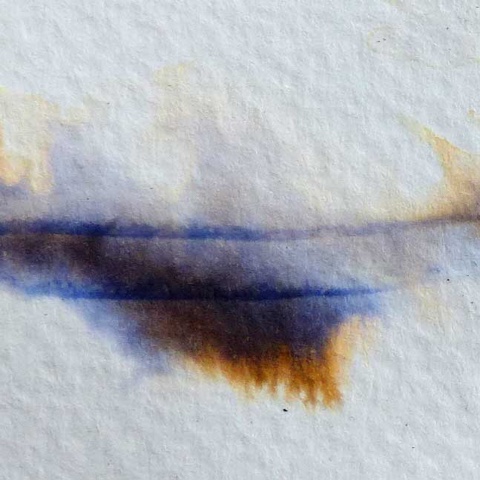 ... and in the last two, through sponge-painted water stripes taken right across the page. 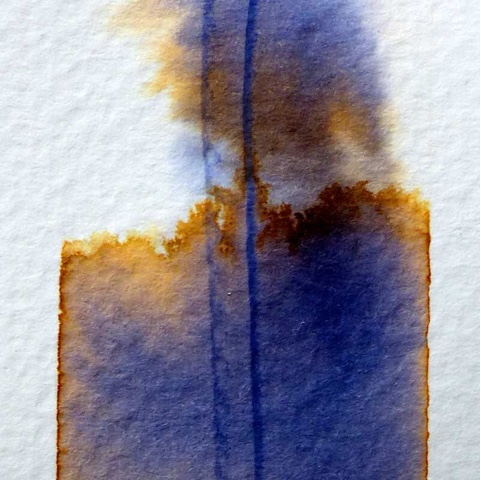 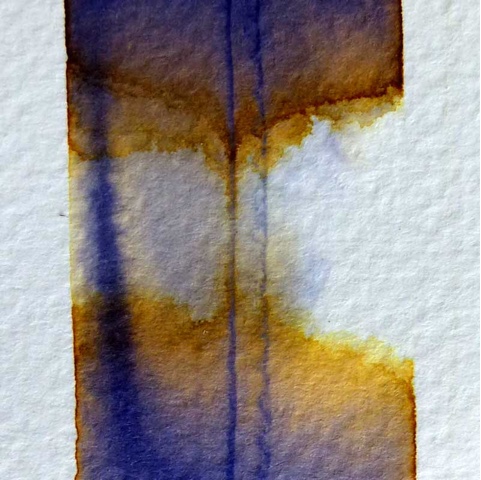 I'm feeling more 'tuned in' already, but I'll continue with this mark-making. It is very calming and seems to bring many new thoughts to mind.

Drawing from a window

In a few peaceful moments yesterday afternoon when I was waiting for a friend to arrive, I picked up sketchbook and pencil and sketched quickly in a relaxed manner and without a great deal of thought and mostly using the 'blind' drawing technique I so enjoy. In about 10 minutes I had half a dozen pages filled.

What follows is a drawing of the frame of the window through which I was looking and, on the left, the traced, abstracted, and coloured version to which I've added possible stitch lines. 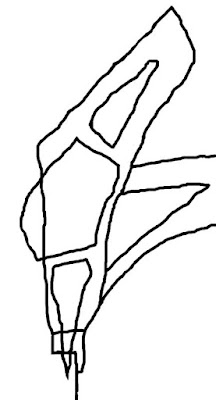 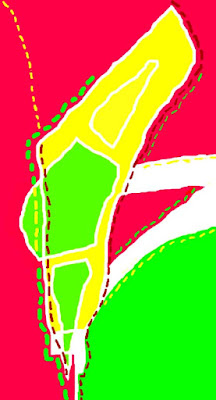 Next, another drawing and some small croppings. 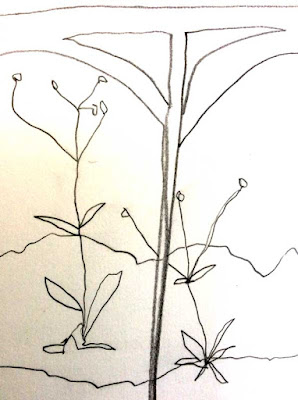 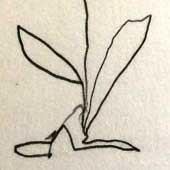 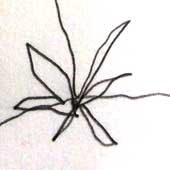 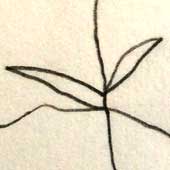 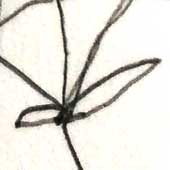 I will stitch the first but I'm not sure what, if anything, I will do with the second and its croppings ... just fun, I think ... and no harm in that.
.

Posted by Charlton Stitcher at 16:53 2 comments:

Photo to outline to image

Next week, I have to give a short introduction to the use of computers to the group (Great Western Embroiderers) with whom I stitch and exhibit. The aim of this is to awaken in those who are not familiar an awareness of the usefulness of digital and social media in the work we do. 'Short introduction?' I hear you say ... quite ... exactly the problem I have. But brief and distilled and the whetting of appetites is the only option without access to a classroom filled with computers and other hardware for everyone to use.

I've decided to focus on the manipulation of photographs for use in stitched textiles and to demonstrate some very basic techniques ... and I will be keeping it simple. In preparation (and to revise all I learnt when I took an online course earlier in the summer), I have been playing with a couple of my photos taken in Scotland on our recent holiday. Those chosen here are of driftwood sculptures on St Cyrus beach south of Aberdeen. The sequence demonstrates the process I've been experimenting with recently using a graphic tablet and stylus. Among many other things, it offers a wonderfully easy way of tracing images using the PC / laptop and from which they can then be printed directly onto fabric or paper.

The initial photo was taken from inside the sculpture and looking up, chosen for its graphic qualities. This was opened in Photoshop Elements 12 as a background layer and then converted to black and white. I find this conversion helpful in seeing the shapes in an image. 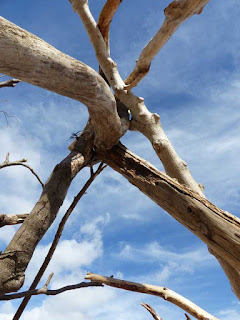 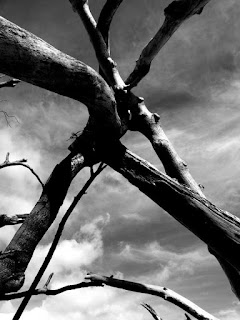 The next step was to trace the outlines of the shapes that were wanted with the pencil tool on a layer placed on top of the photo. I drew using a medium sized Intuos Pad and stylus by Wacom. The shapes which resulted were to be filled with colour so it was important at this stage to make sure that all outlines were fully closed to prevent the colour bleeding and obliterating the shapes.

The original photo was then hidden and a second (blank) layer was introduced behind the tracing layer. This was flooded with white using the paint bucket tool so the tracing showed up well. The image was then tidied up and some unwanted lines were removed. 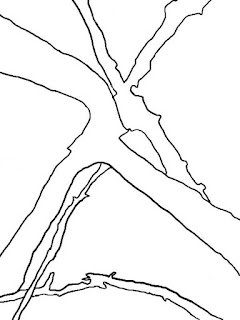 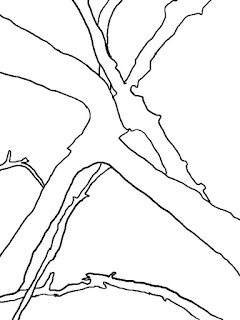 Colour was then dropped in using the paint bucket in various colour combinations and some were rotated and cropped. 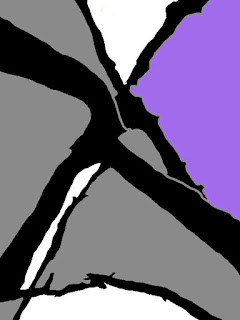 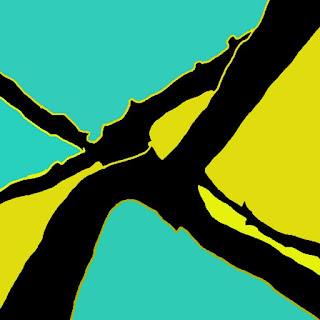 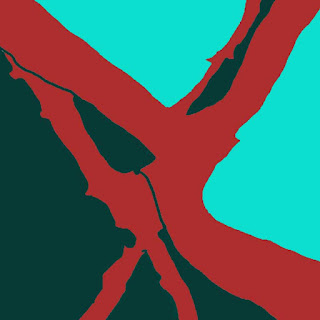 I see this particular technique as very useful for apliqué and in creating fabrics with coordinated colours for quilt making since the colours can easily be transferred from one fabric to another and repeated, though I'm sure there are a thousand and one other uses.

Another image was created from a different driftwood sculpture ... 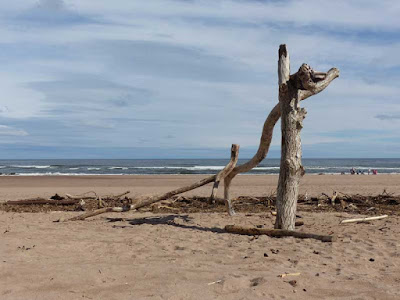 ... and from a 'blind' drawing I made on the beach from a slightly different angle .. 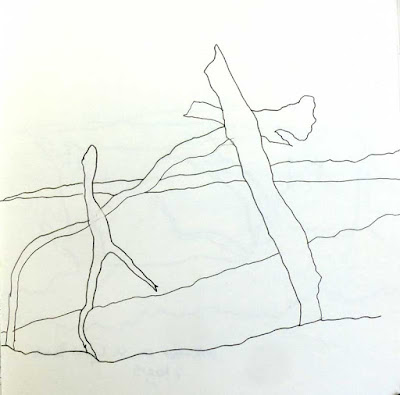 ... and traced in the same way from my original drawing. It was then cropped and filled with black, white and grey to accentuate the graphic nature of the image. 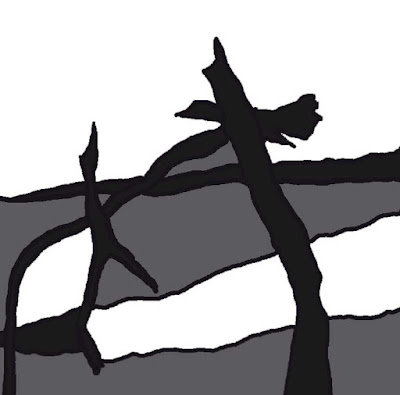 And now to find a landscape image for use with the same technique ... particularly useful perhaps for the members of our group given our next area of focus.

Posted by Charlton Stitcher at 19:47 4 comments: