A bouquet, thinking of family tradition and New Year wishes 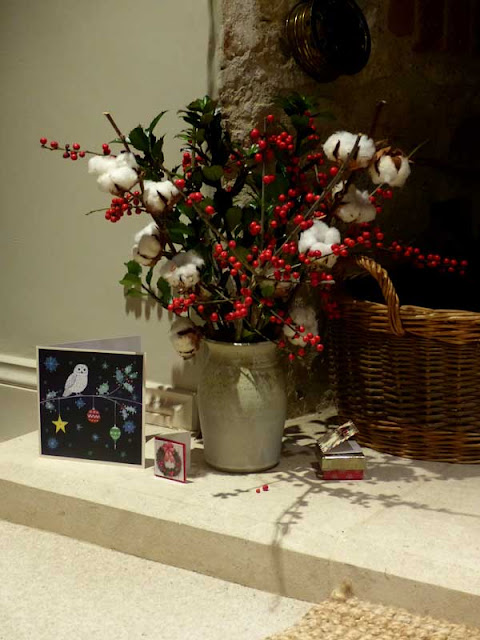 For the first time in more than 40 years of marriage, there was no time this year for us to find and decorate a Christmas tree. We were so recently returned from our long trip to Australia and New Zealand and then so quickly away for Christmas with our son and his family that this tradition had to be abandoned.

Like so many, I'm sure, our boxes of decorations contain many items of memory and family significance. There is the wired bundle of tiny kindling - winter fuel - given to us by a family member who died young. There are decorations made or chosen by our children, a few given to me by children when I was teaching, and there are even one or two pieces, now rather tired, from our own childhood.

I really missed the ceremony of buying and decorating and the chance to think on these memories. A stand-in had to be found. My solution was a visit to our nearest supermarket to buy this bouquet - a poor substitute with no scope for decorations - but, together with Christmas cards, it has lent a suggestion of festivity to our home. I placed it in one of the stoneware vases I threw in pottery classes about 25 years ago for a small hint of our past in the Hertfordshire house where we bought up our children.

It comes today to say thank you for visiting my blog over the past year, even when I don't post very often. Sharing work, thoughts and experiences with you all is one of the pleasures of the internet for me and I send a special thank you to those of you who commented and provided useful advice. I will visit all your blogs with my usual enthusiasm in the year to come.

Happy New Year to you all. May 2016 bring you happy memories and a fulfilling time artistically.

This is the final month of the Roy rainbow colour posts and time for a big thank you to Julie and Jennifer who have organised it all. Good it has been to join in each time and fascinating to see all the photos and the thoughts put up by all the other bloggers.

Christmas has already started for us so we're away staying with our daughter and her family for the weekend, having Christmas five days early and building a trampoline in the rain! Photos for this post are therefore limited but here is one that seems to feature all the colours we've included over the years - an extraordinary light show on a mesmerising black and white ground by Brook Andrew seen in the Museum of Contemporary Art in Sydney, Australia. 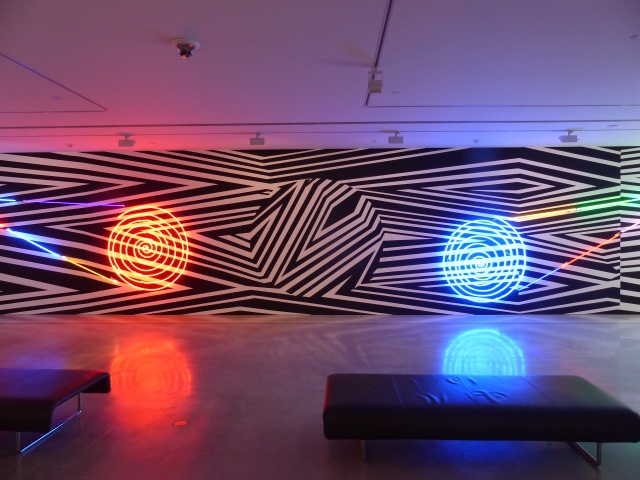 Called Loop: A model of how the World Operates, it was completed in 2009 and occupied two complete walls of a gallery. I found it utterly mesmerising and it has stayed with me, coming regularly to mind at unexpected moments when I have little else to think about.

Brook Andrew is of the Wiradjuri nation and now lives and works in Melbourne. Quick research tells me that he uses graphic black and white in much of his work. Perhaps that is why it appealed to me so much. The explanation beside the piece described his work as (I paraphrase) a fascinating marriage of contemporary art practice and Wiradjuri language and the actions of memory and history that are so much a part of aboriginal culture. It was indeed extraordinary.

If I don't have time for another post before Christmas, this also comes with good wishes for a happy holiday to those who celebrate it and thanks to all for reading and commenting on my many posts over the year.

On making art with my camera

When I'm on a long trip, I take a huge number of photos. This time in Australia and New Zealand, I amassed over 4,000 in five weeks. I thank heavens for digital cameras and, although a big culling process will now be needed, the taking of these photos is a very important part of the experience for me. I look at everything I see in a different way when armed with my camera and notice shape and colour and graphic possibilities constantly. Without a good camera, where this is possible, my experience would be lessened. 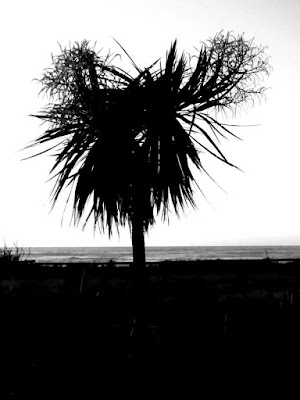 So what photos do I take? Of course, many are a straight forward record of memories of people and places visited. However, if I learnt one thing while I was away this time, it was just how much I feel as if I'm 'making art' when I look through the view finder and take a photo. It seems to have become an essential part of my art practice and gives me great pleasure.

This time, I was especially taken with the huge variety of trees I saw, from the robust tropical species in Singapore and Northern Queensland to the conifers and small thorn bushes on the alpine mountains in New Zealand. They came alive and dead, in rows round fields (lots of them), in small random groups, singly, and of course in vast, uncountable numbers on the mountains and hills everywhere. Here are samples, now in black and white since that seemed the best way to exploit their potential and anyway I just couldn't resist the temptation.

In the photo above, taken at Hokitika on South Island, it was the outline shape and the spiky, ragged, 'bad-hair-day' nature of the palm fronds that amused me as it was silhouetted against a light sky.

With this small group taken near Uluru, it was the contrast between the strong trees and the fine, whispy grasses that carpeted the earth around them that caught my eye. 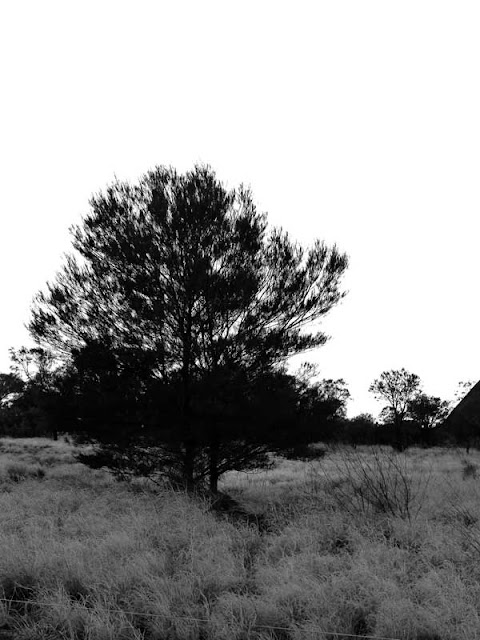 In this one in central South Island, I was fascinated by the line of trees with its delicate shapes made by the spindly trunks topped with a crown of leaves.

In this one, it was the negative shapes confused by the fence posts that interested.

On this trip, I took my Panasonic Lumix DMC-FZ200 bridge camera with which I have been delighted since I bought it last year for a previous trip. I know I've posted about it before but it continues to be extraordinarily versatile with its excellent in-built wide angle and zoom lens. I like the fact that, although smaller than a standard DSLR camera, it has both a view finder and a closeable small screen for reviewing photos on the back. Especially important on a long trip like this, it is very light in weight and compact and fits into a small canvas shoulder bag along with other basic essentials when I want to hide the fact that I'm a tourist.

Posted by Charlton Stitcher at 22:38 4 comments:

Now home at last from our recent trip, I'm beginning to digest everything I saw and experienced.  It was all so fascinating and there was such a variety of visual delight everywhere we went. I have much to think about and it will take time to work out where the new experiences will lead.

Meanwhile, as I download my photographs, I've been having fun sifting and sorting. As I travel around with my camera, I'm always on the look out for examples of the quirky, the bizarre, the unnerving and the unusual. A few favourites have so far surfaced from the myriad of photos from the holiday.

I start with a pair of quirky animal sculptures seen as we waited to go on a crocodile spotting river cruise down the Daintree River in Northern Queensland. These two were made from recycled metal cans painted in primary colours and were most appealing. I'm afraid I can't attribute them accurately but couldn't resist including them. 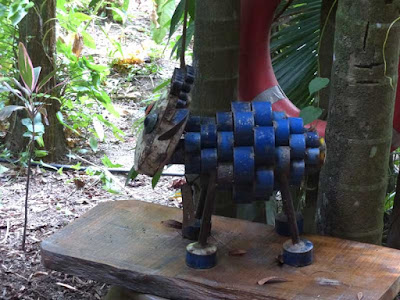 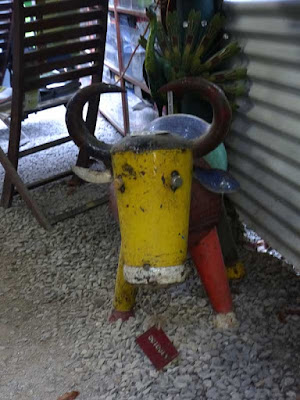 My favourite bit of fun was found in a shopping mall in Alice Springs - Santa's sleigh being pulled by six leaping white kangaroos and if you look closely, you will notice that the reindeer on the front left has a red nose (of course, he's called Rudolph!). 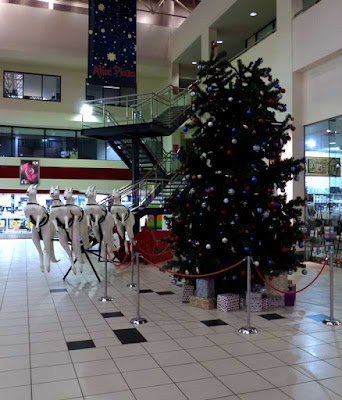 Now to things more serious. We really enjoyed the many bronze sculptures placed all around Singapore, some by familiar names such as Henry Moore and others by local artists which often depict the early life of the city. As we explored, we saw several in quiet corners including these two in Telok Ayer. Both were by local artist and sculptor, Lim Leong Seng. The first, Telok Ayer's Beginnings, commemorates the members of the Malay fishing community who lived in kalongs (wooden huts on stilts over water). 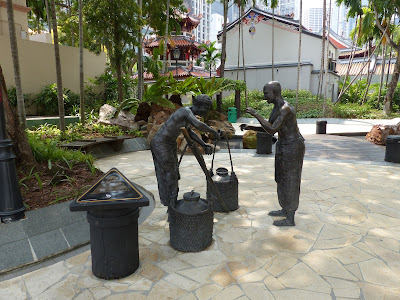 ... and the second, called Chinese Processions, records the importance of festivals to the Chinese community both now and in the past. 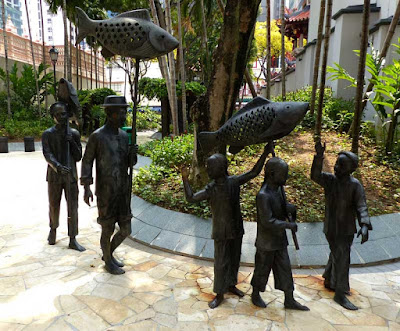 Then from a harbour cruise boat, we spied this, First Generation, Fullerton Hotel 2000, by Chong Fah Cheong, showing how boys in the early days of Singapore used to enjoy jumping naked into the polluted river waters below. More details of all the sculptures can be found here. 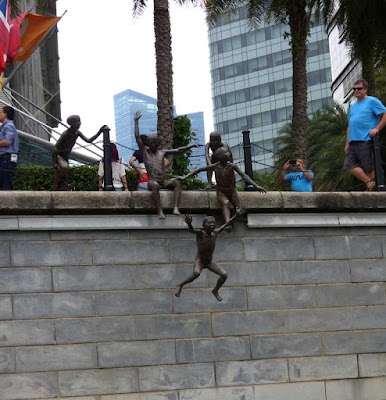 Last of all, I include La Famille de Voyageurs, a bronze work by French sculptor Bruno Catalano, which we saw in Gardens By the Bay. It was a gift from Singapore Changi Airport to the Gardens. Although slightly unnerving, I found this work most compelling and spent much time enjoying it and returned to look again before I left the garden. 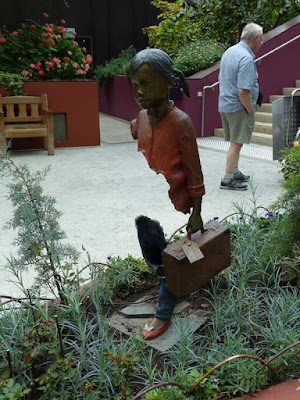 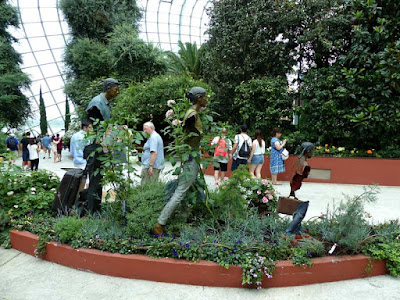 As the notice beside the work said, 'His works, with their dashed bodies and the deliberate lack of volume, invite you to mentally reconstruct the possibility of the human potential.' This piece explores the universal theme of travel and depicts a family heading for the airport on their way home after a visit to the gardens. They take with them their memories, and leave a part of themselves behind.

Isn't this so true of all successful travel?
Posted by Charlton Stitcher at 20:07 2 comments: