Today I held our latest grandchild, William James - less than 24 hours old and freshly home from hospital. It is always such a joy, this first meeting. 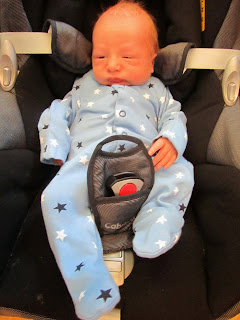 He brings the total to four grandchildren for us, two for each family. They are all under 4 years old, and such fun everyone of them.

We will go and visit properly next week when they are ready for us. Till then I have this hastily-taken photo of him in his car seat taken as I left to give the family time to adjust to the new life.

... Adobe Photoshop Elements 12 for Christmas ... the signs were read and interpreted!

All I need now is the time to work out how to use all its features.

I will post interesting results as they happen ...
Posted by Charlton Stitcher at 19:49 7 comments:

Thanks to all of you who read this blog and whose blogs I read for the hints and advice and for the pleasure of looking at your work. All the bloggers I follow inspire me. I learn so much from what I see so a thousand thanks to you all. 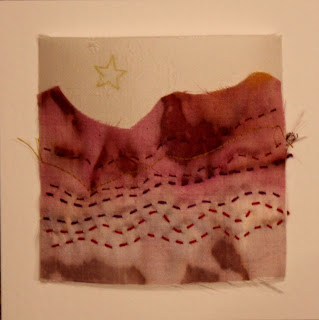 Happy Christmas and good wishes for 2014. May it be a happy and creative year for you.
Margaret
Posted by Charlton Stitcher at 09:15 6 comments:

Black and white and framed again

And here is another piece of the Cotswold Hills in black and white pattern. I have in my minds eye the patterns of footpaths, hedgerows and contours as they wind across the hills close to my house and - as seen from the air as birds might fly - haphazard and somewhat random. 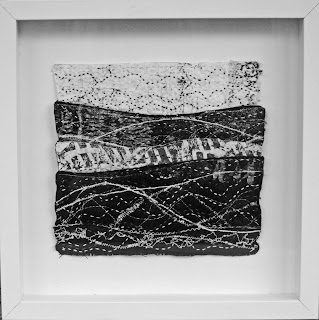 It's similar to the last - framed and still small but this time with a printed motif to suggest stone walls. I gave the last to a friend - always a pleasure.

This time it's to be a small present for my son. I just hope he likes it ... 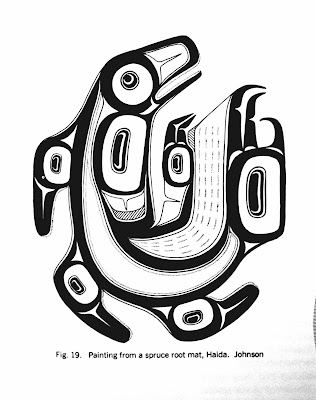 During a very much needed tidying session this morning, I picked up a book and put it on a bookshelf and then noticed its neighbour - a book on the art of the first peoples of the Pacific coast of Canada. I took it off the shelf and it returned me instantly to the two years I spent teaching on Vancouver Island in the early 1970s.

Looking again, I remembered how much I had loved the stylised, dramatic, graphic representations in the masks, totems and other objects - mostly in black and white - produced by the Cowichan people. I haven't thought about them for so long, although I don't know why, considering how much I've been playing with black and white recently. Perhaps this visual treat from more than 40 years ago is the source of this current preoccupation - who knows how the mind works?

Of course, I stopped the tidying to look at the book, and then to google ... who wouldn't? Now I thought I'd share with you some of the images in the book and the websites I came across.

This is one of the most dramatic images from the book  - a woven spruce root hat from the Tlingit of the northwest coast of the mainland of British Columbia... 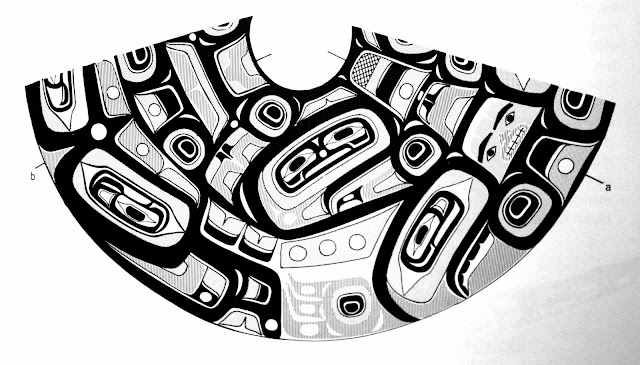 Putting traditional art of the Cowichan people of British Columbia into google yielded a lovely montage of photographs and this website:
http://www.cowichanvalleyartscouncil.ca/artists.php

It provides an amazing list of artists that I will investigate at my leisure. It also gives a large hint about how far the art of this area has gone in the 40 plus years since I lived there..

When I think more widely, I also find it quite fascinating that the art of first peoples across the world shares so many of the same elements - simplicity of image, stylisation and of course references to their complex belief systems ... even more to investigate and explore.

PS the book is by Bill Holm and is called Northwest Coast Indian Art - google him and his book too and you should get another wonderful photo montage.
Posted by Charlton Stitcher at 17:13 6 comments:

Although I seem to be finding little time to stitch right now - and especially to plan or start new work - I have been reading in my small snippets of down time. 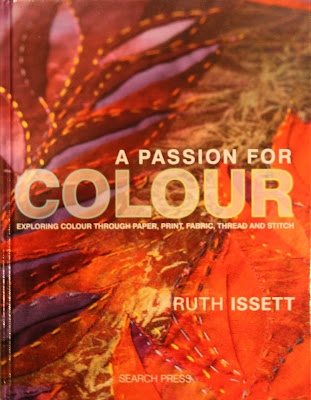 One book that has especially enthralled me is Ruth Issett's beautiful new book A Passion for Colour. The book sings with colour and an irrepressible enthusiasm for exploring the possibilities.

As in her earlier books, she explores the use of print, dyeing and stitch on paper and fabric but the examples shown in this book seem particularly vivid and exciting. Every page shows unexpected juxtapositions of colour and, towards the end, there are some beautiful examples of her work together with explanations of how each piece was developed. I found all these fascinating.

Within the book also, I found many hints and ideas for developing my own use of colour and I will be trying these once Christmas is over and I have more time.

This is a beautiful and exciting book and one I know I will return to again and again for inspiration and ideas.

PS There are hundreds of pictures of Ruth's work out there on the web on this link and many others so I haven't included any in this post - I just couldn't choose between them all. If Ruth's work is new to you, you are in for a delightful surprise ... enjoy!

Between recent family visits and reunions and making Christmas cards, I've been stitching in the intuitive way I so often do. This time, the inspiration has been the vegetation and summer growth in a Cotswold meadow.

I worked on pieces of painted and printed silk with Madeira machine thread. I quite often use machine thread to hand stitch when I want an understated effect and especially when I'm using seeding stitch.


And a small snippet from the resulting pieces is here ...

There will need to be decisions about where to go next ... Do I cut the work into even narrower strips and invert some, or hang them in a frame as they are? How to edge the pieces?

I have a very good stitching friend locally who will, no doubt give me her views when I meet up with her on Friday.

When I've decided, I will post the final result.
Posted by Charlton Stitcher at 18:24 10 comments:

Glimpses of the tail end of Autumn

I took a walk around our garden on Sunday afternoon with my camera round my neck, seeking out the last colours of autumn. There were some - just a few - leaves lingering on the trees - amazing for the first day of December. I don't ever remember autumn being so late.

First of all, looking across the fields beyond the garden, a sycamore (maple) and an oak ... 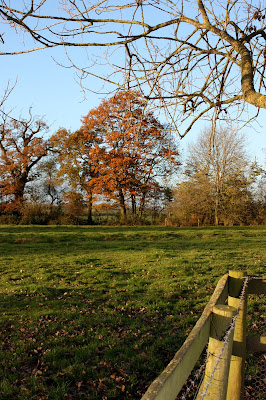 ... then a silver birch in the garden towards the house ... 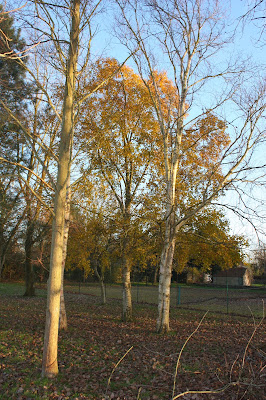 clematis over the stone mower shed ... 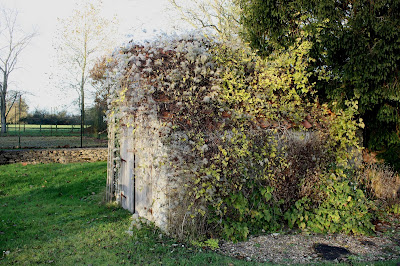 and a splash of rich red berries, waiting for the annual flock of fieldfares ... just hope I catch them visiting ... 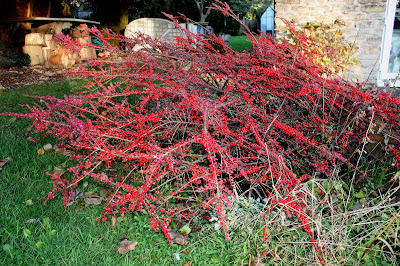 Towards the end of the week, a brief cold snap is forecast so this I'm sure will be the last of the golden leaves for this year.

I have a one track mind right now - landscapes, small, simple - and this time with a vague hint of Christmas.

The card images from Friday have changed somewhat as they always do, with colour and balance different but only slightly so far. I've had fun arranging the latest batch of little landscapes into a grid before sticking them down onto their cards ... 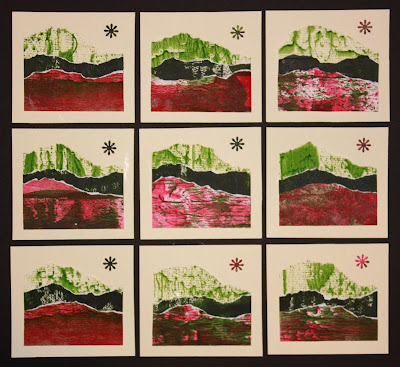 But now, I think I want to change the colour more dramatically so there's another grid with landscapes haphazardly placed upside down to help me look at them differently. Inverting and enhancing the colour has taken me still further ... 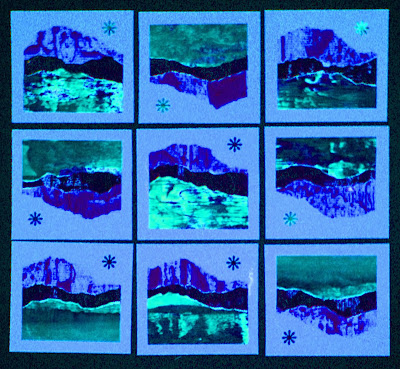 ... and now, I've turned them on their sides and played further with the colour ... 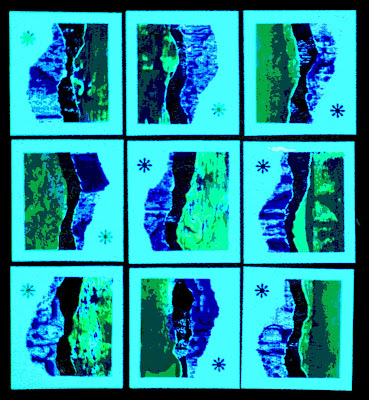 I've had trouble getting the colours to look icy and cool enough but this exercise seems a real help. I quite like the way the most distant colour is strong and dark. Now I want to try them out on a white ground which may prove different. If they're worth posting then I will post - if not, I'll (thankfully) stay silent!

Posted by Charlton Stitcher at 17:39 6 comments: