A small experiment today juxtaposing torn up scraps of tree images taken in Scotland over many visits ... and with colour manipulated with the help of Adobe Photoshop ... 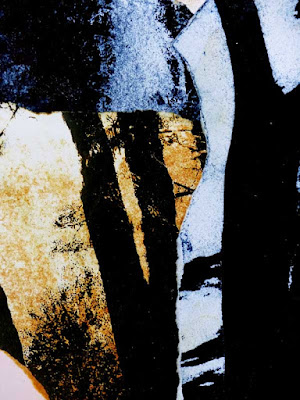 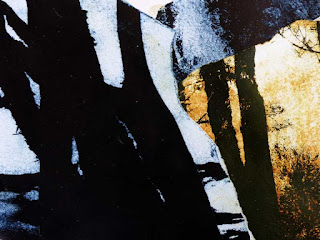 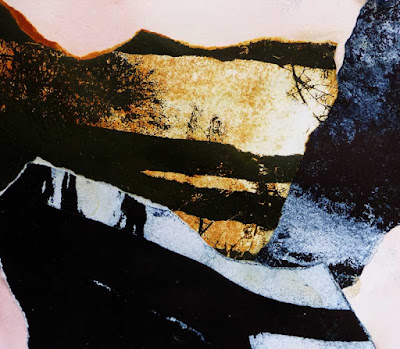 It's amazing the fun to be had with random scraps of photographs laid against one another and then cropped and flipped and rotated ...

Posted by Charlton Stitcher at 20:24 6 comments:

I'm playing with the colours and barrenness of the Red Centre of Australia and the sudden contrast of an isolated settlement. We saw much vegetation ravaged by fire, with small trees and scrub against the extraordinary red earth and the distant blue hills. 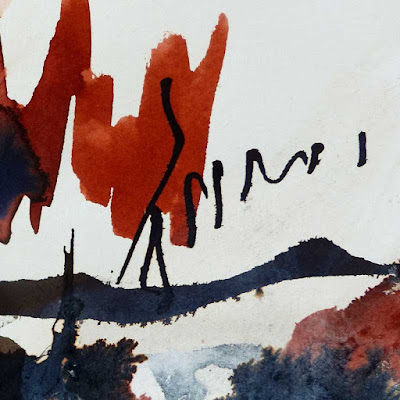 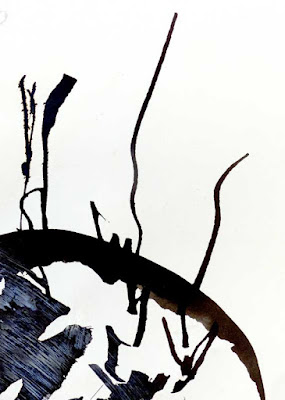 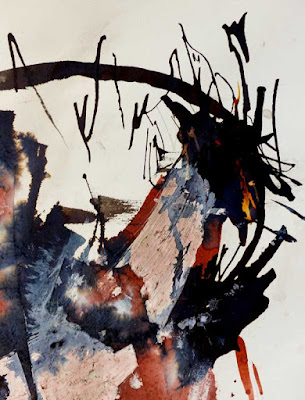 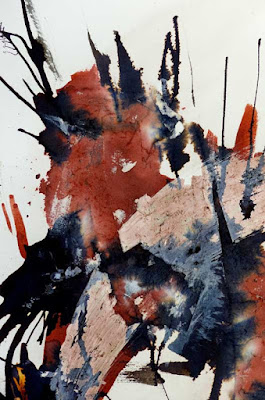 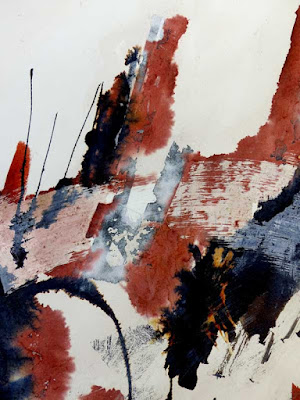 The isolation of the thousands of miles of hot, barren scrub which separated those tiny settlements has stayed with me down the months. It is extraordinary how some newly-seen landscapes can haunt the memory with intensity and provoke such a lasting response in the imagination.

Posted by Charlton Stitcher at 15:40 4 comments:

I blogged here last week about ways of working with images following a weekend course with Sue Brown in Cheltenham.

The easiest and least 'equipment heavy' of the image transfer techniques we used was acrylic paint transfer. Since then I've been exploring further, for now, keeping it simple and combining with perhaps only one other medium.

For this, good quality photocopies of clear images (inkjet printed copies don't work so well, I'm told, though I've yet to try this out), some white acrylic paint and a bowl of water are all that is needed. The ground is prepared with the acrylic paint, the image is placed face down into the acrylic paint and allowed to dry completely, and then the paper backing of the image is rubbed off carefully with a damp finger to reveal a pleasantly muted version of the original.

A simple photo of scots pine trees adjusted for colour in Photoshop, parts of the tree trunks picked out in black Quink ink when the image was still wet after the removal of the paper backing, and the image lines picked out in grey Pitt pen ... 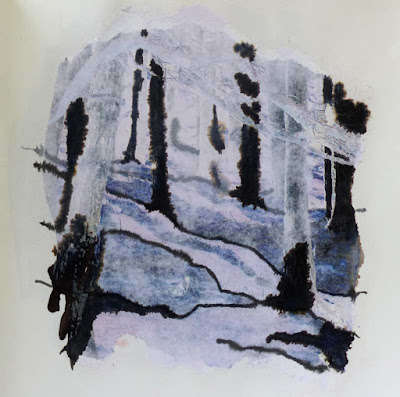 Another image of trees, this time in black and white, photocopy torn into strips, part of the ground painted with black Quink ink when the papers were all still wet so some bleeding into the image occurred, and the main lines picked out in black Pitt pen. 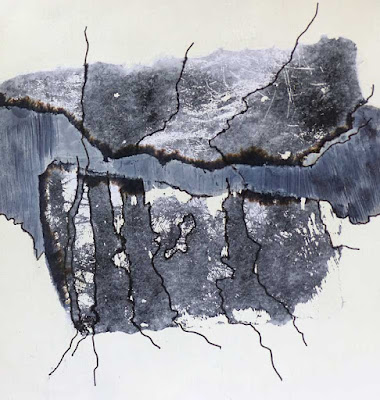 There will be no time to pursue this for a couple of weeks but I'm looking forward to much more experimentation and to including more media (other inks, bleach, other images ...) ... fun ahead!

Posted by Charlton Stitcher at 20:06 2 comments:

Today was the second outing of our drawing group here in Wiltshire. We are planning (very informally) to meet once a month and each time to select a different venue in the area.

This time, in lovely warm spring sunshine, we went to BlakeHill Farm Nature Reserve near Cricklade. Following the unusual spring and the last 2 or 3 months of  unusually cold temperatures, there was unfortunately not as much growth in the meadows as we expected and the landscape was very green-dominant, However, we found a pleasant spot to sit and draw and produced several quick sketches of grasses and a large willow.

My plan for the afternoon was to experiment with some drawing equipment I've had for some time but which I've rarely used. I made several simple impressions of the grasses and drew the base of a large willow tree. With the predominance of green, this was an excellent opportunity to try out the range of greens available in each of the media (and to find them rather wanting in some cases!)

First of all, simple oil pastels ... 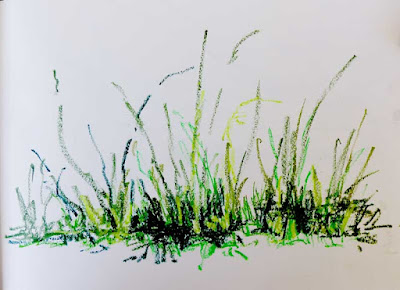 Then Cretacolour Aquastic water-soluble oil pastels that allowed me to wash over my drawing to produce an effect rather like watercolour. I felt that this lost some of the definition and spontaneity so I added some extra grass stalks with my sepia Pitt pen (rather too fine to show up well here). 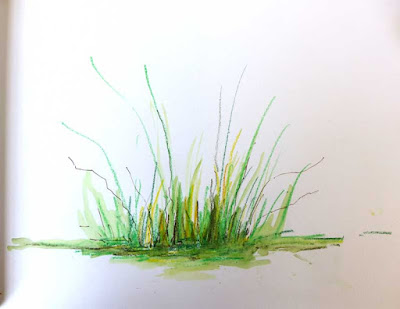 For the last of these three, done in around two minutes, I used my Koh-I- Noor palette for increased strength of colour on a small study. 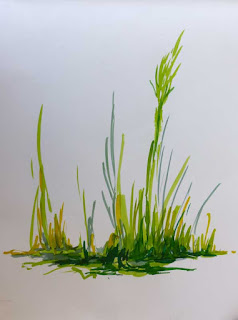 And lastly, I took a selection of drawing pencils (from B to 4B) and sketched the base of the large willow tree. 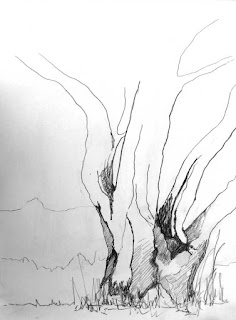 This Nature Reserve is a former WW2 military airfield which is gradually being turned back into hay meadow and pasture. Hay is cut in July after the skylarks have nested and there is much work being done to return the meadows to wildlife rich habitat. As it says proudly on the website, 'On this one reserve, we are meeting more than 45% of the government's 10 year target for restoring hay meadow in England!' 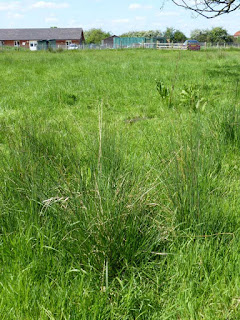 It is a pleasant, if rather flat, expanse of grassland. It will be interesting to see how it develops as the haymeadow matures. On the notice board at the entrance was a chalk board onto which other visitors had written birds and other wildlife seen. I was delighted to see two mentions of a cuckoo. We haven't heard one of those here for a long, long time. It's good to know that they have been present in the area, even if in very reduced numbers.

Posted by Charlton Stitcher at 22:05 4 comments:

Gems from my photo files

During a cull of the many unwanted and duplicate photographs (hundreds, in truth) that were taken on impulse during trips away last year, I came across a few gems that I'd long forgotten. These, now manipulated in Photoshop, are of buildings and structures and, like those posted before, have set me thinking and planning further woven pieces. They will need to be simplified (a lot) from these originals but each suggests to me that it contains promising shapes and lines to exploit. 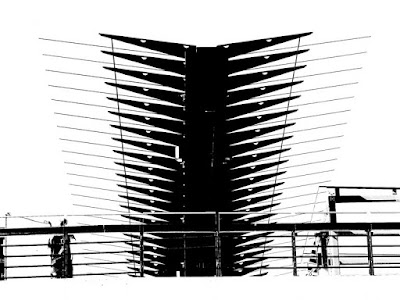 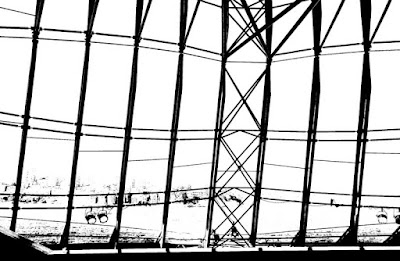 Another version of a recently-posted weaving? 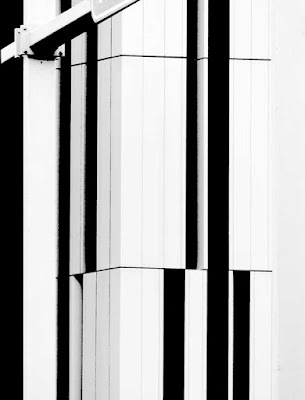 In need of tweaking and playing with colour but interesting shapes and angles ... 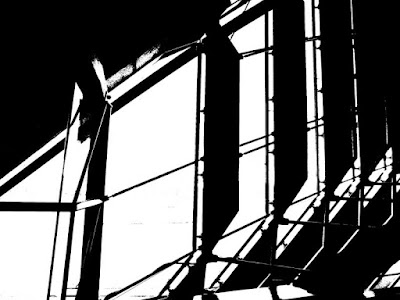 And lastly, much simplification and a touch of colour to play with? 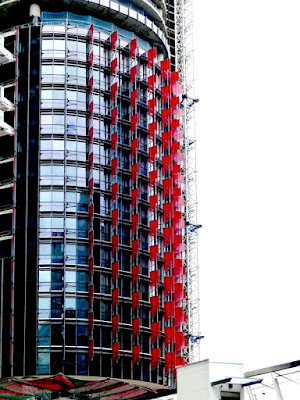 For those interested, all the original photos were taken in Sydney, several at the Opera House and the rest during gentle ambles around the city. There was such a feast of amazing modern architecture. I fell in love with it all and took many (too many?) photos ...

Posted by Charlton Stitcher at 13:45 2 comments:

Last weekend, I spent a fascinating weekend with Sue Brown up at the Yard:artspace in Cheltenham. This time, we explored mixed media techniques, directly transferring and working with images.

Particularly, we used gum arabic transfer and acrylic transfer to add photocopied images directly onto cartridge paper. We then added wax resits, inks, bleach, overprinted, added embossing stamps and even punched small holes. The results were a series of complex images and interesting surfaces which we made into little books on the last afternoon of the workshop. 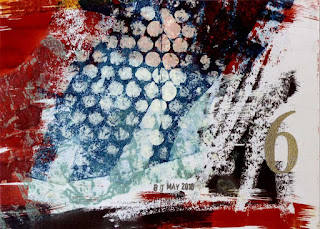 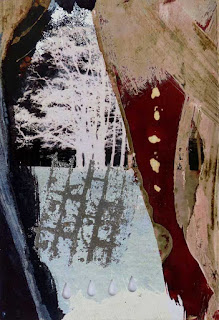 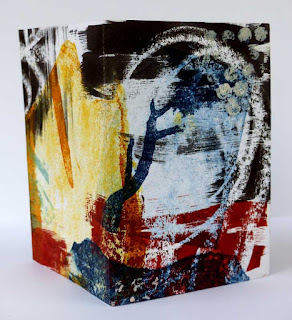 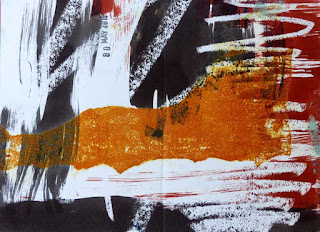 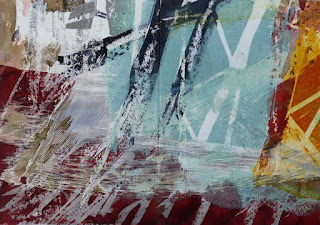 I thoroughly enjoyed this combination of techniques and the dense, largely abstract images that resulted. I'll certainly be exploring this way of working further, perhaps exploring some of the techniques separately or in less complex combinations, at least initially.

Posted by Charlton Stitcher at 10:55 6 comments:

Finding time and images that are interesting to post has been hard recently. Visitors and a short trip away, a big spring clear out of things no longer needed (vital in both work room and wardrobe after five years in the same house and no real action on that front) and the decision to return to weaving have all kept me away from my blog.

However, much of the clearing out is now done (not all, you note), the visitors whose company we've much enjoyed have gone home and my weaving has reached a stage where there is something that is I hope of interest to show. 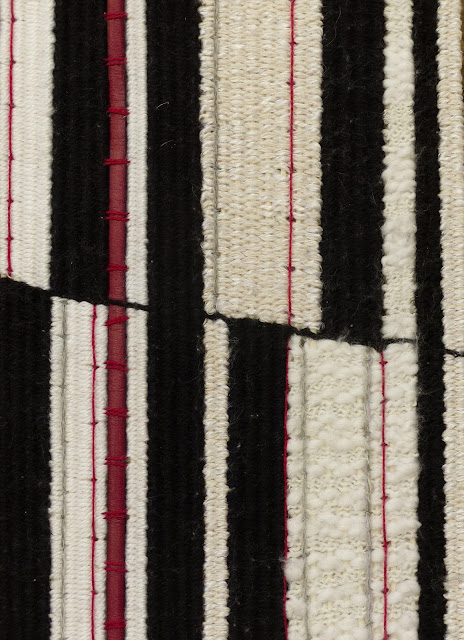 When finished, the piece will measure approximately 35 by 30 cms and is based on several photographs I took of a wonderfully graphic highrise building in Sydney last autumn. I'm weaving the strips with a weaving needle and then stitching them together on the reverse. I'm adding couched threads to the surface. That sliver of red on the left is a narrow ribbon of leather which I've integrated into the piece to suggest the shiny nature of the building and to give contrast with the yarns I'm using in the rest of the work.

There is still much to resolve but so far so good. If it works well, I have plans for further weaving based on other modern buildings seen on the same trip - a much-needed change from stitching and working directly with my photos.

Thoughts about where to take that work are on-going. I often find that a change helps the progress of other, quite different work. The brain seems to go to work behind the scenes and present new thoughts unbidden. I hope it will work this time!