I've just returned from a lovely weekend in Northern France with a Scottish-French twinning group (our links to this group are complicated!). This is always such a fun experience - lots of socialising and conversation, and of course, because we were in France, great food and wine. 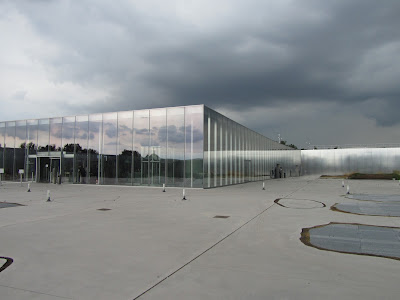 This time, our French friends took us to the newly opened Louvre Museum in Lens, Nord Pas-de-Calais. A brilliant afternoon was spent browsing beautiful objects in a lovely space - one of my favourite occupations when on holiday so I felt very lucky.

The new building was designed by the Japanese firm of architects, SANAA and built on the site of an old coal mine in the city. It's glass fronted and magnificent, especially as here with thunder clouds around it.

Louvre-Lens houses a selection of objects and works of art from the Louvre in Paris, some there permanently and some on temporary loan. It was built as part of the French government's policy of bringing galleries and art works out into the more rural and often depressed parts of France. It reminded me of the famous galleries increasingly found away from London here in the UK - Tate St Ives, Liverpool and Margate, and now, I hear, the V & A in Dundee - can't wait to see that one on one of our visits to eastern Scotland. 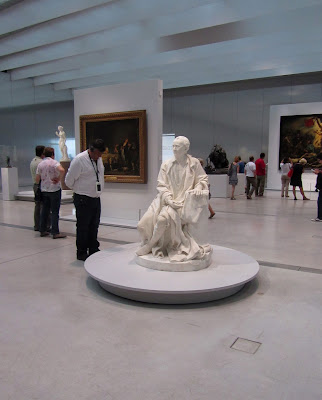 In this museum, the artefacts are organised chronologically from the very earliest which dated from about 3500 BCE right through to the end of the Nineteenth century. This enhanced the contrast between the ancient and the more modern and focused my thoughts on the extraordinary skills of ancient civilisations and the beautiful objects which the people made so long ago with such simple tools.

The gallery is open in design and flooded with a wonderful muted light. There was plenty of space to enjoy the exhibits, both close up and from a distance. On the day we visited it was full of visitors (many of them children) but it didn't seem crowded at all.

I've included below photos of the objects I most enjoyed - all as it happens from very early times.

There was a wonderful figure of a woman possibly made in Afghanistan between 2300 and 1700 BCE ... I just loved her controlled demeamour  ... and those feet ... 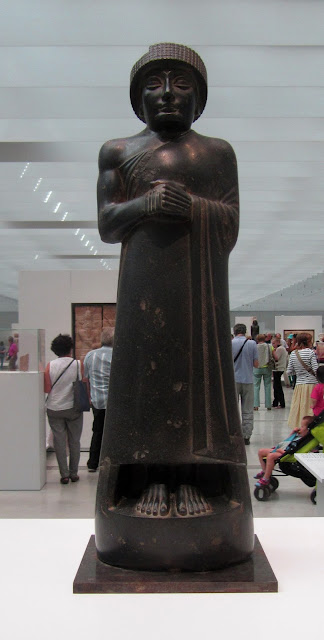 ... and then there was a delightful vase in the shape of a hump-backed bull, thought to have been made between 1400 and 1100 BCE by a nomadic tribesman, probably from Iran, and so extraordinarily modern looking (Henry Moore perhaps?) ... 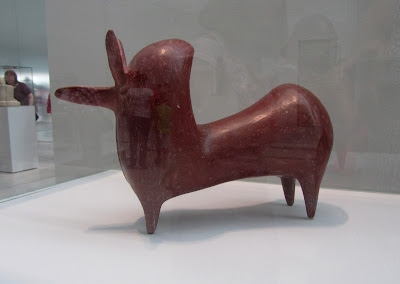 ...but I think my favourite object of all was a small tablet of cuneiform writing scribed originally into damp clay. This was made around 2000 years BCE with text in Sumerian. It was a letter from a mother to her son. I found it very moving as I have a much-loved adult son - so perhaps this was my favourite not so much because of its actual appearance but because of the personal nature of its message and the possible contact with loving family life in another era. Wouldn't you just love to know what she said to him all those years ago? 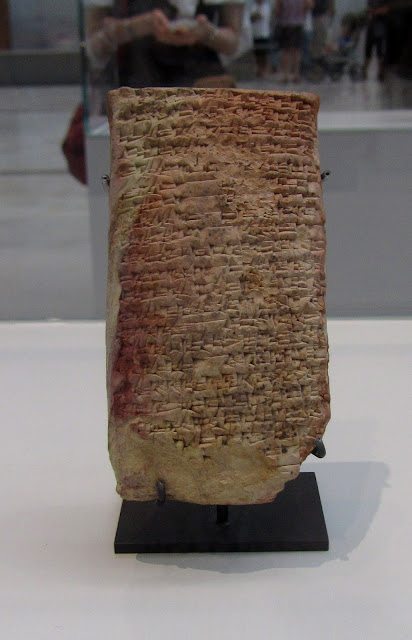 Whilst this museum is obviously no match for the Louvre in Paris, should you ever find yourself in this interesting and un-touristy part of France, it is well worth a visit, if only for the most praise-worthy efforts of the French authorities to improve the reach of its museums and to revitalise a very run down area. The only criticism I have of the exhibition is that it contained nothing at all from the twenty-first or even twentieth centuries. The contrast possible between very modern artefacts and the ancient objects shown here would have been even more interesting ...

Posted by Charlton Stitcher at 12:31 4 comments:

I've begun another weaving sample, this time closer to the large piece I have in my mind and representing the line of the Cotswold Hills, visible if you drive along the M5 motorway from Bristol to Gloucester. 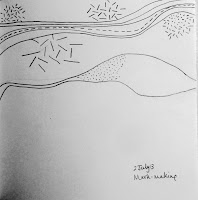 I've been planning out some possible weaving lines and perhaps some stitch to go over the top. Photographing pencil drawings, however simple, and posting them is never very satisfactory, but I hope these pictures give an impression.

There are other ideas for these stitching lines and they reflect also the lines used in my black and white piece I stitched earlier .. too many ideas buzzing around. 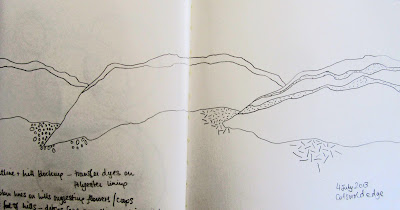 Posted by Charlton Stitcher at 20:58 2 comments:

I've been weaving this week, sampling weft patterns and practising my technique after quite a long time away from the craft, especially tightening the warp and keeping the weft even - and waistless! 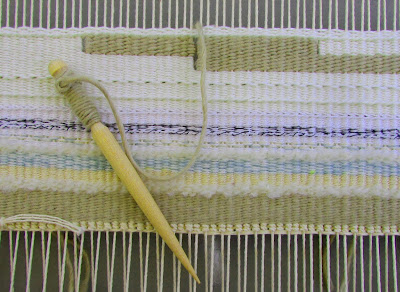 It's been a very therapeutic pleasure as weaving always is for me. The repetition and gently evolving growth of the work has a most satisfying quality.

After the black and white and bright colours of recent times, I decided on subtle and quiet - more gentle therapy. Though I'll have to watch that. There's a point where subtle and quiet meets just plain boring.

Still, the sample does go some way towards the colours of the Cotswold stone round here and this was what I was after. I'll need a slightly different colour range and a stronger rust tone in there somewhere, perhaps contrasting with some soft and gentle green.

Waistless did I say? How I feel for the weaving with too many holidays and too little exercise. Must remedy the latter. Still I'm not complaining and there will be more of this weaving (and more holidays ...). Quite how it will link into all the other thoughts of the moment, has still to be worked out fully, but I think I'm beginning to see ...

The elusive indigo has indeed been hard to find around here - so I have a bit of a mixed bag this time and no fresh photographs from where I live - but I did perhaps manage to find some indigo in my photo archives and in my stash of fabrics.

There was this beautiful tropical butterfly - I don't know its name, but it was seen on a trip to a butterfly farm in Warwickshire with my daughter, so happy memories too ... 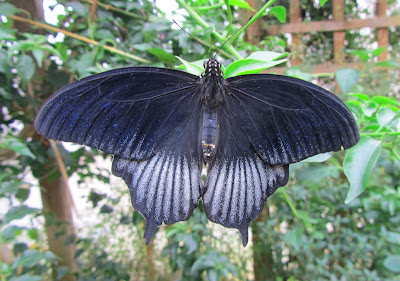 ... and this photograph taken at twilight on a trip to Venice a few years ago ... 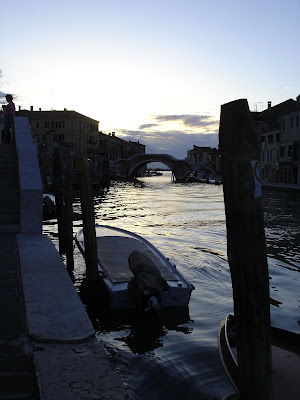 ... and this piece of cotton fabric acquired at a craft fair (can't remember where) and which uses stitch as a resist ... 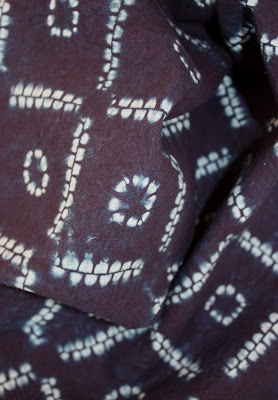 These I felt sure were truly indigo but there is this wonderful old piece of farm machinery - at the muted end of indigo ... ? 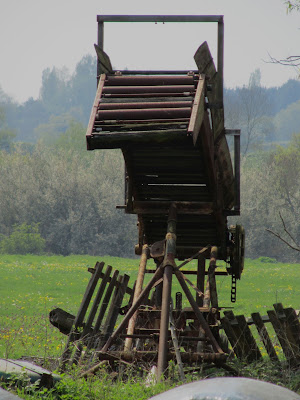 ... and this piece of silk from my trip to Thailand - nudging into violet, ready for the next colour ...? 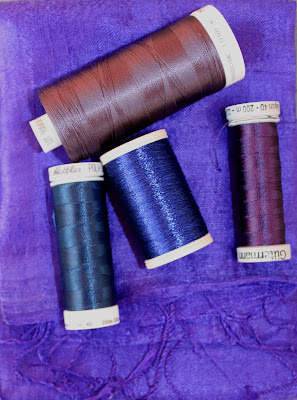 ... and perhaps there could be some indigo in this glorious pile of spun sari silk - a favourite thread of mine - but I am not convinced ... 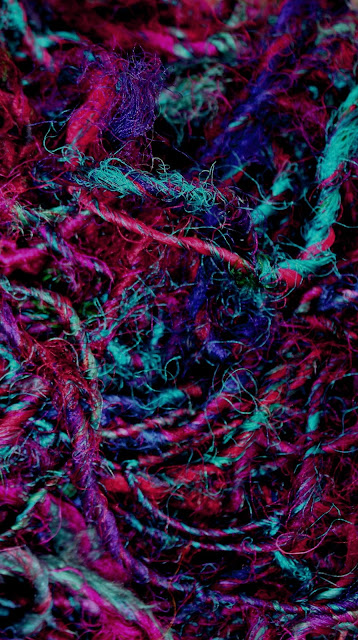 I will leave you to be the judge as I think it's all in the eye of the beholder but looking has been fun.

I had a lovely day yesterday revisiting weaving skills with Great Western Embroiderers, the group I stitch and exhibit with. Sarah Beadsmoore from New Brewery Arts in Cirencester came to run the session and worked with us using a simple frame loom and helping us to create small tapestry weaving samples.


First of all, we warped up simple frame looms with cotton thread, bringing the front and back warps together and completing a row of double soumak - a rug-making technique which involves wrapping the weft around the warps - to give a firm starting row. Then we tried out techniques on our samples.

I had covered all this before many times but it is always good to revisit skills and to remind myself of the basic techniques, especially after a long time gap.

I include here another sample completed with Sarah and also one I did in preparation for a previous weaving project to try out a range of wools and threads, with covering the warp fully and leaving it exposed, inserting printed strips of fabric and then over-stitching with my machine in zig-zag.

I had forgotten how much I enjoy the rhythm and calming quality of weaving. In the past, I have often had a piece of weaving on the go to run in parallel with stitching projects. I've found this very helpful - when one piece of work hits trouble, I can turn to the other for solace. Perhaps the fact that the two types of work are so dissimilar is the most helpful thing. The problems and the pleasures of the two very different means of expression can fuel one another.

Now, I think I will warp up my loom again and try out some techniques and effects for my Stroud series of work. It will give me much-needed variety and a different way of looking at things.

Posted by Charlton Stitcher at 14:57 3 comments:

Workshop on the Web

I subscribe to Maggie Grey's Workshop on the Web and recommend it most highly.

It's published quarterly exclusively on the internet. In each edition there are workshops provided by well-known tutors from all around the world - and available at any time so there is no pressure to complete a workshop on a given day or before a time deadline.

The techniques covered include machine embroidery, hand stitching, and a wide range of mixed media and there are opportunities to explore the use of metals and the latest developments in our field. There are step-by-step details for the techniques and ideas are given for using them creatively ... all a great deal for £20 ...!

From the current edition which was published in June, I have every intention of trying Sherrill Kahn's workshop on Thermofax printing - something I've been wanting to try for ages.

And ... there's a special offer! If you join now, there's a promotion - you'll receive Lynda Monk's and Carol McFee's book 'Stitching the Textured Surface' free - wherever you live in the world. I've got it and it's a really interesting book.

If you're still not sure about this idea, you can investigate the website via the link above and you can even try a free taster to see whether it is for you or not.

I really hope you decide to join..!
Posted by Charlton Stitcher at 12:10 No comments:

And now on the teasel forms, some experimenting with machine stitch - it seems more appropriate and 'spiky' than most of the hand stitch I do.  I intended to post these while on holiday in France with my family but the promised wi-fi connection didn't materialise, so here they are on my return today.

First with colour - layers of sheers and net over-stitched with coloured thread to suggest hill sides and with reference to the teasel head shapes ... 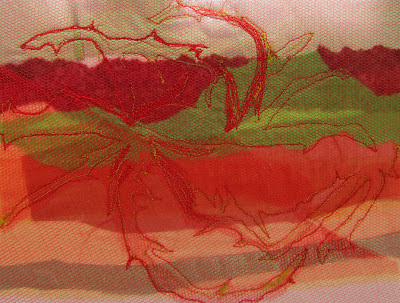 ... and then the stalk pattern repeat completed in black free machining on cream cotton ... 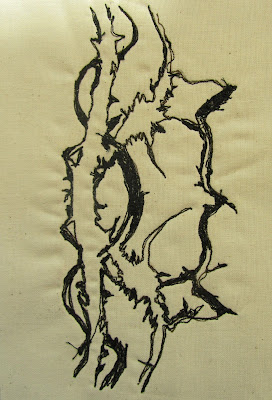 While I've been away I've had no time for stitching but lots of time to think which has been good for me ... so I will start work on the new thoughts in the next few days.
Posted by Charlton Stitcher at 21:43 6 comments: