Moving on with work for Swindon Museum and Art Gallery for the middle of May, I accidentally printed off two copies of an image on organza as well as the single that I had intended on cotton. I was therefore left with three versions on different weights of fabric which set me thinking and overlaying one on the other. I like nothing to go to waste.

The result gave interesting repetitions of the shapes in the original version and gradations of colour to repeat and work on. Quite a lot more playing will be needed to make this usable but I'm fascinated by the subtleties that result from layering one, two and even three sheets of fine fabric in this way. 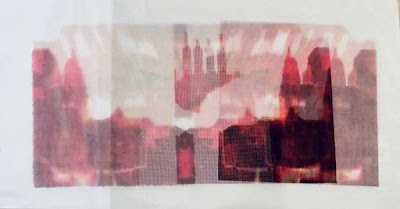 Funny how accidents can often be the start of new things ...

It made me reconsider a fascinating image seen in January in an exhibition of photographs in the Museum in the Park, Stroud. The images were curated and some taken by the group 31 Studio and featured the unique 19th century (and completly new to us) Platinum Palladium printing process initially using glass negatives.

31 Studio were among the first photographers in Europe to revive and specialise in this process after the Second World War and the exhibition showed monochrome prints from the early historical archives right through to contemporary photographers and artists. It was fascinating and my husband and I spent a most pleasurable hour looking carefully through all the work on show. We especially enjoyed the huge range of greys generated by the process, since it produces no abosolute blacks or whites. Even the densest of blacks reveals subtleties and variations on close looking.

The photograph that especially took my eye and that I'm showing in the context of my happy printing accident was one of the Houses of Parliament by Idris Khan in which there had been successive overprinting of the buildings along the banks of  the River Thames. Other examples of his diverse and fascinating work can be found here and here among many other places. 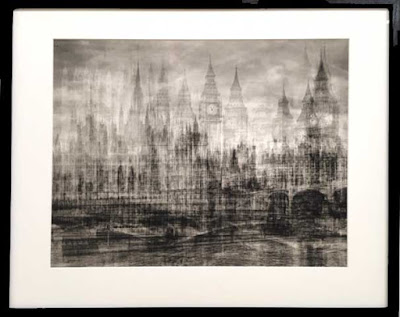 Sadly, this photograph of a photograph (and it behind glass at that) doesn't do justice to the delicate and beautiful subtleties of the image I saw in the exhibition. At the time, I counted at least ten repetitions of Big Ben (the most emotionally loaded and so most noticeable image in the whole) laid one over the other, and moved about and repeated. Closer looking revealed so much other repetition.

This dense visual layering and repeated imagery is seemingly characteristic of all Khan's work. This quote from artnet, which amused me with its comment on the value of Photoshop, summarises his process.

Khan's work is connected through his intricate process of layering multiple images. He often blankets surfaces with sequential images - either captured through staccato photogaphy or through the frames of a video - until his work is a blurred composite, offering a condensation of time into a single point that fluctuates between representation and abstraction. ' A lot of people in the art world hate to use the word 'Photoshop', like its cheating or easy or something, ' he once eplained of his process. ' I say b------- to that - for me, it's my tool, my paintbrush if you like, and lets me create my own visual language.'

I can only say how much I share his views of the value of Photoshop!

Posted by Charlton Stitcher at 16:15