On Tuesday, I went with my husband to an exhibition of Japanese Ukiyo-e prints in Stroud at the Museum in the Park. Ukiyo-e translates as 'Pictures of the Floating world'. These beautiful stylised prints portray an ideal and perfect world where all flaws are removed.

They were created in Japan between 1603 and 1868 in the Edo period. This lasted for around 260 years and was a time of extraordinary isolation in Japan's history. Frontiers were closed to outsiders and the Japanese were not allowed to travel abroad. Commerce was severely controlled and artists had to abide by the regulations of the time laid down by the Shogunate (military dictatorship). As a result, the art developed without any significant external cultural influences. The unique and instantly recognisable art form of woodblock printing resulted, with its extraordinary level of skill. 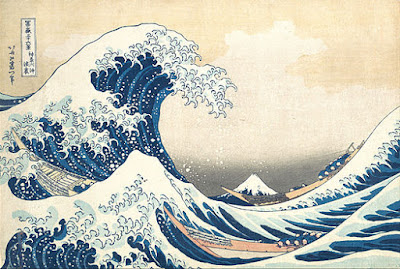 As we had anticipated, we enjoyed the landscapes most of all since we had been enticed initially by promise of Hokusai's The Great Wave of Kanagawa. This we had seen previously at Monet's house in Giverny when we'd been returning from a holiday with our family in France. Time on that occasion had been short and the room where the work was displayed was full of other tourists. We were keen to get a closer and more prolonged look.

We were not disappointed. It was a delight to be able to look at the detail of the tiny figures in the boats and in those extraordinary finger-like waves  breaking with such power and, to my mind, some menace. This piece was the first of his series 'Thirty-six views of Mount Fuji and is the work for which he is most famous. It is probably also the Japanese art work which is most famous in the western world. 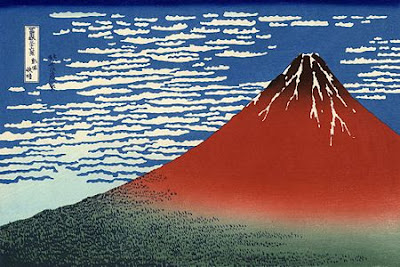 Beside it was hanging another of his 36 views called Fine Wind, Clear Sky or Red Fuji. We hadn't seen this before and were very impressed by the rich colour and the graphic simplicity of its design. It contrasted strongly with many of the other more detailed prints in the exhibition illustrating folk tales or showing samuri warriors or 'beautiful women'.

There were also many superb prints by Hiroshige who is considered to be the last of the great masters of the tradition. We especially enjoyed his Snows of Kanbara with its limited palette and the small domestic details of those little figures, bent against the cold. 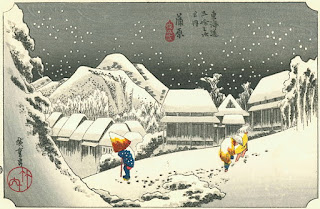 It was also most interesting to see the lovely The Plum Garden in Kameido, particularly as we had previously seen it in the Van Gogh Museum last year in a beautifully curated exhibition exploring the links between Van Gogh and Japanese art. We had then seen also Van Gogh's interpretion of this work alongside the print. It was fascinating to make this link again. 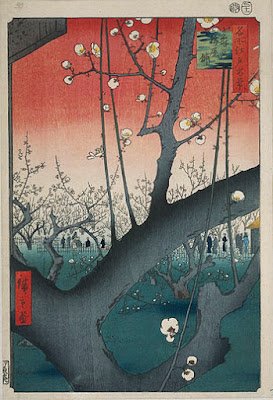 Hiroshige The Plum Garden in Kameido

Although I've focused here on a very limited number of the landscapes in this small but well-curated exhibition, there was so much else to enjoy. For those interested and living locally, it continues until 24 March. There is also to be an exhibition at the Bristol Museum and Art Gallery from 18 May to 8 September, which promises on the Museum website to feature life in the city of Edo (Tokyo) and the printing process itself.

Posted by Charlton Stitcher at 16:44